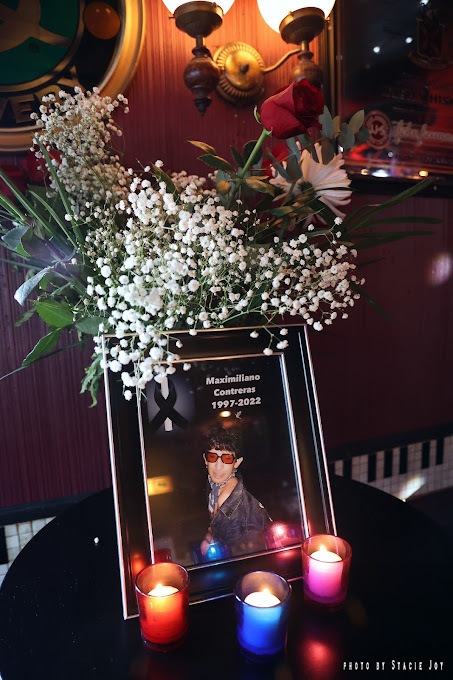 Photo by Stacie Joy
There's a memorial at the Parkside Lounge in honor of Maximiliano Contreras, a bartender here who died in a fall at the Delancey-Essex station early Sunday morning. Contreras was 24.
Parkside ownership said they are gutted by the loss. In an Instagram post, they described Contreras this way: "He was such a bright light, kind person and utterly unique."
At the bar on Wednesday, staff and patrons shared remembrances, including how funny Contreras was with snappy lines, how he handled patrons at the bar (a friend to everyone) and how universally adored he was.
Contreras, who lived in Ridgewood, was born in Mexico, where his family remains. His friends have launched a GoFundMe campaign to help his family pay for funeral expenses.
According to published reports, Contreras died after hitting his head in a fall onto the J train tracks at 1:45 a.m. Sunday. Police believe he may have been drunk and lost his balance.
"There are very few people I look forward to knowing the rest of my life, and he was one of them," his longtime friend Angus Baigrie told the Daily News. "He was incredibly funny. Just a gorgeous human being who had this hilariously acidic tongue that was rarely unkind."
Posted by Grieve at 6:00 AM

This is so sad and tragic. Condolences and hugs to the whole Parkside family.

So sorry for the tragic loss of this young man's life and all that he should have had to look forward to at the age of 24.

It is certainly a testament to the beauty of his personality and soul that he is being remembered with such love by his friends and chosen family here, and that funds are being raised to pay for his funeral expenses and to have his body returned to Mexico.

May he rest in peace, and may the memory of his bright and loving light continue in the hearts of all who were privileged to know him.