More on the Day of the Dead bike ride 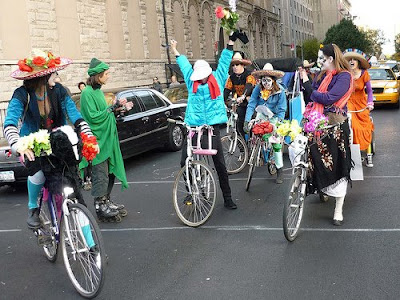 I had a post Monday on the Day of the Dead bike ride in the East Village. The organizers sent me this wrap up of the events that took place Sunday:

Cyclists, zombified with white and black face paint and dressed in bright, festive colors, took downtown Manhattan for a two hour ride on Sunday, November 2. They rose the dead with loud cheers, "viva bicicletas!" (live on bicycles) and "celebramos los muertos!" (celebrate the dead), in addition to visiting sites of cyclists hit and killed by cars and holding mock funerals.

Village environmental group Time's Up! organized the Day of the Dead bike ride in order to promote safer streets and remember and celebrate the cyclists Brandie Bailey, Rasha Shamoon, Brad Will and their community.

A garbage truck hit Bailey on Houston St. at Ave. A in 2005. Cyclists stopped first at her white "ghost" bike memorial, in order to celebrate the lives of all people killed on this dangerous street. After a moving speech that ended with, "let's celebrate the dead and fight like hell for the living," cyclists cheered and danced to Mexican music performed by former Blood, Sweat and Tears trumpet player Lew Soloff.

Next cyclists rode to where Shamoon was struck by an SUV at Delancey and Bowery on August 11, 2008. They held a 'mock" funeral in the divider of the intersection. Then they theatrically "died" and were "buried" under the wheels of a parked taxi in the Allen Street bike lane, demonstrating the danger caused by motorists parked in the bike lanes.

The final celebration for the dead on the bike ride occurred at a community garden, where Will dedicated much of his activist effort when he wasn't promoting bike riding. Cyclists ended their ride at St. Marks Church, filled with renewed energy to continue their fight for safe streets for all present and future cyclists.

They asked Mayor Bloomberg to join them in the quest for safer streets for all the New Yorkers, who are often eager to get on their bikes, but discouraged by unprotected, un-enforced bike lanes. They called for the city to honor its commitment to making the roads bike-friendly and green.

There are more photos like the one above on the Time's Up! Flickr page.
Posted by Grieve at 6:54 AM No comments:

The Day of the Dead Ride 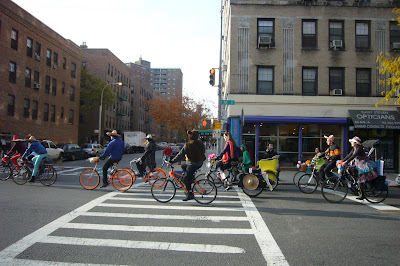 Yesterday marked the Day of the Dead Ride in the East Village as the group celebrated cyclists -- both present and past. According to times-up.org, "We will bike and dance our way through the East Village, visiting ghost bikes, honoring the memory of those who have been killed, and demanding safe streets so that future riders can ride peacefully in a sustainable city." New York magazine reports there are 35 ghost bikes in the five boroughs.

Here, the group remembered Brandie Bailey, who was struck and killed in May 2005 by a private sanitation truck on East Houston Street near Essex Street. She was 21.

Posted by Grieve at 6:56 AM No comments: