What Koi needs on the Bowery 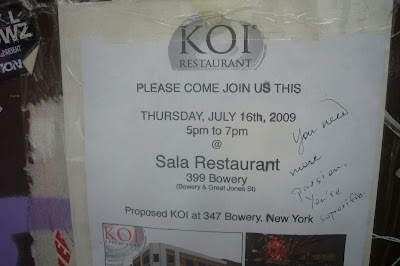 Fresh graffiti on the old Koi notice on the Bowery. And the second part is difficult to make out. Soporific? 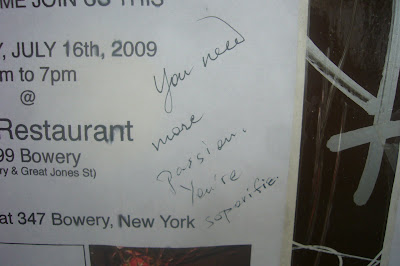 Previous Koi coverage on EV Grieve.
Posted by Grieve at 6:37 AM 3 comments: 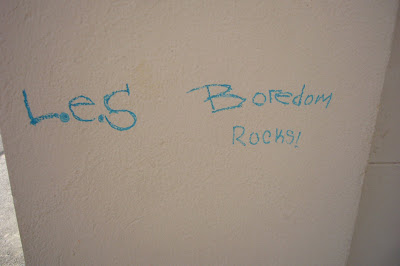 Mason Dixon and other CB3 highlights (The Lo-Down)

More vintage NYC postcards (This Ain't the Summer of Love)

At Superdive: "The main problem is how drunk the people who go there are when they depart. They stand outside and scream at each other as though they are all hard of hearing even though they are way too young for such problem... I can hear this drama, most loudly on Friday and Saturday nights, from way around the block. Seriously. They aren't even on my block and I can hear them around the corner and up 76 steps." (Blah Blog Blah)

"The storefront vacancy rate in Manhattan is now at its highest point since the early 1990s — an estimated 6.5 percent — and is expected to exceed 10 percent by the middle of next year." (The New York Times)

From The Wall Street Journal:
"During the real-estate boom, New York had between 4,000 and 6,000 sidewalk sheds. During the real-estate bust, New York still has between 4,000 and 6,000 sidewalk sheds. Construction sites have gone dark, but façades keep buckling and cornices keep cracking as if nothing had happened to the economy.

Shed builders may be the only busy hardhats left in town. In some cities, sidewalk sheds go up when work is in progress. In New York, especially if landlords are broke, sheds go up and stay up because work is making no progress. Good times or bad, the sidewalk shed is one of those things that make New York New York.

"They're ugly, dismal and ubiquitous," says Rick Bell, who heads the American Institute of Architects' New York chapter. "They define our pedestrian experience -- like the arcades of Bologna."
Posted by Grieve at 1:11 PM 3 comments: