12 years later: Looking at the reign of Bloomberg

The new New York magazine unleashes a whole lotta Bloomy this week. (Find the package of stories here.) I'm still wrapping my head around it all...

The present, however, hasn’t always gone so smoothly. For an irresistible city, New York can be awfully ugly. Ghastly glass towers have laid waste to entire neighborhoods, and sharklike chain stores have swallowed small businesses. The once-derelict industrial zone along the Greenpoint-­Williamsburg waterfront metamorphosed into a new, high-density neighborhood, which would’ve been great, except that the change resulted in a phalanx of big ungainly buildings with a paltry, broken strip of greenery out front. The permissive rezoning of Brooklyn’s Fourth Avenue, too, produced buildings of such slipshod “luxury” that the Wall Street Journal columnist Robbie Whelan called it a “canyon of mediocrity.”

Why did so much terrible stuff get built? The answer is that bad, overpriced buildings are the price of civic ambition. In lean times, most architecture is crap because only what is cheap gets built; in better times, most architecture is crap because developers can’t wait to start cashing in. Bloomberg made New York safe for high-quality design — and at the same time triggered a plague of prosperous awfulness. As long as the city remains attractive, there will always be money in ruining it.

During the 18-minute speech, Bloomberg showed that his staff did some research, localizing several references, including: "But it is true also that all of you survived thousands and thousands of slices of Two Bros pizza. I will make a point to stop and have a piece of pizza at Two Bros. I hope it’s really thin. That's the way I like it."

Later, at the 10-minute mark, the Mayor discussed the importance of giving back... and he referenced one of our favorite bars around – the Coal Yard on First Avenue.

"I started working on Wall Street. My first job was working in the cage counting securities in my underwear because it was not air-conditioned in the summer. My first year's bonus was forgiveness of the loan they gave me so that I could afford to go to work there, because they paid a lot less than other firms that had offered me a job.

"But you can always give something. And so I gave $5. That $5 would be about $37, which I'm guessing is probably less than what you’d spend in a night at The Coal Yard.

"Actually, if you spend more than $37 at The Coal Yard, the next morning you'll probably wish you had donated the money."

The joke received some chuckles from the crowd. Points for trying?

As for the big issue at hand with Cooper Union ... students have been occupying President Jamshed Bharucha's office since May 8 to protest the school's plan to charge tuition starting next fall. The New York Times has a recap of the address, and notes that some students were disappointed (but not surprised) "with what they saw as Mr. Bloomberg's evasion of the free education issue."

And you can find the entire address here.

New York – We are proud and delighted that Mayor Michael R. Bloomberg has agreed to deliver the commencement address at The Cooper Union’s 154th graduation ceremony in May, said Jamshed Bharucha, President of The Cooper Union for the Advancement of Science and Art. At commencement, Mayor Bloomberg will receive the degree of Doctor of Humane Letters (honorary).

Commencement 2013 is scheduled for Tuesday, May 29th in The Great Hall of The Cooper Union, East 7th Street at Third and Fourth Avenues, New York.

“Mayor Bloomberg’s transformational leadership to improve education, the cityscape and the built environment, as well as public health, while encouraging smart and sustainable economic growth distinguishes his administration. His persuasive advocacy for gun control and immigration reform resonates across the country. His determination for New York to thrive as a world class applied science center will draw the best and the brightest for decades to come. His record and vision provide an example for our graduates who want to contribute their talents to New York and beyond. We are honored to have him deliver the keynote address at this year’s commencement,” said President Bharucha. 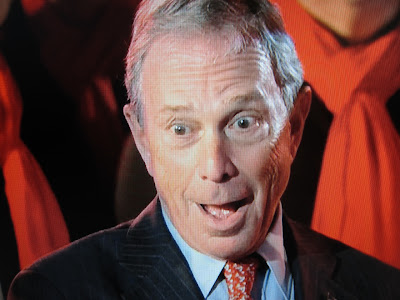 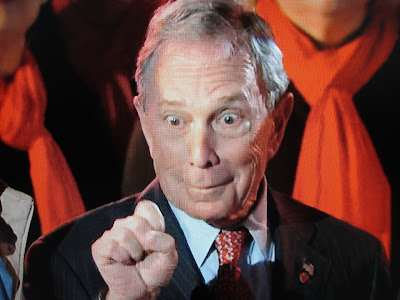 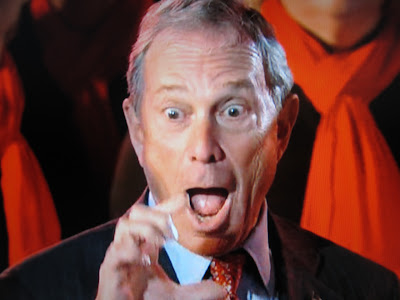 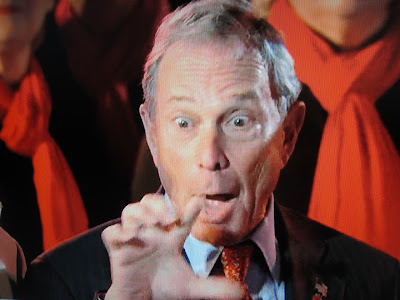 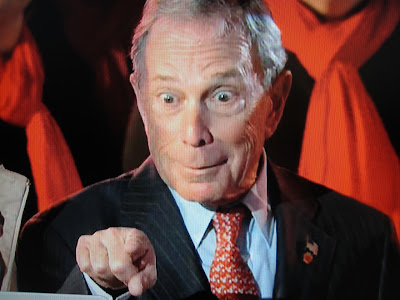 At the end of Christmas in Rockefeller Center. Just curious who — or what — the Mayor spotted.
Posted by Grieve at 9:05 PM 14 comments:

Starting today, you may no longer smoke in Tompkins Square Park 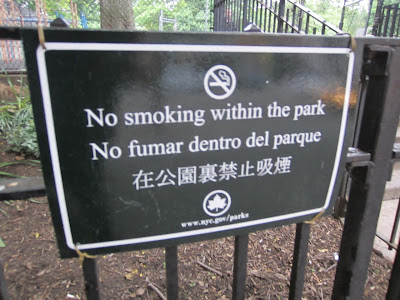 As of today, all public parks, beaches and pedestrian plazas in New York City will be smoke-free, enforced by a $50 fine. If you're having fun while smoking, then you will be fined an additional $25.*

You can read about the ban here at the Daily News. In any event, I know that all of you will abide by this. 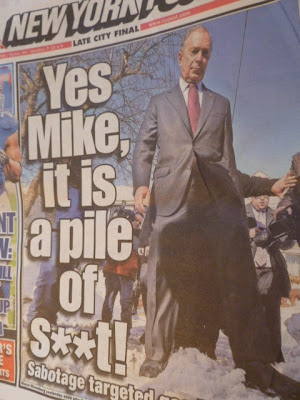 A little gratuitous Bloomberg bashing, if you will

The dangers of the mayor's office trying to be cool 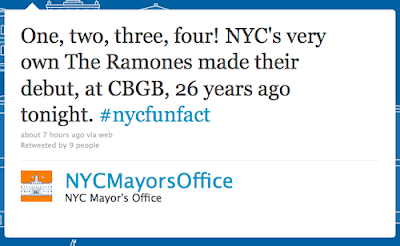 From our friends at Neighborhoodr.... and, uh, as they point out, the Ramones made their debut 36 years ago...

And there's something Bloombergy about Mr. Burns...

Email ThisBlogThis!Share to TwitterShare to FacebookShare to Pinterest
Labels: Mayor Bloomberg, the Ramones 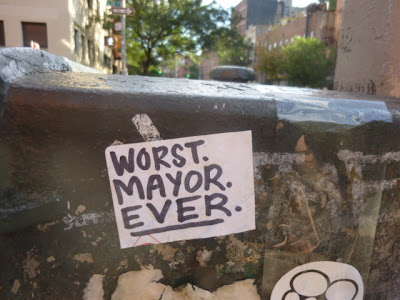 Now we know what Mayor Bloomberg and Diana Taylor have in common -- they were both party animals. In a speech yesterday at Dartmouth, Taylor's alma mater, Bloomberg said, "I remember having nothing but fun in college." The Post's Jennifer Fermino reports Bloomberg also said Taylor told him she skied constantly while attending the New Hampshire university, but he thinks she "drank a lot [and] probably smoked a lot." Bloomberg, who went to John Hopkins, confessed to a dismal academic record: "If you think I don't have 'Animal House' on my iPad, you are wrong," he said.

What has been lost during Bloomy's reign (so far...) 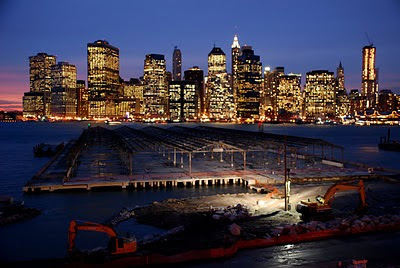 Our friend Nathan Kensinger has an in-depth photo essay on how Bloomyberg's tenure has changed the skyline of NYC... here's an excerpt...:

With the loss of small businesses, the commercial landscape of New York re-oriented towards chain stores - with cookie-cutter exteriors - that could afford to pay exorbitant rents. By mid-decade, New York's commercial streetscape had become dominated by redundancy. A multitude of sterile bank branches opened, while chains like Duane Reade and Starbucks placed multiple store locations within a few blocks of each other, to monopolize neighborhoods. For the first time, big-box-stores were allowed to enter the city, like Home Depot in 2004 and Ikea in 2008, further endangering small businesses.

[Photo by Nathan Kensinger]
Posted by Grieve at 9:05 AM 3 comments:

From the City Room:

To eke out a narrow re-election victory over the city’s understated comptroller, Mayor Michael R. Bloomberg spent $102 million of his own money, or about $183 per vote, according to data released on Friday, making his bid for a third term the most expensive campaign in municipal history.

And the $102 million tab is likely to rise: the mayor has not yet doled out his storied bonuses to campaign workers, which can top $100,000 a person. That spending will not be reported until after his inauguration.

The closeness of his victory is sure to raise speculation about the impact of the term-limits change and how much that served to trump Bloomberg's accomplishments in office. That subject had already dominated conversation at polling places around the city Tuesday.

"The main thing is to get Bloomberg out," said Véronique Doumbé, 52, a filmmaker from West Africa, speaking at an East Village polling place. "I'm coming from a country where the president never wants to leave. Term limits are essential for a democracy."

This mural was created during Art Around the Park in September. This past weekend, it appeared on the gate of a community garden on Eighth Street. 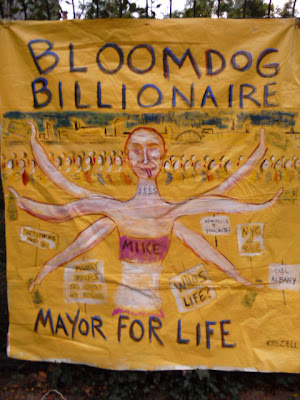 For further reading:
Just Say No (Jeremiah's Vanishing NY)
Posted by Grieve at 6:40 AM No comments: 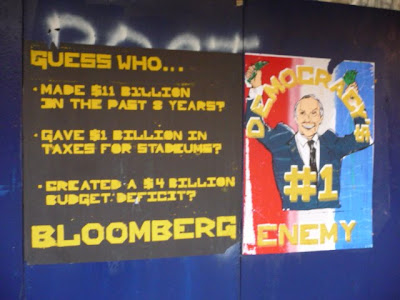 New on the plywood on St. Brigid's along Avenue B at Eighth Street.
Posted by Grieve at 6:45 AM No comments:

"Mayor Michael R. Bloomberg has spent $85 million of his own money on his latest re-election campaign, more than anyone in U.S. history." (The New York Times)
Posted by Grieve at 8:41 AM 2 comments: 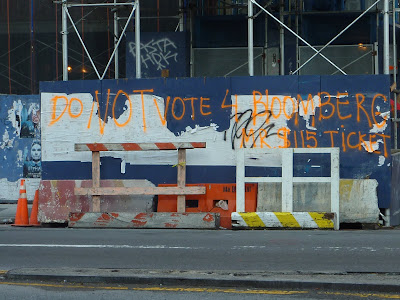 Just a little anti-Bloomy (Mr. $115 Ticket!) graffitti on Cooper Square near Fourth Street.
Posted by Grieve at 6:37 AM No comments:

On Avenue B near Eighth Street. 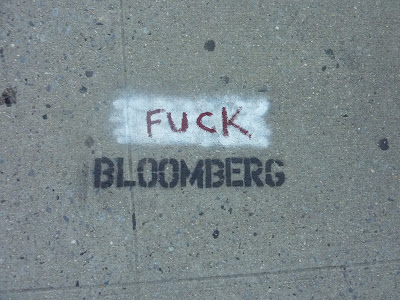 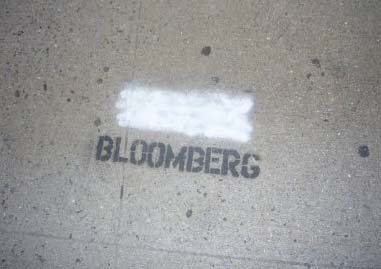 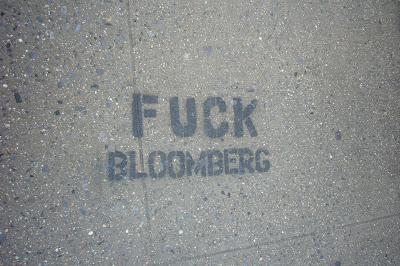 Remember that Jersey Shore Store on Broadway between 11th Street and 12th Street (the one in which the empty kegs were left behind...)...? 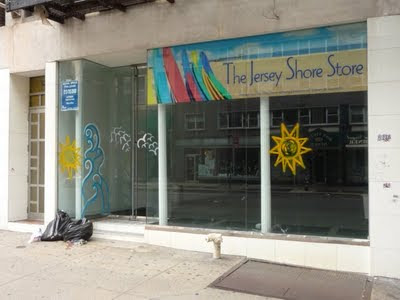 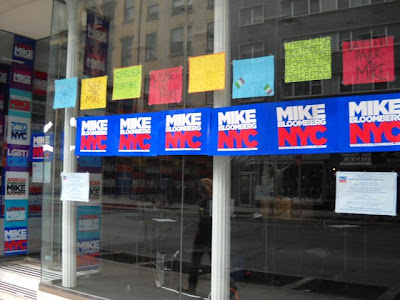 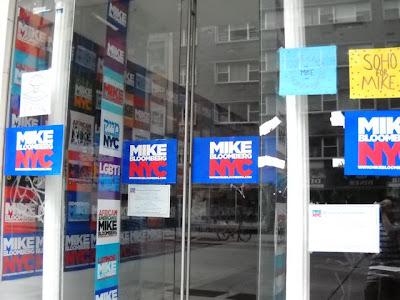 Many thanks to EV Grieve reader Eric for the tip and photos....
Posted by Grieve at 8:38 AM 1 comment:

Bloomy cover-up on Avenue B

Wondered how long it would take for someone to cover this up.
Posted by Grieve at 6:38 AM 1 comment: