Report: Arrest made in armed robbery of Mona's on Avenue B 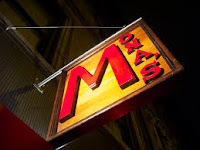 The NYPD arrested a 29-year-old Brooklyn man wanted in connection with four armed robberies in Brooklyn and Manhattan, including Mona's on Avenue B between 13th Street and 14th Street.

Police took Sanjay McBayne into custody on Saturday following a tip through the Crime Stoppers hotline.

Early last Thursday morning, McBayne allegedly walked into Mona’s "and turned a gun on an employee, demanding cash," as Town & Village reported. He fled the bar with $700.
Posted by Grieve at 4:07 AM No comments:

At Mona's, all that jazz, some nights

In case you missed it (like us!), The Wall Street Journal checked in with a piece on Mona's the other day ... with a diary-type entry about the bar's emerging musical showcase... Per the article:

The grapevine has it that Mona's, a plain-looking bar on Avenue B off 14th Street, is ground zero for an emerging late-night scene of young swing and traditional jazz players.

And, during non-band hours, the jukebox is quite good...
Posted by Grieve at 6:42 AM 4 comments: For some reason I came across this listing for Mona's on Not For Tourists:

"Depressing. Recommended."
Posted by Grieve at 2:38 PM No comments: