'FEAST: A Performance Series' returns to a revamped Under St. Marks Theater 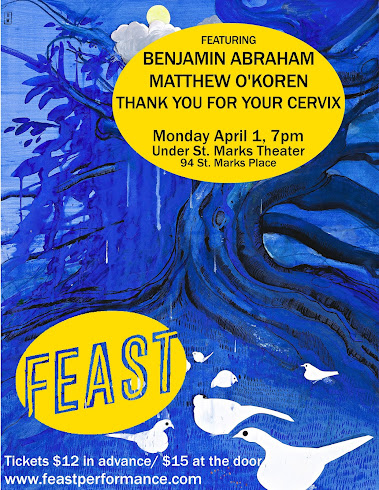 The latest production from FEAST: A Performance Series — a monthly showcase of new work from playwrights, musicians, comics, poets, choreographers, etc. — is tomorrow (Monday!) night at the Under St. Marks Theater.

Folks can use the discount code TSAEF online for $10 tickets, or buy them at the door for $15.

This show also marks good news about the Under St. Marks Theater, 94 St. Mark's Place between Avenue A and First Avenue.

In February, the theater had to close for emergency repair work after a broken pipe caused water damage in the space.

We're told the venue reopened for rehearsals this space week... the repair work included other enhancements, such as the addition of a second restroom.

Under St. Marks, currently run by the Horse Trade Theater Group, has operated here as an experimental theater since the 1970s.
Posted by Grieve at 10:00 AM No comments:

[Updated] Under St. Marks won't be available for the Frigid Festival, which starts on Wednesday night 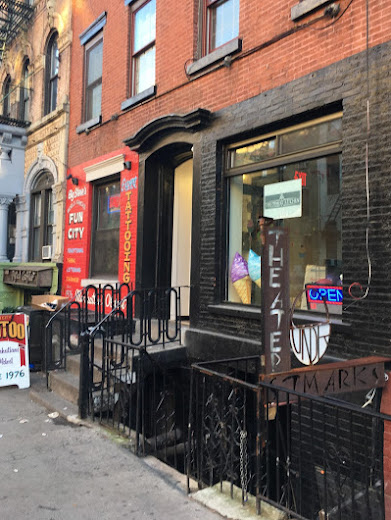 Updated 2/20: Shows scheduled for Under St. Marks will now be at the IATI Theater at 64 E. Fourth St.

The annual Frigid Festival gets underway on Wednesday at several East Village venues. Unfortunately, Erez Ziv, Frigid's artistic director, has learned that one of the main venues for Frigid, Under St. Marks, 94 St. Mark's Place between Avenue A and First Avenue, isn't available now.

Ziv and company are currently searching for new venues to keep the festival going as planned...

Meanwhile, there aren't any new work permits on file with the city for 94 St. Mark's Place that might shed light on the scope of work necessary in the basement space.
Posted by Grieve at 9:07 PM No comments:

'Feast' your eyes on this tomorrow (Monday!) night 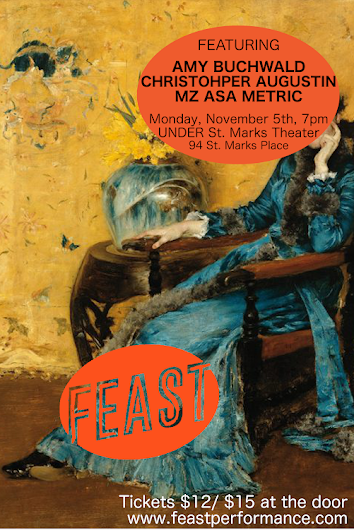 Producers Alex Randrup and Conrad Kluck curate and host the latest monthly show from FEAST: A Performance Series, tomorrow night at 7 at UNDER St. Marks Theatre, 94 St. Mark's Place between Avenue A and First Avenue.

Penny Pollak on the open mic and the big screen 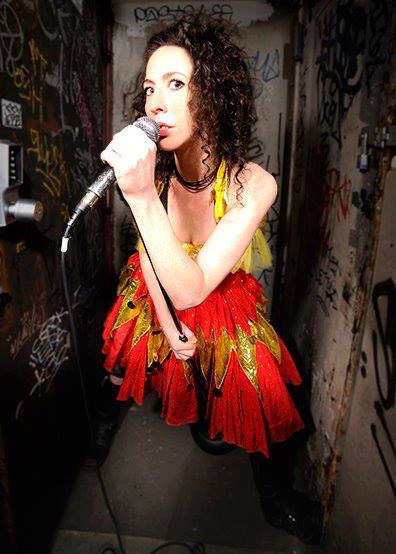 For the past six years on Tuesday nights, Penny Pollak has hosted Penny's Open Mic at Under St Mark's Theater.

This coming Tuesday she is hanging up the mic (the show will go on without her, though).

Pollack is heading into production on her feature film with director Tony ("American History X") Kaye. She stars in "ABIGAIL: A Comedy About Suicide," which explores the themes she used in her one-woman performance titled "No Traveler (A Comedy About Suicide)." (The play debuted in 2010 during the Horse Trade Theater Group's Frigid New York Festival.)

Here, Pollak, a writer, actor, fire-breather, shares some thoughts on her years hosting the open mic as well as prepping for her film work.

Was it a difficult decision to end Penny's Open Mic after six years?

As much as I will miss the mic, the timing couldn't be more perfect. The way everything has fallen into place with my film, I couldn't be happier to work full time on it and see it come to life.

Also knowing that an Open Mic on Tuesday nights at Under St. Mark's will still be going with the same spirit puts my heart at ease. My house band Dan Ricker and Mike Milazzo with Kaitlin O'Connor will be hosting a new open mic in the same slot called The Open Mic Downstairs.

What have you taken away from that time?

I’ve made the dearest and closest friends I could ever meet, seen countless amazing performances. I’ve gotten to watch artists I respect take risks and had the opportunity to experiment myself and grow as an artist.

How is "No Traveler" evolving for the screen? This is more than a performance film?

It's a feature film called "ABIGAIL: A Comedy about Suicide." It explores the themes used in my play "No Traveler" but is a completely different story. We are in talks with an incredible ensemble cast and I’m very excited to be playing the lead.

How did Tony Kaye get involved?

I met Tony at my open mic. As well as being brilliant director he is also a very talented singer/songwriter. At the time he was making "Detachment" with Adrien Brody where there is a scene involving suicide. He came to see my play and immediately saw the potential for film. We would meet every week for quite a few months where he directed my writing into a whole new direction. We’re producing it under his company Above The Sea Productions.

Will you be filming in the East Village and Lower East Side?

The story takes place in the East Village so most of the filming will be here.

How do you plan on capturing the neighborhood?

As honestly as possible. I’ve lived and worked here since I moved to NYC and the neighborhood has shaped my life in a very deep way.

What is the timeline for production?

I’m leaving for LA right away to help finish pre-production and we hope to start filming as soon as possible.
Posted by Grieve at 6:00 AM 1 comment: 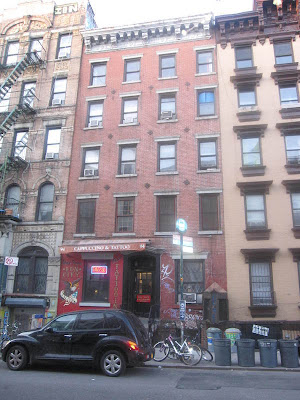 Finally some good news around here... Back in March, we first reported that 94 St. Mark's Place, home to Under St. Mark's and the Horse Trade Theater Group, was for sale, putting the future of the venue in doubt ... another crushing blow against the remaining East Village artistic community? ... From the inbox...

Horse Trade Theater Group signed a seven-year lease on UNDER St. Marks Theater, securing the space as an artistic playground for the numerous performance artists who have been calling the downtown theater home.

“We are so happy and relieved to have come to this agreement so that UNDER St Marks can continue to be used by the artistic community of New York for experimentation, collaboration, and avant guarde performance” said Horse Trade Theater Group’s Artistic Director, Heidi Grumelot. “We doubt that any other basement in this city enjoys as much continual creative activity as UNDER St. Marks. Ultimately we hope to safe guard USM so that we no longer need to focus on preserving the space for our artists, but can instead focus on producing and promoting the work of our artists.”

“We would like to thank the entire community for standing behind us over the past couple of months and showing their support both in spirit and in actual dollars” stated Managing Director, Erez Ziv. “The monies raised through our fundraising campaign this summer have helped us to provide for a modest signing bonus and to offset the small rent increase over the next few years. We have not given up on the dream of owning our own space and are currently in discussions with our landlord to figure out a way to make this a reality.”

UNDER St. Marks is a downtown performance venue with a rich history. An experimental theatre space since the 1960’s, this 45-seat basement theater is now home to a wide variety of performance artists. Horse Trade intends to launch a capitol campaign in order to purchase the theater when their new lease runs out. 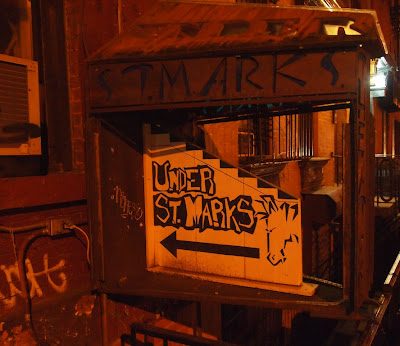 Previously on EV Grieve:
94 St. Mark's Place on the market, and what will it mean for Under St. Marks?

An update on the plan to save UNDER St. Marks

As we reported back in March, 94 St. Mark's Place is for sale... the building houses UNDER St. Marks, which is operated by Horse Trade Theater Group.

Here's an update on what has been happening... and what the plans are for UNDER St. Marks via the Horse Trade website:

Since we learned that our building was up for sale, we have had good meetings with our landlord, and he has promised to work with us to buy the space. There have been no other offers on the building.

We are developing plans to convert the building into artist housing, expand the seating capacity of the theater, and create a coffee shop/wine bar/lobby entrance to the theater. We are investigating multiple ways to make the space self-sustained and green, including creating a green rooftop, using the artist housing as a B&B when empty and working out the plans for the lobby space.

We have an architect, lawyer, and realtor who will donate their time to create the plans and package needed to go after larger funders. We have put together a fundraising committee and we are recruiting new boardmembers.

We have ongoing fundraising events planned in the space for the coming months. We have raised 20% of our funding goal with only 10 percent of our friends contributing. We are asking 1,000 of our friends to help us by giving $50 by July 4. Click on the link to our indiegogo page here and learn more about the project and about our well-loved and well-used theater space.

Find them on Facebook at Save UNDER St. Marks And for a list of upcoming shows, please go here.

Previously on EV Grieve:
94 St. Mark's Place on the market, and what will it mean for Under St. Marks?
Posted by Grieve at 6:58 AM 3 comments:

Following the news that a) 94 St. Mark's Place is for sale and b) the Horse Trade Theater Group, who operate UNDER St. Marks, are hoping to buy the building...

Group description:
As you may know, 94 St. Mark's Place is for sale. This building is the home of our beloved UNDER ST. MARK'S THEATER, run by the fine folks at Horse Trade Theater group. Horse Trade is launching a campaign to buy the building and keep the theater and we want to help! Consider this a place to brainstorm and organize!

Find them on Facebook at Save UNDER St. Marks

Previously on EV Grieve:
94 St. Mark's Place on the market, and what will it mean for Under St. Marks?
Posted by Grieve at 6:31 AM No comments: 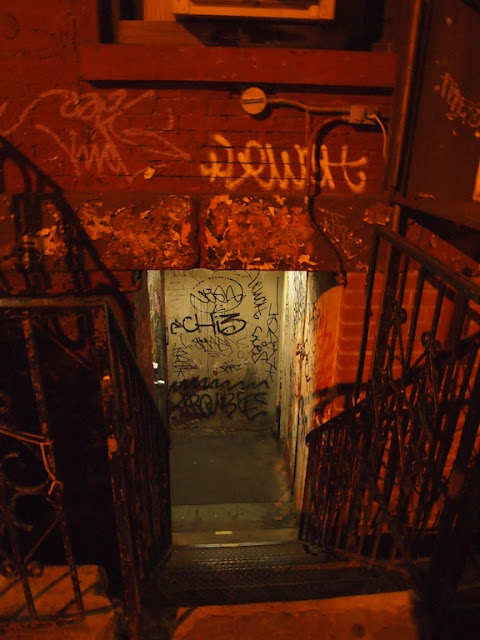 Following up on our news yesterday that 94 St. Mark's Place is now for sale... the building houses Under St. Marks, which is operated by Horse Trade Theater Group. Horse Trade just released this statement...

Despite the announcement that 94 St. Marks is now for sale, Horse Trade Theater Group has no plans to close UNDER St. Marks anytime soon, and all scheduled resident productions and rental contracts will be honored. Horse Trade also announces that they will be mounting a capital campaign in order to purchase the property themselves.

Previously on EV Grieve:
94 St. Mark's Place on the market, and what will it mean for Under St. Marks?
Posted by Grieve at 12:23 PM 2 comments: