A Blood Drive at the Clemente Center tomorrow 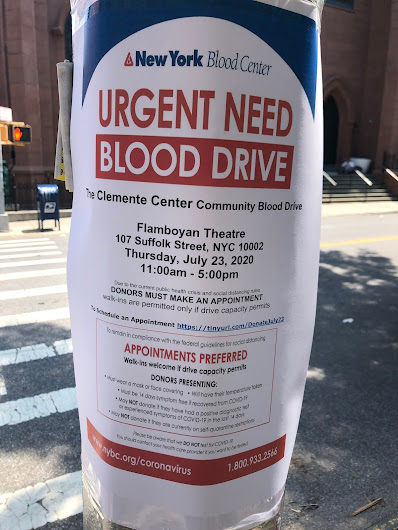 There's a blood drive tomorrow (Thursday!) from 11 a.m. to 5 p.m. at the Clemente Center on Suffolk and Rivington sponsored by the New York Blood Center.

The nonprofit has put out another urgent call for blood donations. You need to make an appointment by calling 1-800-933-2566. You can also do so by email via this site.
Posted by Grieve at 2:00 PM 2 comments: 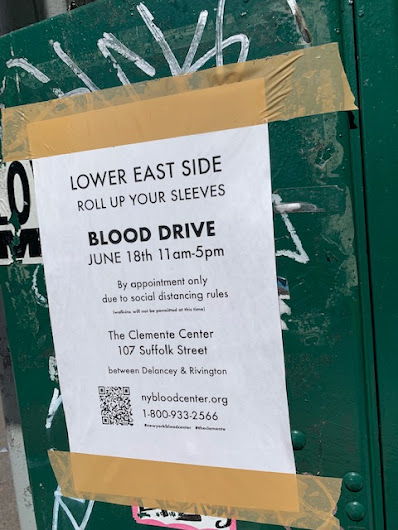 An EVG reader shared this flyer... one of many around for a blood drive tomorrow (Thursday!) from 11 a.m. to 5 p.m. at the Clemente Center on Suffolk and Rivington sponsored by the New York Blood Center. 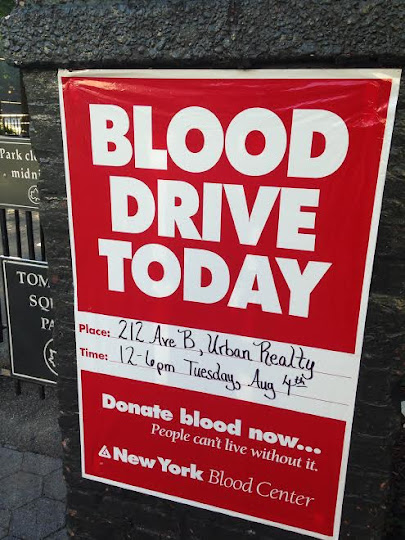 In case you didn't see these posters around Tompkins Square Park this past weekend … and are interested in donating blood … There's a blood drive tomorrow from noon to 6 p.m. at Urban Realty, 212 Avenue B near East 13th Street.

No word if the blood will suffice as your deposit and first and last month's rent.
Posted by Grieve at 4:21 AM No comments: 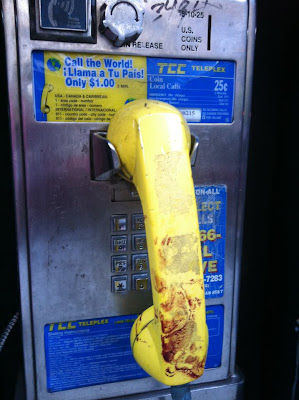 A payphone on the west side of Avenue C between East 10th Street and 11th Street. Blood or ketchup? You decide.

Headline and photo by Andrew Adam Newman on Ave C
Posted by Grieve at 6:31 AM No comments:

A reader notes that last night around 9:15, seven police officers, both uniformed and in plain clothes, chased down, handcuffed and searched a man in a baseball cap, T-shirt and shorts on the east end of the Fine Fare storage cages on East Fourth Street at Avenue C.

The NYPD cordoned off the area, placed the man on a stretcher and into an ambulance. An officer on the scene told the reader that the man had been chased from elsewhere and caught at that location. The reader also noticed that the man in custody was bleeding while standing against Fine Fare.

This morning, the reader saw that the man's dried blood was on the sidewalk ... along with a glove and gauze ... 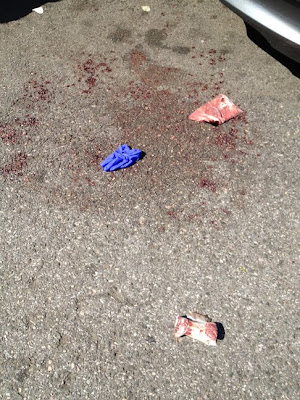 The reader said that neighbors had talked to the Fine Fare manager about the blood. The manager allegedly said it wasn't his problem. Later this morning, two officers arrived on the scene, picked up the glove and gauze, and then went inside Fine Fare. 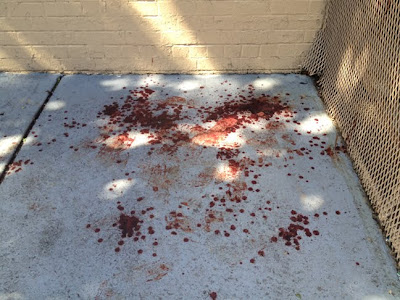 Any other readers have further information about what happened here? Please send them our way via the EV Grieve email

Updated 1:16:
Gothamist has more on the incident here. According to their tipster:

"I talked to the manager who said he wasn't going to do anything about it and threw me out of the store ... I called 911 and 2 officers came, picked up those gloves and gauze you see from the street and threw them in the corner garbage can, and nothing else."
Posted by Grieve at 11:51 AM 7 comments:

A note for the person who bled all over the stairs 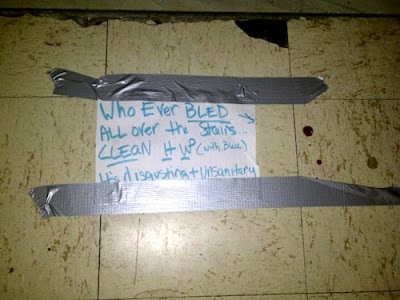 EV Grieve reader Marisa found this instant classic Urban Etiquette Sign at the top of the stairs of a Second Avenue apartment building... As you can see, someone is bleeding all over the stairs and not remembering to clean it up (with bleach).

Is this too much to ask?

[For more photos and what not, visit her Tumblr here]
Posted by Grieve at 6:47 AM 3 comments:

Happy endings: No more blood on the bench

On Wednesday, we wrote about the new bench adjacent to the MTA ticket machines on Second Avenue just south of 14th Street.... the one with the dried blood on it... EV Grieve reader Peter figured it had been there for five days. MTA officials standing there told him that it wasn't there problem. 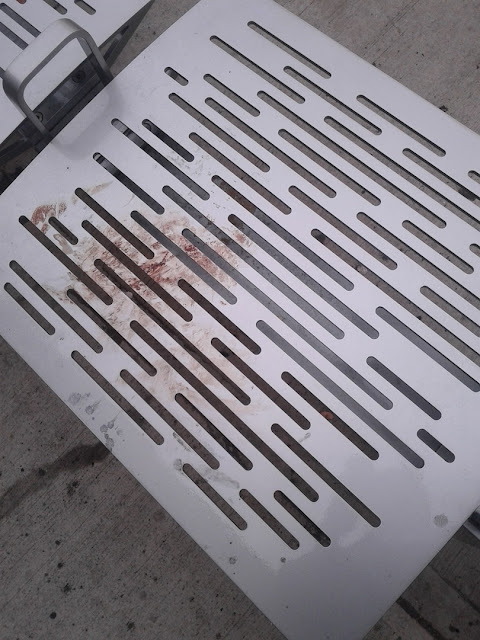 Anyway! As of last evening, the blood is gone. 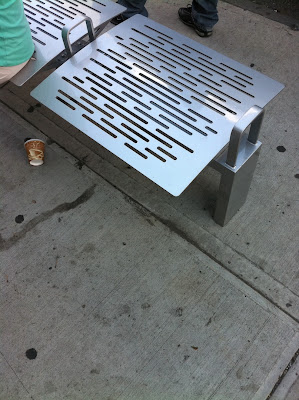 Now if someone would only pick up that coffee cup!
Posted by Grieve at 6:30 AM 1 comment:

About that new bench with blood on it

EV Grieve reader Peter sends along a note about the new bench adjacent to the MTA ticket machines on Second Avenue just south of 14th Street.

"That bench is currently covered in blood. 311 is no help. MTA reps (about 6 of them) just shrugged it off twice in two days. Don't know who to call for this one. Any ideas?"

And here are two photos... 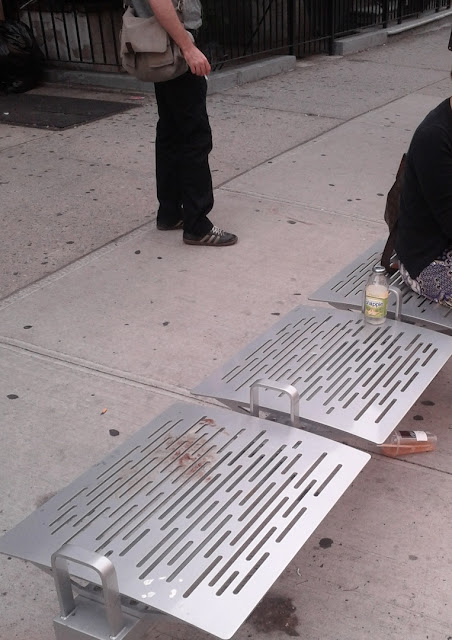 Peter says that the blood has been there for five days. He has talked with the MTA officials who congregate there to issue tickets to fare beaters. They say that it's not their bench, so it's not their problem. It's a city bench, apparently.

Anyway, we took a look for ourselves... 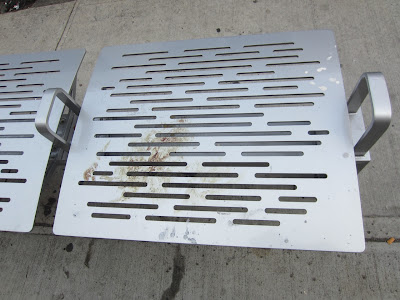 Blood? Or maybe a melted dessert from Milk Bar around the corner?
Posted by Grieve at 6:29 AM 8 comments: