Speaking of St. Mark's Place and First Avenue... I posted this four years ago ... dug it out again... per the YouTube description: "a time lapse of that corner in NYC back in '93 or so from a 3rd floor window..." 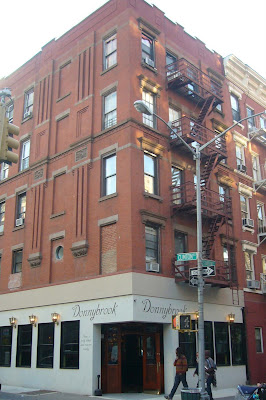 Stopped by Donnybrook the other day for a drink. This is the new upscale Irish pubby place that opened at the corner of Clinton and Stanton on Oct. 24. 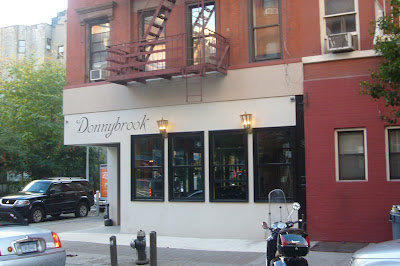 Having lived across the street for nearly 10 years, we were curious about what became of the space. (We had moved up the way before the former occupant, the Lotus Lounge, closed.) First, the bar. Well, it looks as if the owners (same as Lucky Jack's) spent a fortune renovating the space. Everything is spiffy and buffed. They'll spend a fortune on Pledge. The folks working were friendly. The bartender said they'd be serving "hearty Irish fare" in the next two weeks. There were two TVs on (mute) with some sort of sports; one TV was tuned to a rugby match that a group of people from the UK were enjoying. The Dave Matthews Band was playing on the house stereo. (And not just any old Dave Matthews -- this was a live recording with an extra side of jam!) We had two draft beers (imperial pints) and two glasses of wine. Our check was $32. It was all perfectly pleasant. 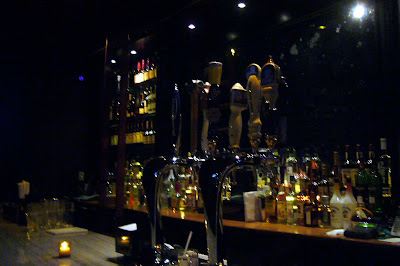 But would we ever go back? Well, it's just not really our thing. We like a little more grit and grime. And history. A friend, who has lived in the neighborhood for years, popped by for a drink and dryly remarked that it's "a little slice of Murray Hill right in the LES." (He must not get out much in the neighborhood these days.)

While at Donnybrook, we started reminiscing about the cluttered Christian Ministries thrift shop that was housed here before the Lotus. We bought some kind of dresser that weighed like 300 pounds. The proprietor, who looked like Jeremiah Johnson, was kind enough to help us lug it up five steep flights of stairs. He refused a tip. But! He wasn't in a hurry to leave. "May I ask you a question?" Uh-oh. "Have you accepted Jesus Christ as your lord and savior?" Somehow we got him out the door with only a pamphlet for the trouble. We also thought about the bodega where wd~50 is now on Clinton Street; the bodega with the cock-fighting ring in the back. Anyway, we did a little too much reminiscing at the Donnybrook. Which made me think that this bar is out place. Or rather, we're just out of place.
Posted by Grieve at 7:00 AM 7 comments:

For 30 years, Adam Petrella ran the funky newstand with the directions at Bowery and Canal called Petrella's Point. (You might remember his portraits of Bruce Lee and Marilyn Monroe that adorned his stand.)

As the Times reported, on May 16, 1997, "Giuliani signed into law new rules governing sidewalk newsstands, increasing the annual fee charged the city's 330 vendors from $538 to as much as $5,000, depending on the location. The law also provides for 100 more stands to be put out for competitive bids. Current renters will have five years before the city decides whether to continue renting the stands or to seek bids. The law is part of the initiative to replace current street furniture (newsstands and bus shelters) with new streamlined versions that will be built by the company that wins a 20-year city contract. The new items and 30 public toilets will be financed by selling advertising space on them, generating hundreds of millions for whoever gets the contract.

Mr. Petrella wonders when he'll become a victim of design and progress."

The newstand was removed in 2004 to make room for a bank. Petrella died in 2006 at the age of 85. According to his obiturary in The Villager:

"His is the story of a proud New Yorker who persevered and documented three decades of change on the Bowery. He is a true and significant source of inspiration for our own small museum,” said Dave Herman, president of the City Reliquary Museum in Williamsburg, Brooklyn."

Speaking of the City Reliquary Museum, Herman has some of Petrella's old newstand on display, along with the original 2nd Avenue Deli sign construction workers tossed when the restaurant shuttered in 2006. The Museum is holding a summer benefit tonight.
Posted by Grieve at 7:15 AM 1 comment:

"The neighborhood was desolate, so underpopulated that landlords would give you a month's free rent just for signing a lease" 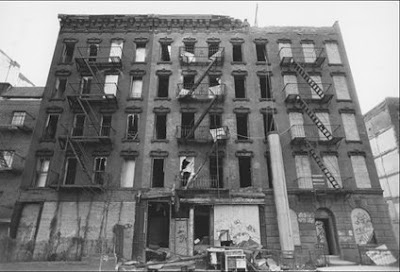 My obsession with the East Village in the 1970s and early 1980s continues.

In November 2003, new editions of the bible, Luc Sante's "Low Life: Lures and Snares of Old New York" (Farrar, Straus and Giroux, 1991), included an afterword, which was also published in The New York Review of Books on Nov. 6, 2003. (I have an old copy of the book, and was unaware of the essay. By the way, the essay also appears in the booklet that accompanies the Stranger Than Paradise Criterion Collection.)

Here are a few of the many compelling passages from My Lost City:

I drifted down from the Upper West Side to the Lower East Side in 1978. Most of my friends made the transition around the same time. You could have an apartment all to yourself for less than $150 a month. In addition, the place was happening. It was happening, that is, in two or at most three dingy bars that doubled as clubs, a bookstore or record store or two, and a bunch of individual apartments and individual imaginations. All of us were in that stage of youth when your star may not yet have risen, but your moment is the only one on the clock. We had the temerity to laugh at the hippies, shamefully backdated by half a decade. In our arrogance we were barely conscious of the much deeper past that lay all around. We didn't ask ourselves why the name carved above the door of the public library on Second Avenue was in German, or why busts of nineteenth-century composers could be seen on a second-story lintel on Fourth Street. Our neighborhood was so chockablock with ruins we didn't question the existence of vast bulks of shuttered theaters, or wonder when they had been new. Our apartments were furnished exclusively through scavenging, but we didn't find it notable that nearly all our living rooms featured sewing-machine tables with cast-iron bases.

The neighborhood was desolate, so underpopulated that landlords would give you a month's free rent just for signing a lease, many buildings being less than half-full, but it was far from tranquil. We might feel smug about being robbed on the street, since none of us had any money, and we looked it, and junkies—as distinct from the crackheads of a decade later—would generally not stab you for chump change. Nevertheless, if you did not have the wherewithal to install gates on your windows you would be burglarized repeatedly, and where would you be without your stereo? In the blocks east of Avenue A the situation was dramatically worse. In 1978 I got used to seeing large fires in that direction every night, usually set by arsonists hired by landlords of empty buildings who found it an easy choice to make, between paying property taxes and collecting insurance. By 1980 Avenue C was a lunar landscape of vacant blocks and hollow tenement shells. Over there, commerce—in food or clothing, say—was often conducted out of car trunks, but the most thriving industry was junk, and it alone made use of marginally viable specimens of the building stock. The charred stairwells, the gaping floorboards, the lack of lighting, the entryways consisting of holes torn in ground-floor walls—all served the psychological imperatives of the heroin trade. . . .

Now, more than a decade after I finally finished my book Low Life, the city has changed in ways I could not have pictured. The tenements are mostly still standing, but I could not afford to live in any of my former apartments, including the ones I found desperately shabby when I was much more inured to shabbiness.
[For more amazing photos by Marlis Momber like the one above, please visit her Web site.]

The Library of Congress has a photostream at Flickr that includes archival photos of Manhattan. Given the diabolical heat of late, these seemed approriate to post; to see how those before us coped with the heat. 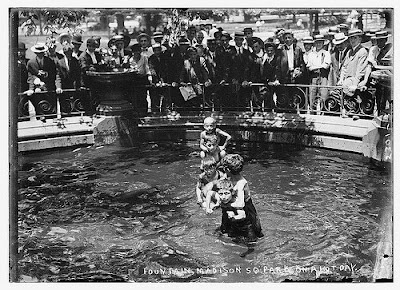 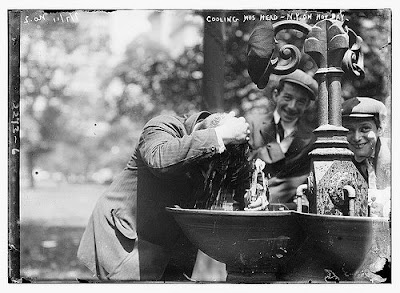 No mention where this was taken. Just a note about a man cooling his head on a hot day. 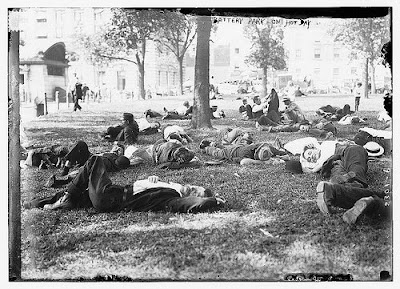 Caption reads, "Asleep in Battery Park on hot day." (Maybe they're just waiting for the new Apple iPhonograph to be unveiled.) 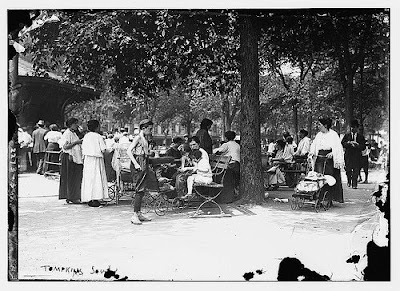 Meanwhile, I wouldn't mind this scene in Union Square for a few minutes right about now... 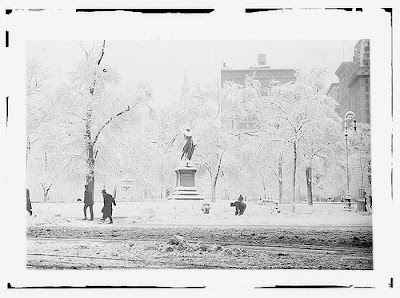 Meanwhile, a few doors down...12 years earlier...an old favorite that never gets old.

Posted by Grieve at 6:10 PM No comments: 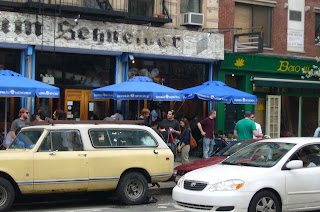 Paying attention to the little things 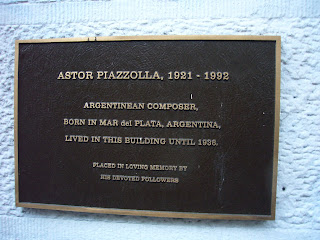 This plaque is on a building on East Ninth Street between Avenue A and First Avenue. I'm always happy that such tributes survive through the years. Can easily see some new builinding owner or creepy super be like, "Who in the &*&^%$ is Astor Piazzolla...?" and take it down.

By the way, I wasn't familiar with him either until I first saw this plaque some years back.