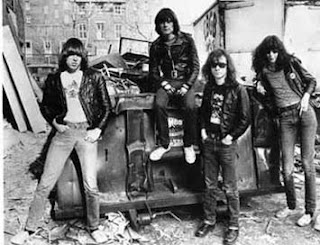 That's Cheetah Chrome in today's New York Post discussing the new i-banker playground off the Bowery. "Extra Place," as it's being called, is in the former piss-filled alley behind CBGB. (See the Ramones photo above.) As the Post notes, that spot is "getting dragged into the 21st century with a makeover that would make Martha Stewart proud." Yes, because she could afford the kinds of things that are going into "Extra Place." (How not just call it "Extra Expensive"?)
Posted by Grieve at 10:36 AM

Email ThisBlogThis!Share to TwitterShare to FacebookShare to Pinterest
Labels: being boring talking about how much better things were then, CBGB, ruining the neighborhood one glitzy shop after another