On the Bowery: CBGB and its impact on the visual arts and downtown nightlife 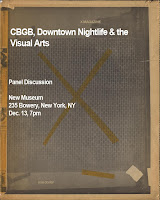 Here's a blurb about it:

A panel discussion about the impact of CBGB and the downtown club scene on the visual arts from 1975-1985. The participants are John Holmstrom, Pat Place, Marcia Resnick and Arturo Vega.

Marc H. Miller is serving as the moderator. We asked him to recall his first visit to CBGB, circa 1976:

"When I first walked into CBGB, I was surprised to see so many visual artists that I knew from Soho and Tribeca. Some were in bands, others had friends in bands and helped out by making posters and stuff, some took photographs, most just hung out. The funny thing was that nobody wanted to be called an artist. The art world seemed phony and pretentious at the time. The favorite word was “boring.” People were looking for action, for something real, for something that actually had an audience. The music scene provided an opening."

And because I've only posted this video of one of my favorite songs 12-13 times on this site ... here we have the Bush Tetras, with Pat Place, on the Bowery...

You can see me, frequent EVGrieve poster, in this Bush Tetras Video that I help film with Ed Steinberg (Director).
The interior scenes were filmed in the Peppermint Lounge on 45th bet 6th and 7th aves.
My appearance is at 3:41 and I'm wearing a John Willie t-shirt.