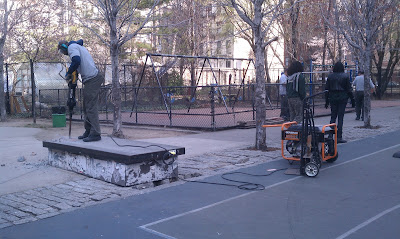 EVG reader Steve Carter notes this morning that workers are on the scene at Open Road Park, the playground popular with skateboarders adjacent to the East Side Community High School on East 12th Street between Avenue A and First Avenue...

It appears that the workers are dismantling/pulverizing the benches and other seating areas around the park.

One young man with a skateboard said, "I got to go inside before I kill somebody."

There have been off-and-on again issues here the past few years... In June 2011, officials from East Side temporarily closed the park. During a public meeting, officials cited increasing incidents of discarding trash and debris, smoking cigarettes, selling marijuana ... and trouble with people not respecting set school or other programmed activities.

Why the Open Road Park is closed
Posted by Grieve at 10:07 AM

Before today there were two picnic tables out there too. Gone.

Wanna bet the lot has been sold for development? It's a big space, you could get lots of students and/or woo-woo-ers in there.