Reader mailbag: How many wall renovations does one school need? 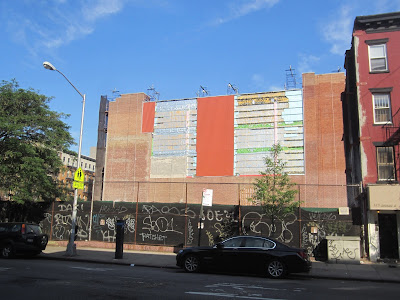 From the EVG mailbag…

Can anyone explain what these workers have been doing outside East Side Community School on East 12th Street for the past month or more, besides spending millions of tax dollars? This is the second time in five years they've reconstructed this wall. Cheaper to tear down the existing structure and replace it with a state of the art school, no?

The school had to be evacuated on September 2012 when the wall was found to be separating from the rest of the structure. The emergency renovations displaced the students for four months.
Posted by Grieve at 4:29 AM

The idea that it would be cheaper to replace the whole school is naive. Just getting plans for a school done and agreed upon would cost more than the cost of wall. Besides, when was the last time the city even built a school? Sadly, this is how government works now. Without vision or money, they can only fix things when they become emergencies. That's the only way things get funded now. We are lucky that we have these beautiful schools from a different era when public works meant making stuff and not fixing it.

My guess is they made a temporary fix before and are now going back in to make a more substantial permanent fix. They may have also had to go in now because of the impending construction on that site. I wonder how much space there will be between the new building and the school if any at all.

Didn't the NY Post do an expose on this building a few years ago. They did years and year of renovations with no end in sight. Right after the NY Post article , the scaffolding that had been in place for years came down and the renovations were 'finished"

Yes, someone can explain it -- the principal of the school. How hard is that to figure out?

I live on this street and find it quite strange the amount of public money spent on this property in recent years. Millions was spent on scaffolding about 3 or 4 years ago for "brick pinning" and now they are doing "brick pinning" on the entire building again. No accountability for past work performed if it was unacceptable. They playground next door used to be a bus depot which buried tons of toxic equipment and oil based products which are still venting. For the past few months, I watched the contractor remove the environmental protectant cover, cut off the venting pipes and installed a soccer field. I feel sorry for the kids allowed to play on a toxic waste site.

2:16. Maybe time to tip some reporters... It seems like another boondoggle.