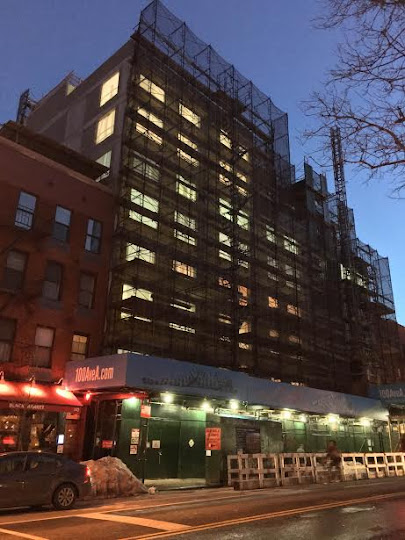 Rendering Reveal Week continues... as a new website for Ben Shaoul's condoplex at 100 Avenue A between East Sixth Street and East Seventh Street has been unleashed (h/t Curbed!).

As previously reported, the residences at the 6-story 8-story building start at $1.3 million. 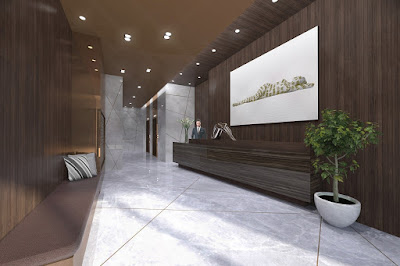 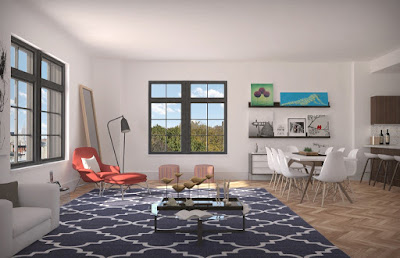 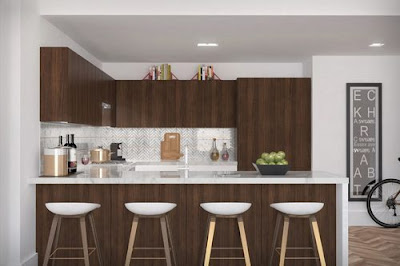 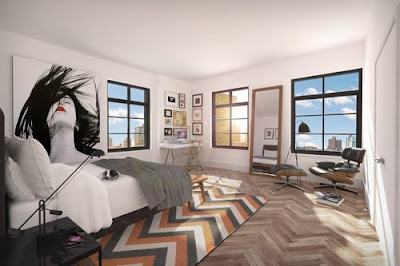 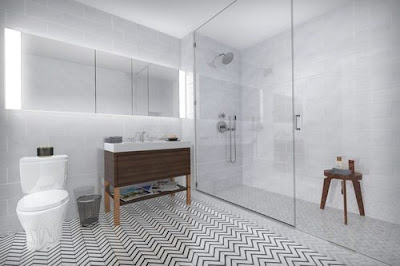 100 Avenue A has 32 units, ranging from one to three Bedroom residences with four Penthouse units. Whichever you choose, your home will have stunning floor plans, light-filled layouts, and expansive windows for taking in the view outside. When your friends and family come over, they might even ask to move in.

• Miele Refrigerator, Oven and Cooktop, Dishwasher, Washer/Dryer in all units

And what else can new residents expect in the building? Back to the website!

100 Avenue A has a private landscaped roof deck.

Things that it’s good for:

Things that it’s not good for:

The building also has another roof garden on the second floor, so you can experience all these benefits twice over

And if you are still breathing, the newly launched site also offers insights into its naked-person marketing motif ...

When we began building 100 Avenue A, we wanted to create a place for people who strive to make their mark on the city. Working with the gifted architect Ramy Issac of Issac and Stern, we believe that we’ve realized that vision. The building stands proudly in the center of the East Village, a neighborhood with a storied past of iconoclasts.

Today, a new generation of residents are reanimating and updating the area’s transgressive traditions with their creativity and vitality. 100 Avenue A is the embodiment of the East Village’s ever-evolving identity. It’s for the brave and the bold: people who want the finest that New York has to offer, and who aren’t afraid to break conventions. 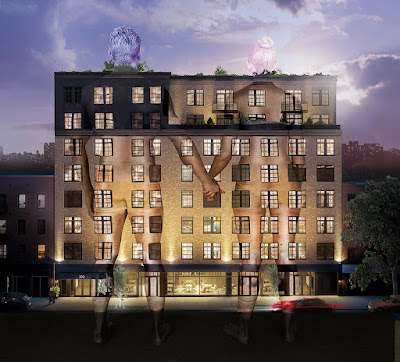 Developer Ben Shaoul bought the former theater-turned market at 100 Avenue A in the spring of 2013 for $15.5 million.

Someone threw black paint bombs at the naked women condo ad along 100 Avenue A
Posted by Grieve at 4:30 AM

storied past of iconoclasts? It's a friggin neighborhood of losers: jaded poets, petty criminals,sketchy tax dodgers, social media snarks, burnt-out anarchists, Puerto Ricans desperately barely holding on amid gentrification, overwrought students who haven't a cue what's going on, and a few landed Ukrainians, who've attained the immigrant dream of owning property, but whose children have all moved to Ramapo, NJ.

Did I miss any one demographic?

Where do rich people put the TV ? or dressers/furniture ?
Horrid floor.

"we wanted to create a place for people who strive to make their mark on the city" = destroy most things with a past and eradicate landmarked buildings.

"It’s for the brave and the bold: people who want the finest that New York has to offer, and who aren’t afraid to break conventions." = YUNYs with cash to spend from a trust fund and only want to follow the accepted rules from their pack of other privilege soon to be hedge fund bankers.

The projected image looks like something left over from the 3rd Reich.

Prediction for the ground-floor retail: Bank of America, Duane Reed.

There is no way Albert Speer, chief architect of the Hitler regime, would have even build something that hideous. He based his creations on ancient Rome, not the container you throw in the trash when you buy a new pair of shoes.

"Today, a new generation of residents are reanimating and updating the area’s transgressive traditions with their creativity and vitality..." - so, what, does that mean dressing like the Easter Bunny instead of a "sexy elf" (yawn) during Santacon?

Twaddle. It's all just twaddle.

It's hilarious that those who claim that the new additions are ruining the neighborhood already have a ridiculously low opinion of it.

I gotta move. Because now when I look around the East Village, it looks so different. It is a different age. I look around and I am reminded of so many places that no longer exist. I am not that old, yet this place is making me feel like I belong to a past era.

Here's the one thing I gotta ask: Are rich people so void of any personality to the degree that they need to buy into a "lifestyle"? A lot of these newcomers don't care one bit about the city and its storied past (or dream of contributing much to its future besides, of course, making more money). I hope they enjoy their new CVS, Chase Bank, and/or Duane Reade combo———so exclusive. I have a roof on my building, too. It's not such a big deal...this write up sounds more like a dating profile. My fridge is better than your fridge....give me a break.

Things that my private landscaped rooftop deck will be good for:

Picnic-ing with my tasteless takeout lugged home all the way from Whole Foods, which is SO inconveniently located--can't they open one in this building?

Looking up at the night sky thinking, hm, didn't they have stars in Ohio?

Thinking how hard it is to add any personality to my boring cookie-cutter apartment a few floors below with a view of Ray's and the strange, sort of scary people I see coming in and going out of there;

Thinking about whether those scary people are meanies who will hurt me when I exit my safe, happy place here at Ave. A

Oh, hang on, someone else up here is saying how the scary people are musicians who live in that tenementy-like building across the street. He says they even have a bathtub in their kitchen--weird! Sure, I'll have a Rogue Dead Guy Ale. Thanks!

I feel sick. Too many Dead Guy Ales. Gonna hurl over the side. Look out scary-looking musician-people below!

Odds are in favor of AT LEAST a third of these condos will never have anyone living there. Don't believe me? Here's your guide:

And there are HUNDREDS of businesses online assisting those with BIG bucks pursue the dream. Here's just one:

Add to this the fact that the properties are selling like hotcakes based on drawings and HORRIBLY photo-shopped renderings like these.

INSANITY is NOT strong enough a term.

Why would anybody pay millions to live in that neighborhood near a Con Ed substation!? Oh, wait, right, it's an investment in an AirBnB hotel.

To sam _the_ man,
A fitness club has leased the ground floor. Sorry, no Bank of America, no Duane Reade. I'd rather see a food store.

People enjoy living in a cement tank with windows!

Blink Fitness signed a lease for the retail space...

Realtors think $1-2 million is a small budget these days, so if we adjust for inflation, what was the equivalent in 1975... Do the math?

Looking at the Dept of Finance statement, I see he built above the zoning allowance (allowed: 32,400sq', he built 37,174sq'). Did he take the affordable housing bonus to get the extra square footage? Is there any indication that he's offering any affordable units? Or did he buy "air rights" from one of the adjacent buildings? If he bought air rights instead of creating affordable housing, then it once again shows what a scam Bloomberg's Inclusionary Housing was, and it's also an argument in favor of de Blasio's Mandatory Inclusionary Housing proposal that's going to the City Council soon.

How many fitness clubs do we need in this neighborhood? I mean, seriously; are we that out of shape? (I picture all these people calling an Uber to take them to the gym.)

Also, didn't it used to be that luxury buildings would have fitness rooms available to the residents? Is this place going to have a pool? So many questions.

@9:36: as I commented elsewhere, the affordable housing bonus footage is transferable, so you can sell it and buy it. If that is what happened there will be a piece of paper somewhere with notarized signatures showing the transfer.

The sad truth is that a local affordable group sold their right to build additional stories to Shaoul for cash, which they claim they invested to maintain the building as affordable. This apparently happens quite often. So Shaoul get's two additional stories and the community get's no new affordable housing. It is a bit of a scam and appears to happen more often then we would imagine.

@9:20 -- Yes the bonus is transferable, but my point was that the bonus footage is *in* the building, not transferred elsewhere. A local affordable non profit could only have sold the bonus voucher if they'd built affordable housing themselves and the market rate bonus wouldn't equal the additional footage in the building. IOW, if there are no affordable units, he's in violation of the zoning and the law.

@1:32 PM: He does not have to have any affordable units in his building if he bought someone else's bonus footage.

3:41 -- If that's what he did, then somewhere in the district someone built or renovated the affordable housing, which is exactly the public purpose that the zoning intends. But I don't see that there's anything in the R7A zoning that prevents a developer from buying developmental rights from an adjacent lot, in which case no affordable housing would have been involved.

@ 8:00am -- Thanks. I see that 250-4 are three Old Law tenements (built prior to 1901). A local affordable housing renovator has been active there, according to the DoF. The affordable housing transfer was for already existing affordable units. The law allows this, but people should understand that no *new* affordable units were created by or through the Shaoul building. This is not his fault -- it's the law, and people should know just what a lame law it is. On the good side, the renovated apartments in 250-4 will remain rent stabilized "premanently." Whether that means "affordable" depends.