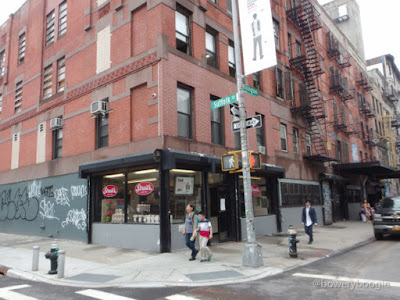 We've been talking about "Streit’s: Matzo and the American Dream" this past week.

The documentary by East Village-based filmmaker Michael Levine started its week-long run Wednesday at the Film Forum. (There's also a Streit's-related exhibit happening at Art on A Gallery, 24 Avenue A between East Second Street and East Third Street.)

The last family-owned matzo bakery in America closed its four-building factory on Rivington Street last year after 90 years in that location. As you likely know, the developers who bought the property have condos planned for the site.

Today, The New York Times published the first rendering of the new residential complex (the article was online on Thursday, which is why you may have seen this already elsewhere) ... 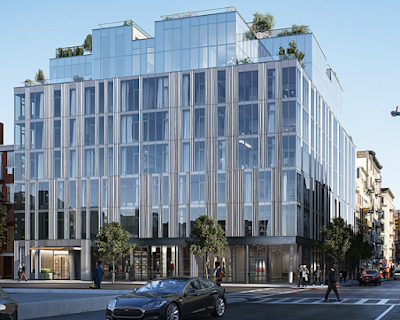 [Volley Studios via the Times]

Per the Times, 150 Rivington will be a 7-story glass condo "that will house 45 one- and two-bedroom apartments. Sales begin in May, with one-bedrooms starting at around $975,000."

Developers said that they plan to decorate the lobby with memorabilia from the original building.

BoweryBoogie also has part of an interview with Streit's co-owner Aron Yagoda, who tells of Mayor de Blasio snubbing his offer of a tour of the factory.

The piece in the Times focused on small businesses on the Lower East Side that are disappearing... and how Katz's was able to continue moving into the future by selling their air rights for $17 million... so that developer Ben Shaoul could then tear down the rest of the block
for an 11-(or 12!) story condoplex with an Equinox Fitness in the retail space on East Houston between Ludlow and Orchard.

Ray's Pizza, Bereket and Lobster Joint, among others — closed or moved in the process.

"I’m sorry they went out of business, but it’s part of evolution," Shaoul told the Times. "You call it gentrification, I call it 'cleaning it up.'"
Posted by Grieve at 9:40 AM

You call it cleaning up, I call it douchification.

Someone is cleaning up all right.

In a world of ugly new buildings, that one is the sterile glass cherry on the top of the pile. Holy crap is that a hideous eyesore - almost, but not quite, as disgusting as Ben Shit-tool, whom I daily pray something awful will happen to.

Zero respect for the history of the neighborhood visually or other... what a mess. Greed at it's finest.

LOVE it when these asshats open their mouths and PROVE that their money-drenched brains have NOTHING else in them but puss, brought on by the constant sucking of Ann Rand's discharge preserves.

Funny, Trump said the same thing of the locals when he built his golf course of the coast of Scotland.

I pray for a glass shortage so we don't have to look at anymore of these unimaginative gerbil nests.

Be positive. This is a nice ting. Progress. Embrace change.

What period of architecture shall we call this?

I agree with the last commenter. Embrace change. Be positive and hope for the best. Otherwise, you will be left behind.

Actually 12:53 AM, I was being sarcastic, seems that those are the justifications for all this cultural and historical destruction in the name of 'revitalizing' neighborhoods so that snobby people with too much money and too few manners can move-in and have 'nice things' pushing out the locals and natives for 'progress' and 'change'. I suppose you're the one being left behind with your rationale.

I can absolutely accept the Streits family doing what they had to do to move forward as a viable business, and cashing in the winning lottery ticket in the form of their real estate. But why do the developers/architects seem to need to go out of their way to flaunt the destruction of the past? It IS possible to build something handsome and respectful of the neighborhood and its history. Even the creeps at Icon pulled it off on 2nd avenue & 9th street.

This is directed to 8: 52 AM. When I commented at 12:53, I was merely parroting the last commenter before me. I don't know how or why you took it as a sign I was attacking or taking apart your former comment, even when I have no idea who you are, or what you wrote. Stop being a presumptuous bully and claim I am "the one left behind with your rationale." Be an adult, understand we all have opinions to express on this forum, and grow up. Have a nice day.