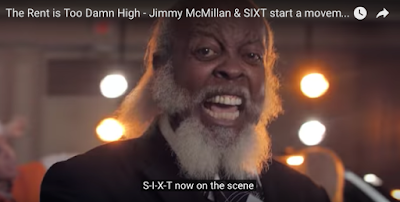 Last time that we heard from East Village resident Jimmy McMillan, he was announcing his retirement from politics, specifically the Rent Is Too Damn High Party, under which he ran for mayor, governor and, for a moment, president.

Now, as Adweek reports, McMillan has sold his trademark to Sixt, a German car-rental giant for its first ad campaign in the United States.

Per Adweek: "It seems the two have the same budget-conscious message, and at least one of them is in on the joke."

Here's the ad, which includes roles for journalist Cenk Uygur of the Young Turks and Josh "The Fat Jew" Ostrovsky.

And I'm not sure about what came of the ongoing eviction battle over his rent-stabilized apartment of nearly 40 years on St. Mark's Place. I haven't seen him on that block since the summer. Perhaps he has been busy filming commercials.
Posted by Grieve at 2:30 PM

Oh look everyone, the as shole who complained about how the rent is too damn high yet had two rent-controlled/stabilized apartments where he barely lived in the one on St.Mark's Place ('glad he lost that place as he should.)

He's pro-Trump so fu ck him and Cenk is an anti-Clinton won't get over that Sanders lost #NeverHillary (pro-Trump yeah that's right cuz Clinton is the only one to vote for) so fu ck him.

The Fat Jew? Nice anti-Semitism, moron, and no, it's not cool to call yourself an ethnic slur against your people, idiot.

This is meshuggah -- so calling a Jew a Jew is an ethnic slur, or is it the coupling of Jew with an adjective that makes it an ethnic slur? So if you're a Jew and you're fat, if someone calls you a fat Jew that automatically means they want to kill you 6 million times-Trump-is-Hitler? What if I said that Scarlet Johanson is one sexy motherfuckin' Jewess? Or is it only anti-Semitic if it can be construed to be derogatory? Or is calling Scarlet Johanson a sexy motherfuckin' Jewess derogatory because I'm singling her out for her appearance and not, say, her finer intellectual qualities? So I guess, by extension, "black and beautiful" is out too just for the record. Stay awesome America.

Seriously, if you can divine the meaning in the above you'd be well on your way to making the world a better place. #NotHoldingMyBreath

"no, it's not cool to call yourself an ethnic slur against your people"

You are really going to hate rap/hip hop.

However, McMillan is a putz. Always was, remains to be so.

It's great. Good for Jimmy. He's a great performer.

The guy named himself "The Fat Jew", have a sense of humor.

4:46 PM: If a Jew wants to call himself a Fat Jew, so be it. If you're not Jewish and you call me a fat jew, it shows your ignorance. I think we are too quick to call people racist, or anti-Semitic, or whatnot, as if that's the beginning and end of the discussion...

For those bashing Jimmy, ask these questions of yourself:
- Are you a decorated veteran who fought for their country in a very unpopular war, when others refused?
- Did you attempt to start a movement to level the playing field for hard working folks who spend too much of their income to have a roof over their head?
- Are you living on a fixed income?

If not then why do you begrudge Jimmy for helping to promote a budget rental car company and make a few dollars.

Give the guy a break and laugh a little.

I will miss seeing Jimmy on the debate stage, I loved seeing him run for Mayor and in fact have cast my vote for him.

Good for you Jimmy.

The Fat Jew is joke theif and is shunned by the comedy scene. He literally just steals other comics jokes as his own. And Jimmy to told me the reason the rent is too high is because of the Jews then went on a tirade about Jews so i said Drop Dead in Yiddish and walked away. I dont find him funny anymore and yes he loves Trump.

Thanks for turning this unfair income disparity crisis into a mockery. Cenk really fucked up too with this.