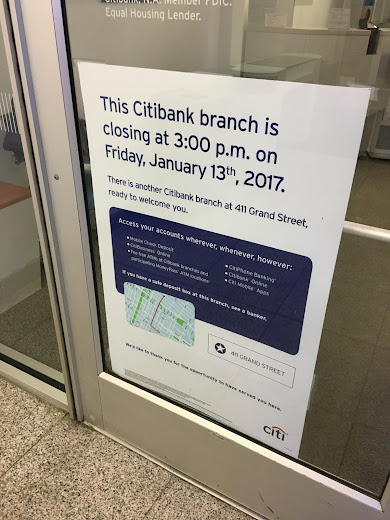 Back on Oct. 12, we shared the news that the Citibank branch at 50 Avenue A between Third Street and Fourth Street was closing in January.

The Citibank signage directs patrons to use the branch on Grand Street in Seward Park moving forward.

I asked a Citibank customer service rep here back in December about the closure. He said he didn't know anything — he was filling in from another branch — other that that the bank decided not to renew the lease upon the completion of its terms.

While we were talking, a woman who had been patiently waiting in a short line asked the teller if they had any 2017 calendars. The teller apologized and said that they didn't have any calendars. The customer said that she would return the next day to see if any calendars may have arrived. Meanwhile, a man — a regular on Avenue A and in Tompkins Square Park — sat sleeping in one of the chairs in the waiting area.

Previously on EV Grieve:
The Citibank branch on Avenue A is closing
Posted by Grieve at 10:00 AM

Oh hellz no - LESFCU are snakes in the grass, serious evil-doers.

Switch to Apple Bank, not a national corporate octopus, but rather a local, friendly establishment.

I just moved my money to the Sealy Bank for Savings and Slumber. It's no fee!