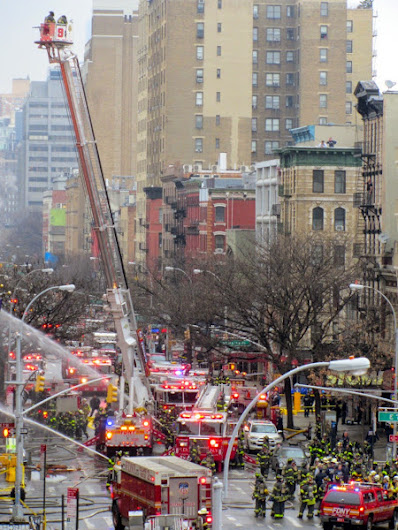 They illegally tampered with the gas line at No. 121, where the restaurant Sushi Park was the retail tenant, then failed to warn those in the building before the blast, according to the Manhattan District Attorney's office. The defense is attempting to shift the blame away from the three, putting the responsibility on Con Edison and others.

The trial is expected to last three months.

An EVG reader, who went to part of the trial last week, shared the courtroom information:

And unlike federal court, people can bring in smartphones, computers and books into the courtroom.

Here are a few headlines from the trial last week:

Thanks for keeping us up to date on this trial. I really hope that the greedy property owner, the contractor and plumber who are responsible for this disaster all get convicted and spend many years in prison.

They're trying to create doubt that it was their fault. ConEd is an easy target. I hope our general distrust in corporate America won't play out in their favor.