Workers from the Sanitation Department on Saturday reportedly removed the encampment beneath the sidewalk bridge on the northwest corner of Second Avenue and Seventh Street.

The action came on the same day that the Post criticized Mayor de Blasio for his non-action on such encampments — despite his calls to remove them around the city.

The Post spoke with people who were upset by the makeshift living quarters that had increased in size here between Seventh Street and St. Mark's Place in recent weeks:

“It makes me feel uncomfortable. It makes our city dirty and noisy,” said neighborhood resident Olga, 78, who’s lived in the East Village for 33 years.

“There was one woman who was making pee-pee and caca by the bus stop. It was very dirty and disgusting. Nobody wanted to use the bus stop.”

The owner of an eatery across the street also said the situation appeared to be spiraling out of control.

“They started camping out there when the weather got warmer and recently it got bigger,” the restaurateur said.

“Some of them have mental issues. They drink a lot and fight with each other. They throw bottles.”

Although the Post posted a video showing city workers cleaning out the sidewalk on Saturday, people had returned by yesterday... 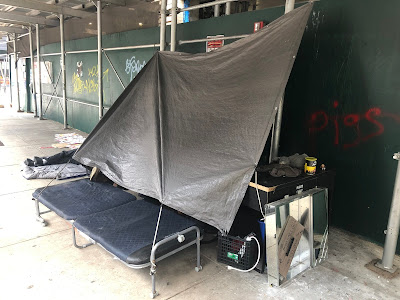 In recent years, this corner has been a gathering spot in the summer for travelers/crusties. In October 2018 (pre-sidewalk bridge), for instance, the NYPD set up a light tower here to deter anyone from congregating and camping out.

This corner is the site of the deadly gas explosion in March 2015.

Workers are currently wrapping up construction of a six-story, 21-unit condoplex for 45 E. Seventh St.

It’s all about the scaffolding. Buildings need to put it up, do whatever work they have, and take it down quickly, Having scaffolding up for years encourages people to shelter there.

The city should stop construction of housing especially for the wealthy until housing for the homeless and those with mental illness and or addiction have housing. These shelters show the ugly truth of our values as a society and the ineptitude city government has to act on a decades old problem. To the people who find this scary and disgusting just be happy you are not one of these people.

What happened to the law that required scaffolding to have permit numbers and expiration dates? Did the real estate industry pay off someone to have it disappear?

Get the scaffolding down. I've called and begged about the one on 4th and 2nd. There is no reason for it to be up. No work being done.

Chasing away the homeless is sort of like doing the same thing over and over again and expecting a different result each time. Where are these people supposed to go? There is no affordable housing anywhere in the city. Even the squatters have been gentrified out of existence. The homeless will just move to the next block and eventually they’ll be back, scaffolding or no scaffolding it doesn’t really matter. In fact they're back already. Trying to chase the homeless away is like a dog chasing its tail: it may seem like a good idea for a while, but you’ll never get anywhere while you’re doing it.

Noble neolani. These are not homeless people hanging out, they come from suburbs and hangout all summer around St. Marks

The people slouching here are the construction company and whoever put up the scaffold. If it is no longer needed take it down. Otherwise they are the ones creating the nuisance. It is a blatant show of that they care not at all about being a good neighbor to residents or other businesses. But hey, with only the profit margin as a motive to do business, no one else matters at all. Not the homeless attracted to the shelter of the scaffold who then just become scapegoats and pawns, not Olga the neighbor who doesn't see past the offensive behavior of someone living in distress on the street, nor the anonymous business owner across the street who is really upset because it is an image problem for the neighborhood. Welcome to late stage social cleansing in NYC.

@ David
I walked by or though there yesterday, these are people who are "down on their luck" as the old expression goes. I know who you are referencing but these were older people looking for shelter not for something to brag about on their next packsack trip to Europe.

dress them in Santa suits, and the city will be leave them alone and accommodate them.

I walked by the encampment on 2nd Ave and 7th street last week and one of the guys sitting on the ground there was smoking crack. It was extremely filthy. And there were what seemed like hundreds of bicycle wheel rims without the rubber tires. It didn't feel dangerous and the crack guy wasn't bothering anyone but it was strange to see in broad daylight in 2020, and i've been in this neighborhood for nearly 40 years. I never saw this even in the bad old days, not this blatant.

I live around the corner from the Church of the Nativity and the situation there, and on 3rd street is out of control. Those people sometimes have violent fights, and they are definitely not being mindful of others in terms of Covid. It is obvious that someone is selling heroine near the Church of Nativity. There are people nodding out on 3rd street at all hours of the day and night, every single day. There is always at least one.

There is something really offensive about people at home on their computers complaining about people who don't have a place to live.

You forget to mention the homeless encampment of the last four months on the NE corner of E. 6th St and Second Avenue under the scaffolding that has been up...since....who knows when. Madame Vo's Dumpling has not reopened in this location, but aren't they still responsible for cleaning their sidewalks? Aren't all commercial spaces responsible for the cleaning of their sidewalks? When did this law stop applying to these shop owners? They have just abandoned their spaces. Shame on Madame Vo's and all the other shop owners who have shrugged off any responsibility. Not to mention the city and our amazingly lazy Mayor who does nothing to help improve our lives and in fact does just the opposite.

I walked past 7th and 2nd last week under this encampment on an errand down the street. The festering aroma of urine, feces, sweat, feet, and body odor literally knocked me out in the humid air. It was horrifying. I kept wondering why though this particular area in the EV has become a top destination. I feel awful because many are mentally disturbed. We must do more for these individuals. Some require additional help than others in life. That's what taxes and charities are for. But where are our tax dollars going to and for whom? There must be a reset in how our local government addresses these very problems. As a liberal democrat, I regret voting for Mayor DeBlassio, not once, but twice. What a stupid fool I was then. This silly man never fails in showing us just how tone deaf, moronic, smug, and oblivious he is. HIs arrogance is breathtaking too. Makes me cringe when I see him speak on television. What an embarrassment. Perhaps it is time to have a republican mayor in NYC again when things operated better. I miss the days of Bloomberg to be honest.

Noble i walked by Saturday around noon at very most they were all under 30 year of age.i counted 5 cases of beers unopened plus several open cases. Most of them had beers in there hands; And also so many bicycle parts collected. These people are not homeless, the ones camped out only do it in the summer, all have cell phones and go home in winter time

Ah yes, we're going back to the old EV -- there was someone shooting up in my doorway around the corner, I would have said something but for the needle in his hand.

Under Bloomberg, the cops beat up the homeless and cycled them through the courts and jails at great expense to the city. Just because you didn't see them doesn't mean they weren't there.

Bloomberg is the person who famously said that NYC is a luxury location and that not everyone can afford to live here ... and then went on the make that much more of a reality than it had ever been previously. He decided to re-make NYC to his own idea of a glossy, expensive location where nobody gets their hands dirty, so to speak - no garment center workers, no flower district, no car repair shops in LIC, etc.

So now we're all living in a place where (a) bigger is better, (b) unaffordably expensive is the name of the game, and (c) ugly glass towers are the preferred style. THIS is Bloomberg's NYC, and I hate what he did to this city, especially since he [like de Blasio] is actually from BOSTON, and I don't think he has any "feel" for what it is that's always made people flock to NYC. (Hint: It wasn't empty glass towers built for oligarchs.)

And the homeless were notably not on Bloomberg's agenda, either, except as a talking point.

I'd vote for Bloomberg again if he ran. De Blasio does nothing but say over and over again how bad things are "unacceptable" yet he rarely does anything to change it.

growing up in the neighborhood (30+ years ago) there used to be needles all over the sidewalks (especially parks) but I had never actually SEEN someone putting a needle in their arm. Seeing people actively using in the middle of the day on the sidewalk has somehow become the new normal the past couple of years. It's extremely unsettling. As far as helping people goes, a lot of the shelters (if not all) have curfews as well as sobriety requirements that the homeless have compared to jail. Also from the one's I've spoken to there's a ton of violence, mentally unstable people and theft that they'd rather not deal with within the system.