The Starbucks on 2nd Avenue and 9th Street closes on Monday 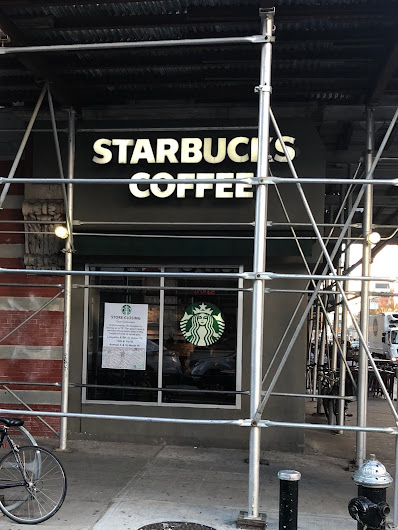 Store closing signs are now up at the Starbucks at 145 Second Ave. (Thanks to Steven for the photos and tip!)

Per the signage, this outpost closes on Monday here on the northwest corner at Ninth Street... 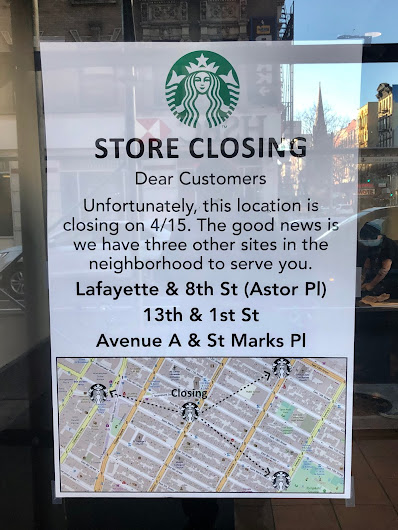 This was expected, as the storefront was recently listed for rent. (Price is "negotiable.")

No word on why this location is closing.

Last June, Starbucks announced that it would close 150 "poorly performing company-operated stores" in 2019, "mostly [in] urban areas that are densely populated with Starbucks locations," as CNN reported.

This makes the second local Starbucks in recents months to shutter. The outpost on Broadway at Ninth Street closed in early January.

Other EV Starbucks are located on First Avenue at 13th Street, First Avenue at Third Street and Avenue A at St. Mark's Place. The 23-year-old location on Astor Place received a major interior renovation last fall.

Previously on EV Grieve:
145 2nd Ave., currently a Starbucks, is for lease
Posted by Grieve at 4:30 AM

"13th & 1st St"? Now that's one Starbucks location I'd actually be interested in visiting.
I guess you'd just take the W or D to 18th street and walk from there.https://upload.wikimedia.org/wikipedia/commons/0/06/18_Street_fake_2_vc.jpg

“13th & 1st St” is exactly where all Starbucks should be located!

Good - Third Rail is excellent, and for swilly coffee there are like 3 Beans.

There was a group of people who lived here - there was never a chance of getting a seat in this store and I stopped frequenting it.

Every market has a top: have reached the brim?

"Poorly performing": I wonder what the corporate cup's NYC margins look like. Coffee done right tends to stick: there's no shortage of EV competition, much of it independent.

A friend who founded his own successful coffee company recounts turning away from the Siren Song of Seattle, heard often in his office, and always accompanied by an enormous check. To his credit, he continued to decline.

This makes me very sad :(

The bathroom in this Starbucks has seen more heroin flowing through it than the cars used to smuggle drugs in The French Connection. Yesterday there was a big gathering of Crusties on St. Marks Place, checking in for The Annual Crusty Convention I suppose. Also heard: reports of large groups of Crusties converging on Broadway on the Upper West Side. I looks like we have a bumper crop of Crusties coming through this year, and now their favorite bathroom is closed.

As for all the regulars in the laptop brigade who took over all the tables every day, they will probably head over to one of the dueling Beans on 9th Street, or Starbucks on Astor Place, making them even more overcrowded. It appears that students no longer go to libraries to study, which makes it even harder for these businesses to survive. The drop off during this spring break was amazing, as most coffee shops seemed relatively empty duing the day.

This closing is probably good news for Mud, and bad news for The Beans, since you can never get a table or place to sit, but you can always go to the bathroom there.

My experience has been different- this is the one Starbucks in the neighborhood where I could always find a seat. At Astor Pl, 50-70% of the seats are taken by people not purchasing coffee or food, just taking up space while on their laptops.
3rd St and 1st Ave only has six tables and 2 stools, so rarely available seating.

That's too bad -- I don't like Starbucks' coffee or care much for its ubiquity, but I admire the way the company has (unless I haven't scrutinized the press releases closely enough) invested in its employees. If we're going to have chains, I would favor those with Starbucks-like ethos.

One thing I will miss is their ice cold chilly air on a hot July day. This Starbucks had the coldest air conditioners outside of the walk in freezer room at Western Beef. There goes our cooling center.

My go-to cup in the neighborhood is Porto Rico; it's not a sit-down coffee shop, but for $1.50 you can get your [own] cup refilled with the best coffee around. (It recently was $1.25—used to be 60¢—but inflation is hitting everything pretty hard these days.)

Of course there's also the Porto Rico in the Essex Market—soon to move across the street—and the one over on Bleecker street.

One less Starbucks is not a great loss for the neighborhood. There is a lot of good coffee within a few blocks of here. The question is will this location sit empty for a year like so many other storefronts in NYC. Bring on a vacancy tax!

Meghan, Meghan and Meghan are gonna be pissed.

I have spent so much time here working on my book on the bench near the window. I could stay as long as I wanted. Inexpensive refills. Cool employees. Free Wi-Fi. Access to the bathrooms if and when the crusties weren't occupying it doing who knows what. I will need to speak to my therapist about this.

Years ago chains would keep marginal stores open just to show the flag...We're here! But the new mantra of the corporate business is" You can make more money by not spending money. The 2nd Ave Starbucks didn't pull in enough. .. so... close it.

6:03 said “I could stay as long as I wanted.” And that’s the whole problem, and that’s why there are never enough open tables, The minute one becomes available, somone else takes it. The worst is when you see two people on laptops sharing a table, who obvioulsy know each other, and as soon as somone at another table leaves, one of them scoots over and takes the open table, ignoring everyone who is standing there waiting for a table, Then they sit there all day, not buying anything. It’s mo wonder Starbucks is shutting down so many stores.

Was this the Bulgin' Waffles location?

Not a fan, but maybe if Starbucks had a turnover policy (3 hour maximum sitting time, charge for laptop plug-in or restroom use), and discouraged freeloaders sucking up seating space, they might be a bit more profitable.

I would love to see the Bean's books. Is there much profit in paying prime rents, selling someone a cup of coffee for three or four dollars, and having them sit for hours? It does not seem to me a way to get rich. Maybe it's like they say of some franchises, it's hard to survive with one store, but you can do well with several. The original Abraco seemed to have it all, small store and presumably reasonable rent, and a constant flow of customers . . .

good riddance! I hope all the Starbucks hemorrhage money and soon depart.

I agree with many of the commenters. Customers need to be mindful of others. A lot of them are cheap, have purchsed nothing and have nothing better to do than just hang out all day at their laptops. If only I was afforded such an existence. When I had time to work on a project on my own laptop, it is nearly impossible to to locate an empty spot. Starbucks is struggling. They probably can't justify the amount it costs to operate certain locations when revenue is down. It makes sense they are reducing the number of stores in the area. It was too much to begin with. And to the individual who said they will have to discuss this impending closing with their therapist really does require professional help.

Orchidea is going to re-open there!

Every Starbucks has their own group of regulars who come in and stay all day. This store on 9th Street used to have an older lady who would scream at people if they bothered her, so they left her alone. She never bought anything. There ws also a guy who had endless array of laptops, keyboards and electronic equipment who would camp out at the table next to the bathroom, using every single electrical outlet he could plug into. No one ever asked them to buy anything or leave. If he had an electric car he would have plugged that in too.

The Starbucks on 23rd St at Peter Cooper is the worst of all. It has an old guy who looks like a former body builder who sits in the most comfortable corner table with the nice cushioned bench seat all day, every day. Unless you get there at 8AM you are not getting that seat. The staff gives him free ice water, and then he “borrows” a newspaper from the newsrack and reads it all day. There are a couple of homelss guys who also come in and take over a table for hours, with all their backpacks and stuff piled up on the chairs.

Then at the one in StuyTown there are the school kids who come in every day after 3PM, and take up every available seat while drinking anything with a high sugar content. Plus there are NYU Dental students studying all day. How Starbucks makes enough money to stay open is a mystery, but with all the closings it looks like Wall Street won’t tolerate stores that don’t perform anymore.

That corner has been cursed since the Orchidia closed in 1984.

Bulgin Waffles was on 1st Av no?

I LOVE the comments on this thread. They are epic.