Drawing lines ahead of the new Avenue C bike lanes 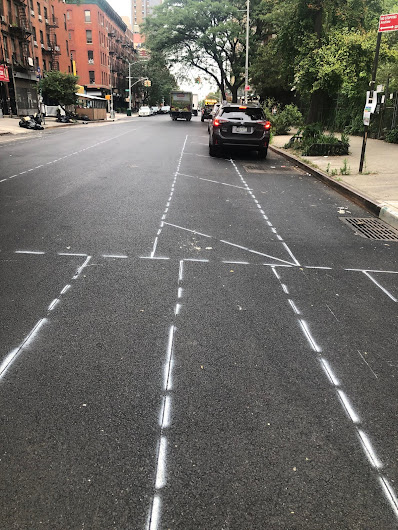 From this past week... workers from the Department of Transportation started marking Avenue C for the new bike lanes.
Dave on 7th shared the top photo from between Ninth Street and 10th Street. He notes that on this stretch, there are also new "No Standing" signs installed.
The new bike lanes will eliminate some free, non-metered street parking, which was the focus of a story this morning on NY1. Local Uber driver Myen Uddin told the station that he is concerned about being able to find a place to park.

... with outdoor dining structures and Citi Bike stations already replacing what used to be non-metered parking spaces near Avenue C and East 9th Streets, concerned residents like Uddin believe if the free parking spaces go away, he'll soon have to move outside the city.
"It's too much challenge for me for me right now," said Uddin. "I gotta leave the city. Go somewhere else."

NY1 also spoke with a local resident, Thomas Grenier, who welcomed the changes.

"The city is historically centered and organized around cars, so anything that will make the city more friendly to renewable energy and bicyclists is a good thing," Grenier said.

Meanwhile, other markings along the avenue show the buffer zones that will protect cyclists from cars and trucks. 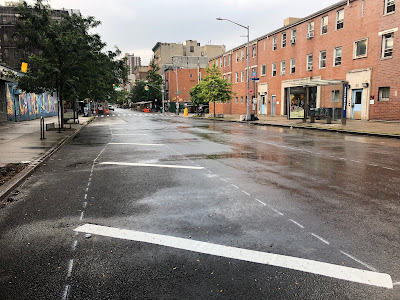 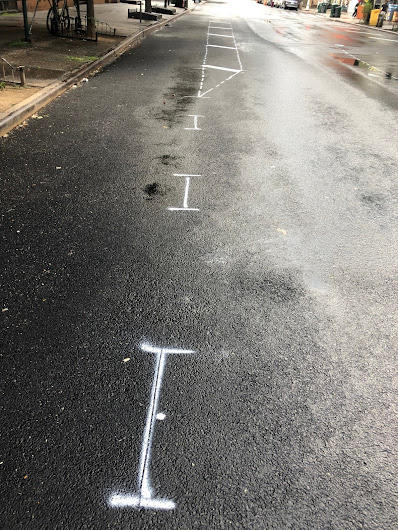 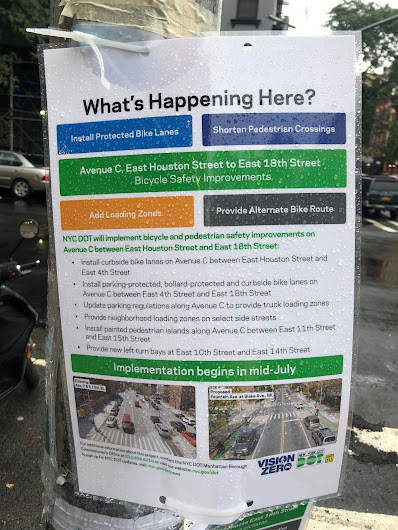 Improvements along C include:
• Curbside bike lanes between Houston and Fourth Street
• Parking-protected, bollard-protected and curbside bike lanes between Fourth Street and 18th Street
• Updated parking regulations to provide truck loading zones
• Neighborhood loading zones on select side streets
• Painted pedestrian islands between 11th Street and 15th Street
• New left-turn bays at 10th Street and 14th Street
You can find many more details in the presentation that DOT officials made to CB3 back in April. (PDF here)
As reported last fall, the DOT is adding the protected north/south bike lanes on Avenue C and East Houston Street to help offset the upcoming closure of the East River Park greenway.
Posted by Grieve at 9:35 AM

So great to see this: Avenue C will now be a much safer street for everybody: pedestrians, bicycle riders and car users. Bus riders will have a faster ride thanks to improvements that will be implemented on Avenue d and Avenue A (although only south of 6th Street which is pretty laughable).
Now we just need the city to create a real Open Street on Avenue B.

Rejoicing for these bike lanes, while also feeling some pity for all the car drivers who are going to spontaneously combust as a result.

Hardly room for cars to pass and if you think drawing lines on the street will protect cyclists you haven't spent enough time riding a bike in NYC.

All this means is that those spaces will now be occupied by Delivery, Amazon and UPS trucks.

If someone from the Department of Transportation Alternatives actually rode a bike in NYC, they would realize how utterly awful an experience riding in one of those segregated gutter lanes is.

Constant conflicts with pedestrians, being blocked at intersections by turning vehicles, not to mention all the wrong way riders (after all, it’s “just” a bike lane, not a “real” street), and all manners of motorized vehicles slaloming through the mix at 20mph.

No thanks, I’ll stick with Avenue D. Nice, wide, and plenty of room for every one to get around. As it should be.

""The city is historically centered and organized around cars, so anything that will make the city more friendly to renewable energy and bicyclists is a good thing," Grenier said."

This is not true. The city was organized around commerce and the defense of the City. This is just more Elite planning to turn us into euroturdland- rich people and masked servants. These educrats want to remove individual autonomy and force everyone onto the data collecting "citbikes" or "uber". I haven't seen a single new place to lock up my owned bike in years, and most of those are made unusable by bike shells, seemingly as if on purpose. but they stand to make a LOT of money!

It is incredible that while the MTA subway and bus system is continuing to hemorrhage, with service cuts and fare increases expected, that the City continues to focus funding on expanding the bicycle infrastructure.
Yes the MTA is a state agency but the City contributes.
Bus frequency and routes are key - bus lanes are useless with reduced bus frequency.

You can't go east west on 12th/13th without finding car/truck parked right in the bike lanes. It's a joke. Pedestrians step into the bike lanes anticipating the light change. Utter chaos.

moronic bike lane takeover. If someone is scared to ride in the regular bike lane they could've gone to first ave. There are so many residents (not myself) that rely on their vehicles and where will they park? There is limited public parking in NYC, they need to stop tearing it up without thinking for the sake of businesses, visitors and residents. I noticed that of course, where there is an outdoor dining shack, the parking was still allowed. Are the bikes supposed to just dissolve?

OK choresh, enjoy more double parked cars because they have nowhere to park. They need somewhere to go my dude.

this is idiotic. They should've left it as is.