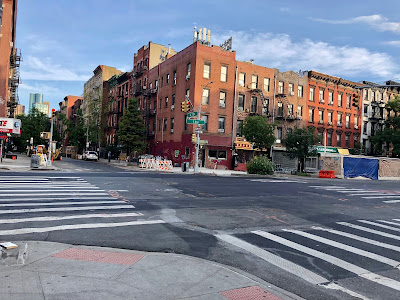 Here's some positive news about the roadwork taking place on the west side of First Avenue at Seventh Street in recent months.
A rep for the Department of Environmental Protection (DEP) told Community Board 3 late last week that the contractor has completed the water-main installation on the west side of the intersection and between First Avenue and Second Avenue.
Workers have also removed those noisy metal plates and filled in the roadway with temporary asphalt.
So far, so good with the west side of this intersection. However, the contractor is now scheduled to begin similar work on the east side of First Avenue and Seventh Street.
According to the DEP rep, crews will be installing the new water main on the east sidewalk of First Avenue, "about 40 feet (give or take) to the north of the north curb line and 40 feet (give or take) to the south of the south curb line of Seventh Street."
In addition, the project calls for the installation of a water main pipe up to the mid-block on Seventh Street between First Avenue and Avenue A. (The rep said that this will be done without "disturbing" any outdoor dining structures on Seventh Street east of First Avenue.)
"We have also requested the contractor to divide this work into phases," the DEP rep said. "This will minimize the number of road plates on location for the duration of the project."
No word on a timeline for the east side. The repair work on the west side of the intersection began in early May. 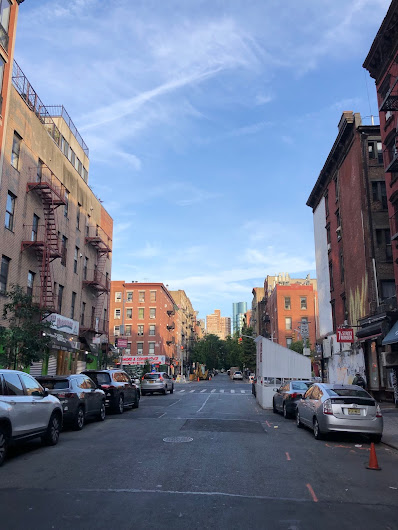 As previously reported, there were back-to-back breaks here in late December. The multiple ruptures sent water rushing into businesses and residences along Seventh Street between First Avenue and Avenue A.
The work earlier this summer disrupted the lives of residents and businesses due to the all-consuming noise, both during the day when the work crew was on the scene and after-hours when cars and trucks would pass over the multiple metal plates on the roadway. (Read our posts here and here.)
Our coverage, as well as a follow-up piece in the Post, apparently got the attention of the DEP, who told the paper:

"The ongoing upgrades to the critical infrastructure that serves the East Village must be carried out in a way that respects the residents and businesses in the area and we have directed our contractors to take several steps to ensure that this happens. Inspectors will be following up with regular visits."

Businesses and residents can file service complaints with Community Board 3 via this link.
Posted by Grieve at 5:00 AM

Not complaining about necessary work needing to be done -
but wondering about what this means for the bus lane/traffic
and if there will be water shut offs
and then brown silty water.

I have lived on 7th and C for years. I walk up and down 7th each day. There is something about this street which is plagued with hardship, catastrophe, delays and accidents. Fires, explosions, water main breaks, you name it. I don't know or understand what it is. These occurrences are burdens to so many people. Is it just me overthinking that something is really wrong or is it just the age and wear and tear of this old neighborhood?

I live on this corner and it’s ridiculous. Jack hammers have been my alarm clock now for months. I’m so happy that this is getting coverage, both here and in the NY Post. I hope it will expedite the very generous timeline they’ve been working toward.