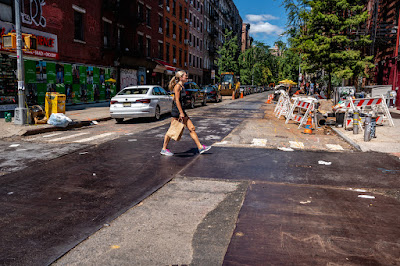 Photos and story by Daniel Efram
The ongoing roadwork on the west side of First Avenue at Seventh Street continues to negatively impact the quality of life for both residents and business owners along this corridor. Noise from backhoes, earth flatteners, jackhammers, circular saws, and cars and commercial cartage trucks on the uneven metal plates on the streets and avenues have brought this intersection to a boiling point.
Piping and construction materials, garbage and standing water are the norms. Human waste oozes from the rarely emptied portable toilets. Worst of all — there isn't any timetable for the end of the roadwork. 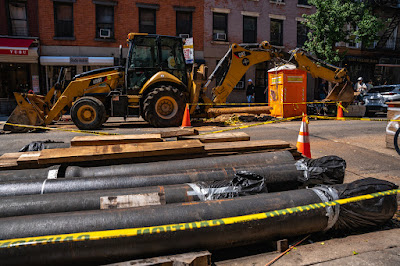 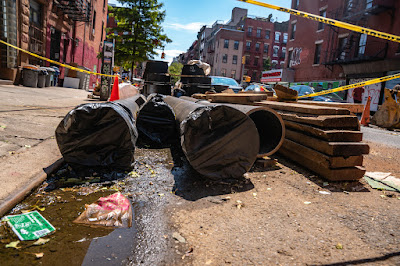 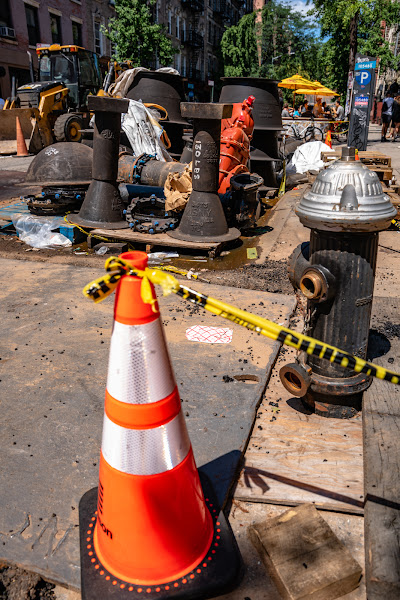 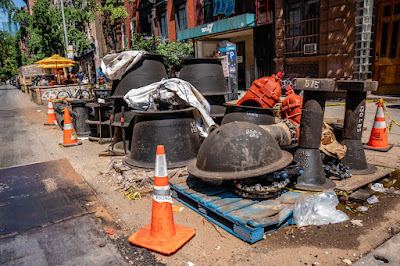 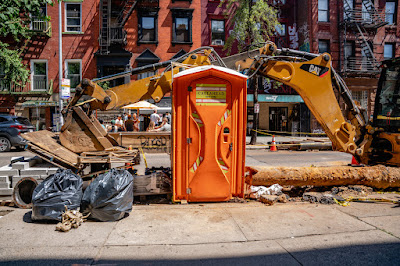 Crews reporting to the Department of Environmental Protection (DEP) returned to the intersection to replace portions of the water main back in May.
As previously reported, there were back-to-back breaks here in late December. The multiple ruptures sent water rushing into businesses and residences along Seventh Street between First Avenue and Avenue A.
In the weeks/months after the breaks, there was a patchwork of quick fixes on the intersection, and a hodge-podge of sinkholes and cracked surfaces emerged
The DEP contractors covered the various holes with metal plates, and the sound of cars, trucks and buses driving over the plates overnight has disrupted the sleep of residents living within earshot.
A resident assembled the above video in March — a best-of montage of cars and trucks driving over the metal plates.
However, it's not just the noise — the reverberations have caused cracks in several nearby buildings. Two residents in the area said when they called 311, the city eventually dispatched inspectors, who subsequently fined the landlords for the cracks in the buildings exacerbated by the ongoing street repairs. Meanwhile, there has been near-constant jackhammering in the past two-plus months, with some complaints being lodged for work on Saturdays. Residents said they are also irked by workers apparently slacking off on the job and crews taking weeks off without explanation. "I live in one of the buildings on the corner and have had a front-row seat to the shoddy work and laissez-faire attitude of this crew since December," said one resident, who asked to remain anonymous. "They show up at 7 a.m. with a crew of six or so, stand around yelling to each other until about 10 a.m., work for an hour, take lunch, work for a little bit more and finish by 2 or 3 p.m." According to the resident, only a few workers will be active at any given time, and they "walk around like they own the block." "They have taken over a huge part of our block and make no effort to clean up where they have worked or minimize the effects on the residents," the resident said. According to the residents I spoke to, there appears to be little, if any, oversight on this sprawling project. Several residents said they have reached out to local elected officials, including City Council Member Carlina Rivera, Assemblymember Harvey Epstein and Manhattan Borough President Gale Brewer, to request immediate accountability with a transparent timeline — delivered by an independent third party. According to Rivera's office, there is someone assigned to oversee this case. Residents and business owners hope that elected officials can have the work expedited with a definitive timetable. (Anyone wishing to file a complaint can use the subject "7th Street & 1st Avenue Construction Complaints." Community Board 3 has a service complaint here.) Updated 8/5 We asked Community Board 3 District Manager Susan Stetzer for an update. She said that her office has asked the DEP for a timetable and signage to let people know what is happening. As for complaints, Stetzer said to let her office know via the service complaint form here.
"We will not be able to fix all the problems, but we can try to have mitigated as much as possible," she said. And residents should file a complaint sooner rather than later: CB3 has an interagency meeting that will include the DEP this coming Tuesday. "So it would be helpful to have complaints before then," she said. 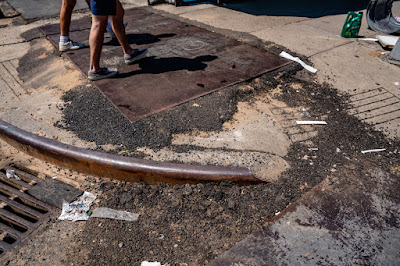 This is nothing compared with what we went through on Ave C for 21 months, with the sewage system replacement. Really, you're pretty lucky over there.

This situation is absolutely ridiculous and has been going on forever. What the hell are elected officials doing about this? And where does one report the problem?

I live around the corner from this, and once the water main break happened the water started tasting awful. So I hope they can finally finish and fix this correctly.

What a joke - I feel bad for the folks who have to put up with this 24/7 - these subcontractors are all the same - union dudes who don't care, know they are going to get paid no matter what with absolutely no oversight - this will be going on into 2022 -just watch

To 9:16 am having bad water. Consider getting a Zero Water filtration device from Bed, Bath & Beyond. I think Home Depot has them also.
I started using one a few weeks ago and the water quality is much better. It filters out the lead and other elements that are not good to consume. NYC H2O has a good reputation, but this overlooks the old pipes it runs through, which are not good.

I wouldn't consider anyone "lucky" who has to live with this mess, no matter how it compares to unwieldy street work in other parts of the neighborhood.

Ah, another instance of the full-employment-for-overpaid-union-workers "we can make this 6-month project take 2 years!" rule that seems to be in full force in NYC. Every union work site I pass has the same issues, and nobody in NYC government DARES to confront this issue. These workers are certainly not doing a full day's work, from what I've personally seen on many, many, many occasions and all around Manhattan. I presume the outer boroughs are the same.

But wow, IF there's a major water-main break, THAT somehow gets fixed in the twinkling of an eye... quite interesting, no?

FYI- I live on the corner and can tell you that the current mess is following on the heels of sewage system repairs and gas line replacements. It’s truly never ending.

This is typical of the way the city crews operate when repairing/replacing water pipes under the street. I live on East 3rd street, between 1st Ave and 2nd Ave. We have had repairs to the water mains under the street several times in the last few years.

At one point, the construction lasted over 6 months.The projects they worked on lasted anywhere from 2 weeks to 8 months. It was always the same. Workers would arrive at all hours of the day or night, work for an hour or 2, then disappear. Sometimes, a solitary worker would arrive 5AM to jackhammer deafeningly for an hour, Then disappear. This would even happen on weekends.

The impression I got is that these people act like independent freelancers. They do their work unsupervised at whatever time they please, any day of the week, and work independently of the other members of the crew.

Very often, they would begin their noisiest work at 7AM, and be finished by 9 AM. It was unbearable.

'i am just happy this is being worked on.

I live next to this, which has been going on months now. But it doesn't compare to noise fest that usually happens starting in the fall, by the bridge and tunnel + college crowd, which is going to be exacerbated by the open restaurants program imposed by Cuomo an DeBlasio, over the wishes of the residents. Fight the Open Restaurants program, while there's still time to do something about it.

Thanks Dan for the post. This is indeed another case of the failure of this city administration. So depressing.

uggg That clanging is one of those trigger sounds for many of us whoever invented those Metal Plates has a chair reserved in Hell (if ya believe in that sorta thing) for them, why the city can't just work on projects like this this 24/7ish until completion is beyond me
2:59 nailed it most of the work is done by contractors with seemingly zero official oversight and often open ended contracts

oooops Sorry Grieve 7:02pm in the above thread just wanted to clarify if it's ok, I meant 1:31 nailed it in my comment apologies

2:59 i agree with ya too but 1:31 made the point about the city using sub par no oversight contractors