It takes a court order to clean out the long-empty 89 1st Ave. 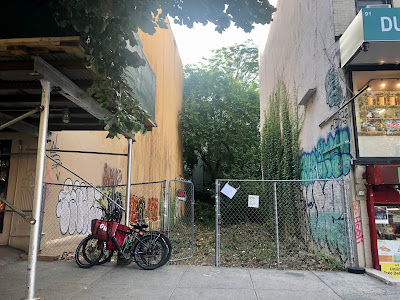 The long-empty lot at 89 First Ave. between Fifth Street and Sixth Street has been cleared of the weeds, mushy cardboard boxes and other discarded items that have turned the space into a paradise for rats.
In the spring, a nearby tenant told us that "the rat situation in the courtyards behind the building is dire." Some surveillance signage went up along the fence, though that didn't deter anyone, such as a nearby business, from using the space as a dump.
Apparently, it took a court order to clean out the lot...  legal documents affixed to the fence state that the city has a legal right to enter the property "for the purpose of inspecting and abating the nuisance existing thereupon in violation of the health and safety requirements of the New York City health code." 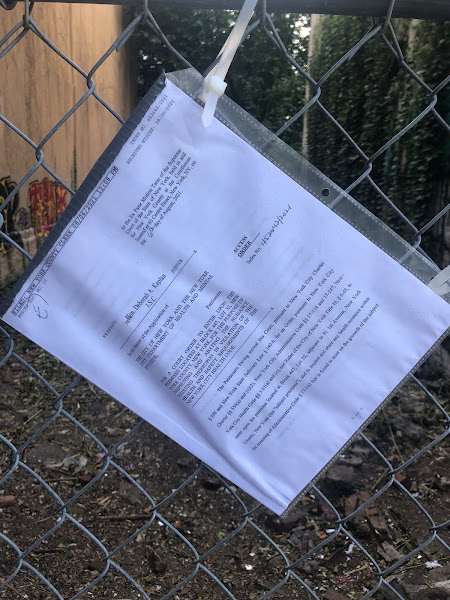 Some recent history here. In May 2020, another set of new building permits were filed with the city for the lot. According to the DOB, the proposed building is six floors with eight residential units and ground-floor retail. In total, the structure is 8,183 square feet. The plans were disapproved last fall.
This is the second time in recent years that plans have been filed for a new building for the address. In 2017, the city never approved plans for a similar-sized structure — eight units, six floors.

Daniel Toledano is still listed as the property owner and developer of the project. (Toledano is also listed as the lot owner that housed the 2Bn2C sculpture garden at 231 E. Second St. between Avenue B and Avenue C.)

In December 2017, workers dismantled the sculpture fence that lined the First Avenue lot for years (since the late 1980s, per one estimate). The fence was created at the former Gas Station (aka Art Gallery Space 2B) on Avenue B and Second Street by Claire Kalemkeris and Johnny Swing in collaboration with Linus Coraggio.
Previously on EV Grieve:
• Will this long-empty lot on 1st Avenue yield affordable housing?

• Workers remove the sculpture fence and prep lot at 89 1st Ave.
• Reader report: It's 'rats galore' at this long-empty 1st Avenue lot
• 'Rats galore,' the video sequel
Posted by Grieve at 5:00 AM

It is about time that area was a real mess. I wish the Green Thumb group could turn that section into a nice park for the residents of the area.

As the new york posts online format dwindles in terms of legibility, I so much appreciate Ev Grieves format and content

I live near there and would love that. Most of the community gardens are in Alphabet City. It would be nice to have one on First Avenue. Whatever happens with it, glad they cleaned up the mess.