Another new building permit filed for the long-empty lot at 89 1st Ave. 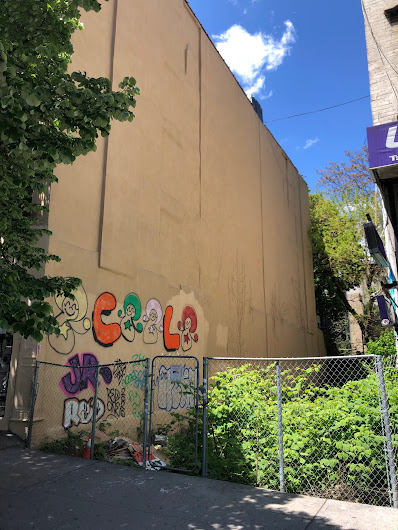 Another set of new building permits are now on file with the city for a development at 89 First Ave., the long-empty lot between Fifth Street and Sixth Street.

According to the DOB filings, the proposed building is six floors with eight residential units and ground-floor retail. In total, the structure is 8,183 square feet.

This is the second time in recent years that plans have been filed for a new building here. In 2017, the city never approved plans for a similar-sized structure — eight units, six floors.

Daniel Toledano is still listed as the property owner and developer of the project.

In December 2017, workers dismantled the sculpture fence that had lined the lot for years (since the late 1980s, per one estimate). The fence was created at the former Gas Station (aka Art Gallery Space 2B) on Avenue B and Second Street by Claire Kalemkeris and Johnny Swing in collaboration with Linus Coraggio. 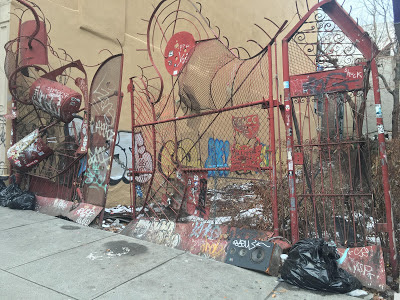 Previously on EV Grieve:
Will this long-empty lot on 1st Avenue yield to affordable housing?

Drilling and soil testing commences at the long-empty lot at 89 1st Ave.

the place is perfect as it is, thanks!

Why are people sad to see an empty, littered lot go? It is quite an eye sore. Might as well put this space to good use. At least it could create more housing.

It's not Littered. It's always been bucolic and serene. A piece of country in the City.

I think in this case, most people (including myself) are bummed about the disappearance of the beautiful welded fence that was there for so long. I lived catty corner to this plot off and on for years and passed by it every day, and always admired it.

An overgrown, empty lot it may have been, but considering that any new housing built in that space will most certainly be more luxury condominiums, I would rather have the empty lot 100% of the time.

Empty lots are beautiful in many ways. For those of us interested in the history of this city, these lots can offer little snapshots into the past. Easily missed details such as the old, faded advertisements painted on the exposed brick walls of the adjacent buildings, or a rare glimpse at the back of an old building normally unseen from the street, or the silhouette of a demolished building etched into the sides of the buildings still surrounding the area. The empty lot is much like a graveyard in some ways, an open space that serves as a subtle memorial to the building that once stood there. I inevitably wonder about all of the people that passed through the building over the years, and to the unique history that took place within its walls.

As I'm sure most are aware, in the more recent past, some of these lots were utilized by the local population in the creation of the community parks that dot the EV/LES. These parks are crucial havens for the inhabitants of the neighborhood, and need to be preserved by any means necessary. Perhaps under better circumstances, this lot could have become a community park, as well...

I live next door and would love for it to be a community garden.

Building burned down 5 alarm fire started in the walls electric 2 people died grandmother and grand son 9 years old. Fire burned all day in March 1972 gabbys store had a lot of plastic top 3 floors caved in. City took the building down a year later

I also live on the block and wish this was a community garden. I believe there is carpet spread around this lot to keep plants from growing and that's why it looks kind of a mess. The tiny bit of nature is healing, though, and I saw a hawk in there not too long ago.

I was interested in how the curb cut got there, so tried to do some research on the history of this lot. Never found out about the curb cut, but the 1900 census revealed the identities of the people who lived there, who seemed to be primarily from Prussia and were merchants/tradespeople. I couldn't find out what happened to the building, so maybe a fire?

Had my first shop in the back of the building did work for the landlord eddy gabby discount store. Still have my business doing mostly restaurants Mechanical work in the area BT REPAIRMASTER