Carving out a retail space at 56 St. Mark's Place 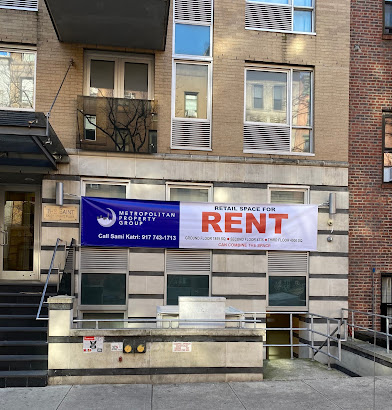 The 8-story residential building known as The Saint at 56 St. Mark's Place is now advertising retail space on the property between First Avenue and Second Avenue.
The retail for-rent sign that arrived on Friday shows that there are three spaces available — spread out over the ground, first and second floors and featuring more than 10,000 square feet in total. The space can also be combined. (The listing isn't online just yet.)
Not sure what's in the space currently ... or why this the right time to put more retail on the market when plenty of empty storefronts line the neighborhood.
Thanks to Steven for the photos!
Posted by Grieve at 4:55 AM 9 comments: 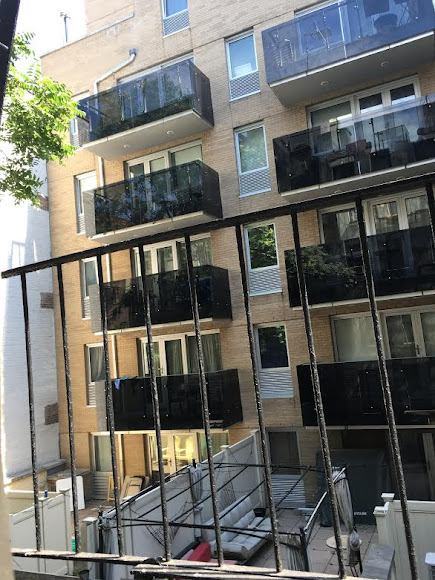 Residents who live near 56 St. Mark's Place, aka The Saint, have organized a community meeting tonight at 7 with Capt. Vincent Greany, commanding officer of the 9th Precinct, to discuss what they say has been non-stop partying at the 8-story rental built in 2005. The meeting will be outside No. 56, which is between First Avenue and Second Avenue.

The organizer of the meeting shared this background:

It has turned into a partying rental building, filled with fresh-out-of-college kids ... partying non-stop and terrorizing neighboring residents only several yards away from it.

The main noise issues stem from rooftop and some units with patios larger than their apartments. On the rooftop, tenants party till 3-4 am with DJs, climb onto the building's water tower, throw beer bottles and puke down to lower levels.

Large terraces are located on the level equal to the 2nd floor. Surrounded by buildings, sound vibrates like an amphitheater. The patios are hidden and only accessible through apartment entrances. It's not visible from the street and the tenants, knowing these issues, have been jeopardizing the quality of life of about 60 residents surrounding 56 St. Mark's Place. They watch movies with outdoor projectors, play music with outdoor speakers and have over 30 people getting drunk and hollering till early morning.

According to the organizer, the Saint is managed by Helm Management, who have "dodged efforts by several neighbors to speak to them about this issue."

Nearly a dozen other nearby residents shared horror stories about the Saint. Here's a sampling from one (edited for length):

First, let me say this — THE SAINT is an unholy nightmare that should be renamed THE SINNER.

Since the beginning of March 2016 there have been 28 parties or gatherings that have gone beyond 12:30 at night. Many have carried on until 3 am, or 4 am, or even later. All of them massively disturb the peace, prevent me from sleeping, disrupt work routines and cause aggravation and ill will. I feel psychologically and emotionally attacked, disturbed and drained. It has ruined the peace in my home and neighborhood.

I have to deal with:

• Roof parties — often with DJs and up to 60 or more drunk, rowdy, sometime belligerent guests — inevitably every weekend (sometimes both Friday and Saturday nights). Parties and gatherings also often occur on Sundays and during weeknights.

• We live inside an enormous fishbowl and every sound that is made on the roof or terraces it is magnified, reverberates off the walls of the other buildings. Sitting in my bedroom sometimes sounds like I am in the middle of a nightclub.

• Tenants screaming insults when I ask them to be quiet, or to turn down the noise, or to shut the music off. Insults have included, “Suck my cock”, “Fuck you”, “Eat shit”, “You sound foreign, why don’t you fucking go home?“

• Feeling as though the only solution is to move.

Of particular concern is the building's water tower. Per a neighbor:

Tenants have also taken a particular liking to climbing a tower located on the roof, accessed by a narrow ladder, and turned it into their “sky lounge”. They (and non residents, including minors) sit on top of it and drink alcohol, smoke marijuana, flash lights, scream at the tops of their lungs, play music, throw bottles and vomit over the edge, etc., etc. 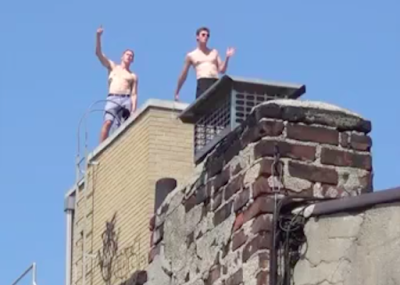 People use the tower at any and ALL times of the night and morning.

The dangers are SIGNIFICANT. There is no railing on top of it, there is a 35 foot drop to the roof, girls in heels and formal dresses often climb on top of it then scream “How do I get down”. At times as many as 20 kids (usually drunk) have packed on top of it — a space that is no more than 7ftx10ft. If one of these kids falls (odds are one of them will one day) they will SERIOUSLY injure themselves. 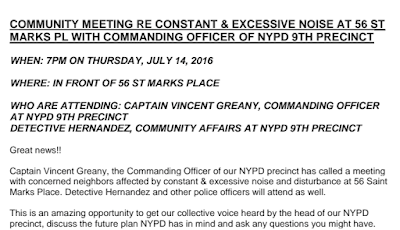