On the corners of Avenue C: Albert Trummer's incoming Sanatorium; a closed pizzeria

Yesterday, we reported that the demo orders are now in to take down the Mobil station on Avenue C and East Second Street/East Houston to make way for a 10-story residential building.

This prompted several readers to note the changes on other nearby corners of Avenue C.

So let's start with the northeast corner of Avenue C and Second Street... as reported last summer, mixologist Albert Trummer is opening a cocktail bar in the space that last housed Adinah's Farm... 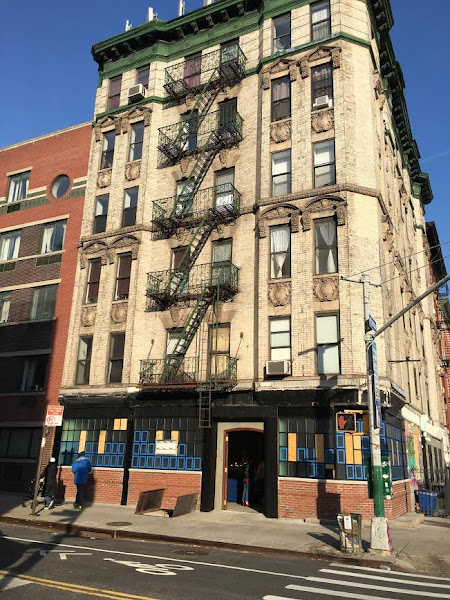 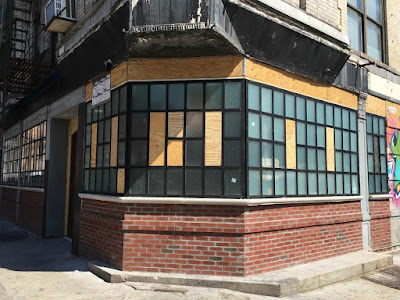 The space is called Sanatorium ... no word on an official opening date just yet... (their Instagram account said February...)

Meanwhile, Majesty Pizza and Grill on the southwest corner of Avenue C and Third Street closed back in January... 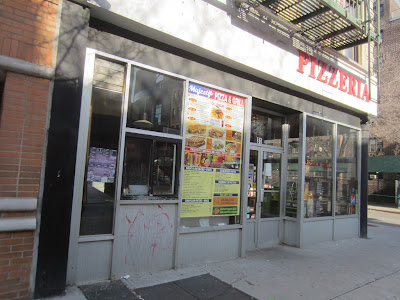 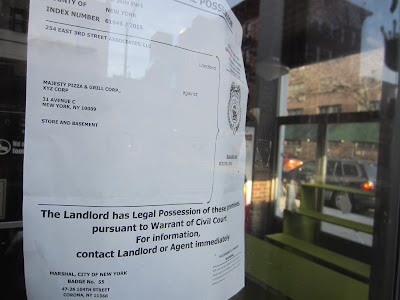 An EVG reader who lives nearby notes the pizzeria started selling fresh fruits and vegetables at the end of the year... to give people who didn't want pizza a reason to stop by... apparently they didn't.

And across Avenue C... the corner buildings remain abandoned... 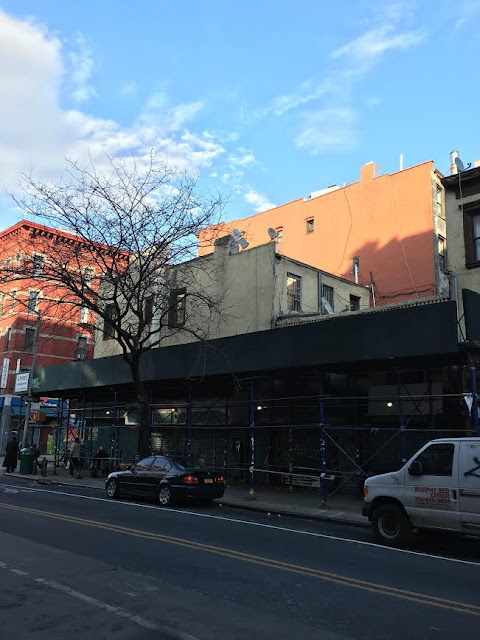 There has been a full vacate order on 32 Avenue C at the corner since August 2012. There's nothing on file with the DOB to suggestion anything happening here any time soon.
Posted by Grieve at 4:14 AM 14 comments: 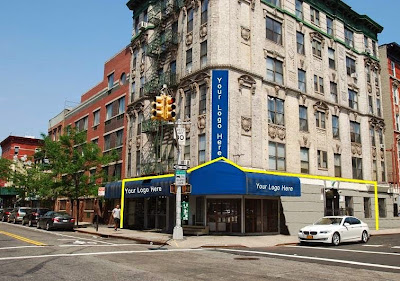 Despite the committee's thumbs up for Trummer — who made headlines for his flaming concoctions at the Prohibition-era styled Apothéke in Chinatown — members of the tenants association at 262 E. Second St. are circulating a petition to oppose part of the unnamed bar's plans, such as the DJ and hours of operation, approved at 5 p.m. to 2 a.m.

According to the petition:

The Community Board approved because the SLA (State Liquor Association) would approve the license and that if the board actually denied it (which they were inclined to do) it would have meant that the SLA would grant the license and the establishment could stay open until 4am. A motion was passed and the establishment can be open 7-days a week from 5pm-2am. Apparently this falls under the 500-foot rule. Since there are only 2 other establishments within 500 feet of 14 Avenue C holding full liquor licenses it makes it very easy for 14 Avenue C to secure a new license.

Albert Trummer, the new owner, is proposing to serve $1,600 bottles of champagne and there was bottle service listed on the menu that he submitted to the board – including $375 bottles of vodka and a single cocktail priced at $300. Mr. Trummer wants to have a DJ for “background music” and serve "tapas" style food, though there is no kitchen (except a "prep kitchen" which consists of a countertop).

We support the #SAVENYC mission and understand that this is a small business that wants to open. However, this particular business is completely incongruous to the neighborhood and we fear the collateral damage it could inflict on the other small businesses on the block...

Neighbors include Barrier Free Living, a shelter for homeless men and women with mobility impairments and/or severe medical problems. 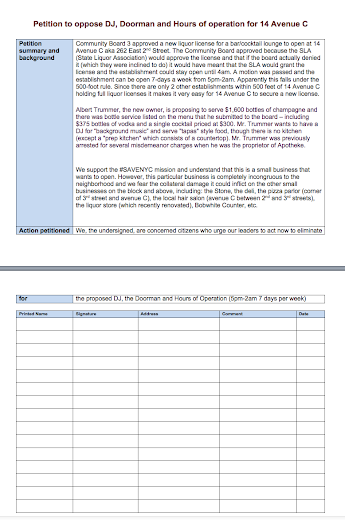 The petition mentions that Trummer was arrested when he ran Apothéke. According to published reports, FDNY investigators arrested Trummer in 2010 after setting alcohol aflame on the bartop at Apothéke on Doyers Street. He was charged with reckless endangerment and criminal nuisance, both misdemeanors. After the arrest, he told the Times: "My intention was not to hurt anybody. I'm an artist. I'm a mixologoist. I'm a cook. But I'm not a pyrotechnic maniac."

14 Avenue C was previously home to Adinah's Farm, the market that closed for good last June.

Previously on EV Grieve:
Mixologoist Albert Trummer looking to bring a cocktail bar to Avenue C
Posted by Grieve at 4:33 AM 21 comments:

Albert Trummer, perhaps best known for his flaming concoctions at the Prohibition-era styled Apothéke in Chinatown, has designs for a new cocktail bar at 14 Avenue C, home of the former Adinah's Farm corner market.

Trummer's name is on the 30-day notice submitted to CB3 ahead of Monday night's SLA committee meeting. 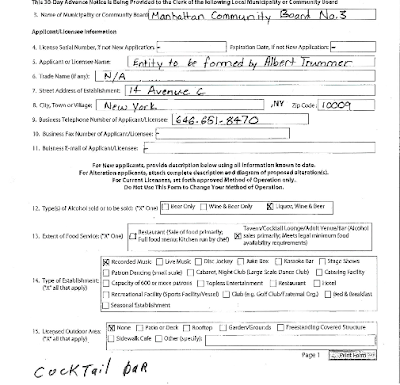 FDNY investigators reportedly arrested Trummer in 2010 after setting alcohol aflame on the bartop at Apothéke on Doyers Street. He was charged with reckless endangerment and criminal nuisance, both misdemeanors. After the arrest, he told the Times: "My intention was not to hurt anybody. I'm an artist. I'm a mixologoist. I'm a cook. But I'm not a pyrotechnic maniac."

He vowed to fight the charges, but, in September 2011, he pleaded guilty to disorderly conduct and received $120 in fines and two days community service.

Most recently Trummer has been opening bars in South Beach.

The questionnaire with more specifics about the new bar here at Avenue C and East Second Street has yet to arrive on the CB3 website.

The questionnaire (PDF) is now online. The proposed hours are 4 p.m. to 2 a.m. Monday through Saturday. The configuration shows 10 tables seating 45 people, and one bar for 15 people. The unnamed bar plans to serve a tapas-style menu.

Adinah's Farm closed for good last June. The asking rent for the space had been $17,500.

The SLA committee meeting is Monday night at 6:30 in the CB3 office, 59 E. Fourth St. between Second Avenue and the Bowery.
Posted by Grieve at 4:30 AM 21 comments: