Drv-In moving to the East Village?

Saw the following item in BizBash yesterday about Grand Opening's expansion away from its current digs on Norfolk Street:

The folks at Grand Opening, the small Lower East Side venue with a rotating roster of quirky activities, are expanding their offerings—both indoors and outdoors. The fall and winter concept was Drv-In, an intimate screening room outfitted with a 1965 convertible four-door Ford Falcon. This summer, the same concept (and the same car) moves to a larger, permanent venue in the East Village. The new Drv-In has a reception area and concession stand, and while the car still only seats six, the space can hold as many as 15 guests. For a bigger group, the company’s new summer drive-in series, Cars Under the Stars, takes over parking lots around the city.

According to the link for the new Drv-In supplied by BizBash, the address is 215 E. 4th St., which also happens to be the address for the very-much-still-open wine-and-tapas joint In Vino. 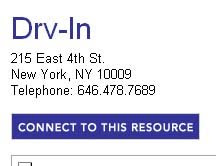 Or maybe the new location is the vacant storefront to the west of In Vino. Though that place still has a "For Rent" sign above it. 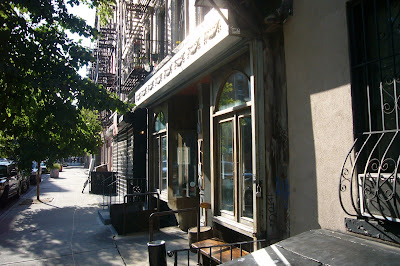 Posted by Grieve at 7:12 AM No comments: