Ella Lounge has apparently closed for good on Avenue A 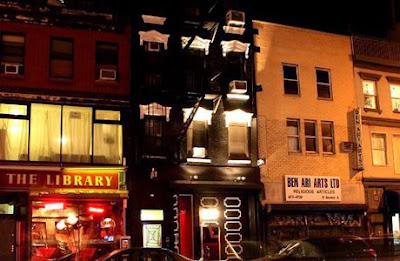 Ella Lounge, the duplex bar/lounge named for Ella Fitzgerald at 9 Avenue A, has apparently closed.

BoweryBoogie reported yesterday that Ella's last night was Jan. 3. While there isn't any mention of a closure on Ella's social media properties or website, the phone has been disconnected.

The retro space (previously Julep, Velvet and what else?) with live music and various acts opened in September 2008 with a news release that noted:

"Ella is our spin on Hollywood glamour and the roaring 20's. We want to capture the energy and flair of the time by bringing it back with our music, design and staff..."

The 1700 square foot top floor of the space will have a combined feeling of the décor of Hampshire House, The Carlyle and Hollywood's Lake Arrowhead Springs Hotel as well.

Within a year, that old Hollywood glamour had apparently faded with hosted events such as... 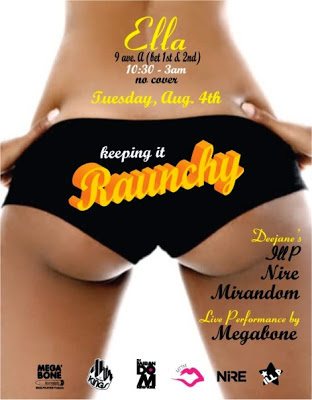 We never made it to Ella. We were admittedly turned off from the get-go by ownership (The Gallery Bar) referring to this part of the neighborhood as the LEV — as in "Lower East Village." Then there was the requisite Thrillist writeup, which played up Ella's exclusivity: "reservations are referral only, and the door policy is doorman's discretion — so there's a decent chance you'll be stranded outside."

Thanks, but we'll stick to The Library next door.
Posted by Grieve at 4:56 AM 8 comments:

Email ThisBlogThis!Share to TwitterShare to FacebookShare to Pinterest
Labels: bars that are now closed, Ella

Posts that I never got around to posting: Ella's new "spin on Hollywood glamour and the roaring 20's"? 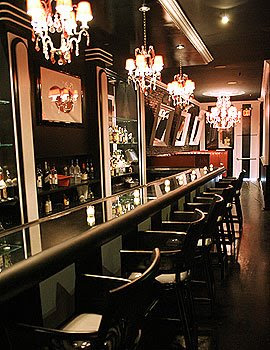 A reader asked me if I knew what was going on with Ella, the upscale piano bar/speakeasy that opened last fall at 9 Avenue A.

Uh, I do not. I've never heard much about it. Eater ran Ella's epic opening press release:

For immediate release ˆ September 2008 - Carleton Varney, one of America's most innovative and respected interior decorators, brings his Dorothy Draper touch downtown to Avenue A. This fall, Varney and the young architect Robert Stansel III (GalleryBar), will showcase their designs of the new cocktail/piano lounge, Ella. Mr. Varney, best known for his work on Joan Crawford's homes and the Waldorf Towers, has proudly lent his flair and vision to his nephew Josh Boyd's next venture. Nightlife entrepreneurs Darin Rubell (cousin to Steve Rubell), Josh Boyd and Jordan Boyd have made what they call the LEV (Lower East Village) their place of business and community for the past eight years. Ella will be their third nightlife venture following the successes of New York City staple, Plan B and alternative art-space, GalleryBar.

"Ella is our spin on Hollywood glamour and the roaring 20's. We want to capture the energy and flair of the time by bringing it back with our music, design and staff", says owner Josh Boyd.

The dynamics of music at Ella will range from solo musicians to small bands. Emerging and established pianists and eclectic New York City DJ's will host nightly shows in the intimate piano bar. This downstairs room will seat 40 people for performances and exclusive private events. Musicians such as Regina Spektor, G Love, Alexa Ray (daughter of Billy Joel and Christie Brinkley) are slated to perform. The 1700 square foot top floor of the space will have a combined feeling of the décor of Hampshire House, The Carlyle and Hollywood's Lake Arrowhead Springs Hotel as well. Door designs from the original Camellia House in Chicago's Drake Hotel, will enhance Varney's decorations in the Dorothy Draper style ˆ a style Varney used this year at the 80th Academy Awards Architectural Digest Green Room design.

A list of $12 specialty cocktails, such as the Plum Gin Fizz (Muddled sour plum, 2oz Gin, splash of simple syrup, splash of lemon juice, shaken in a Collins glass) will be served nightly. Bottles of beer are $7 and glasses of wine will range from $10 to $20. Rotating selections of bar snacks, such as prosciutto, olives, and Gus' Pickles, from neighboring stores and the farmer's market, will be offered daily. The Ella staff will fit the theme dressed in classic sexy and sophisticated 1920's attire.

Anyway, the reader sent along what Ella hosted Tuesday night... 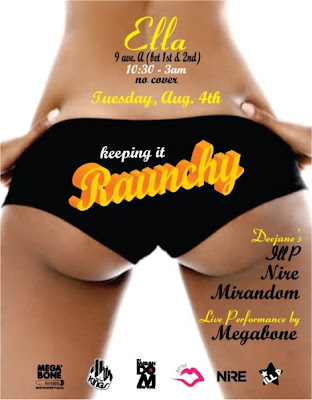 The guy who decorated the new bar in edgy Alphabet City

The real estate section in the Post this week includes a profile of renowned interior designer Carleton Varney. He designed the fancy new cocktail lounge Ella, 9 Ave. A, in the Lower East Village -- as its owners refer to the area -- that serves $12 cocktails. (Reservations are referral only.) Here's a passage from the Post:

Later, down in edgy Alphabet City, a rather different crowd raised the roof at the public unveiling of Varney's latest design project, a duplex cocktail lounge and piano bar called Ella.

At first glance, Varney, 69, hardly seems an obvious choice to decorate a bar on Avenue A. As chronicled in "Houses in My Heart," the designer built his considerable reputation working in far more upscale enclaves.

Previously on EV Grieve:
New bar on Avenue A has pianos, fancy drinks and referral-only reservations
Posted by Grieve at 10:01 AM 1 comment:

Email ThisBlogThis!Share to TwitterShare to FacebookShare to Pinterest
Labels: Avenue A, Ella

New bar on Avenue A has pianos, fancy drinks and referral-only reservations

Thrillist has the following item today on Ella, the piano bar at 9 Ave. A that opens Thursday:

From the Gallery Bar guys, Ella's a semi-private, bi-level, black-lacquered and mirror-bedecked lounge that aims to provide classy ivory tickling from both accomplished house acts and the occasional signed artist (read: people no longer offering music lessons). The intimate, b&w-tiled downstairs sports a jet-black upright Yamaha, a small stage for jazz/blues/torch singers, and a DJ booth, all under a multi-colored lit ceiling evocative of Willy Wonka's terrifying psychedelic tunnel. For a break from the crooning, walk up to the chandeliered, Tinseltown-chic bar & lounge: floral-print couches and semi-circular red suede banquettes fresh from the '07 Oscars flanking a 15-seat bar, which slings speciality cocktails inspired by post-WWII cinema, e.g., the vodka & muddled grape Daisy Kenyon, and the ginny Mildred Pierce ("if you loved Working Girl...").

Ella's opening Thursday, reservations are referral only, and the door policy is doorman's discretion -- so there's a decent chance you'll be stranded outside with Paul and Davy, who's still in the Navy, and probably still hasn't finished The Duplex Supremacy.

Oh, and here's their drink menu. 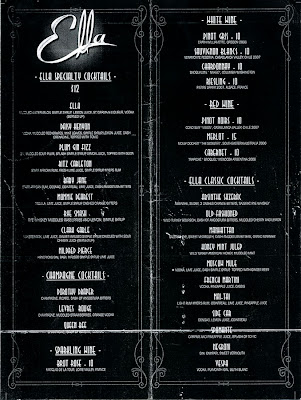