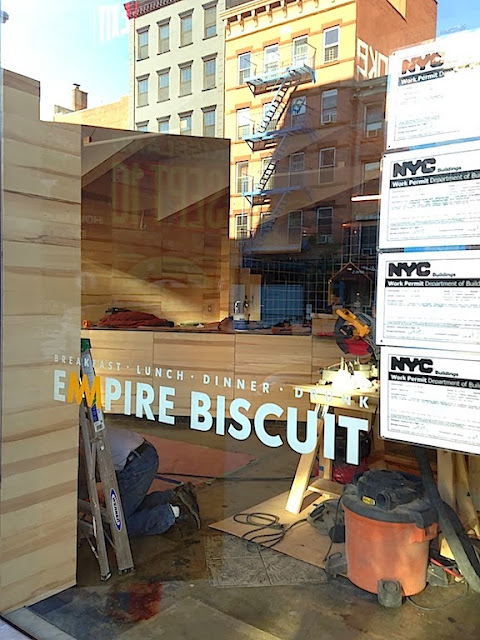 Empire Biscuit officially opens this morning at 8, according to DNAinfo. (Empire was open last night from 6-10.)

The flaky Southern favorites will be topped with a selection of gourmet spreads, including goat cheese and black pepper butter, pineapple and thyme jam and pumpkin pie spread, owners Jonathan Price and Yonadav Tsuna said.

Here is their menu:

Starting Friday, Empire — located at 198 Avenue A — will be open 24 hours. The space was previously home to Habibi Lounge.

Previously on EV Grieve:
Incoming Empire Biscuit on Avenue A launches Kickstarter campaign (121 comments)
Posted by Grieve at 5:00 AM 65 comments:

Renovations continue at the former Habibi Lounge space on Avenue A near East 12th Street ... where Empire Biscuit will be serving country-style biscuits and biscuit sandwiches 24 hours a day (and no liquor license) ...

Now founders Jonathan Price and Yonadav Tsuna have launched a Kickstarter campaign to raise $62,500 by the end of the month to help with the opening costs.

Besides potential construction delays, the major risks for our restaurant are post-opening. We have a strong team in place, a carefully developed concept and menu, a great location and space, and a nuanced financial model. So the basic challenges/risks that remain are controlling food cost and labor once we're up and running.

You can find more info here. Or you can watch the above video ... (they discuss the need for $$$ at the 4-minute mark).

Empire Biscuit is expected to open in 6-8 weeks.

Previously on EV Grieve:
[Updated] Reader report: biscuits and jams for former Habibi Lounge space on Avenue A
Posted by Grieve at 9:12 AM 122 comments: 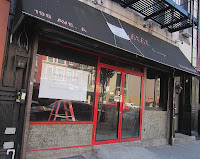 [First, I assure you that this is not an April Fool's gag...] Reliable sources tell us that the former Habibi Lounge space on Avenue A near East 12th Street .. will soon be home to a ... 24-hour biscuits-and-jams place. (Possibly English or Scottish?) And no liquor license.

We just heard from the folks at Empire Biscuit, which is what the space will be called.

"Just wanted to let you know that we'll be serving Southern-style biscuits and biscuit sandwiches 24/7 beginning (hopefully) early this summer. We will not be serving the Scottish cookie. (It's an honest mistake. Enough people have been misdirected by our name that we might find a recipe and bang out a batch of Empire Biscuits now and then.) It's true that we will not be serving alcohol."

Updated 3:30
DNAinfo posted a piece with the Empire Biscuit crew this afternoon... noting that the owners, Yonadav Tsuna, 22, and Jonathan Price, 33, met in 2009 while working as waiters at Bouley in Tribeca.

Previously on EV Grieve:
'No bar/restaurant' for former Habibi Lounge space
Posted by Grieve at 6:00 AM 6 comments:

Email ThisBlogThis!Share to TwitterShare to FacebookShare to Pinterest
Labels: Avenue A, biscuits and jam, Habibi Lounge

The former hookah bar here on Avenue A between 12th Street and 13th Street closed some time last November... for rent signs are up now... specifically — "no bar/restaurant." 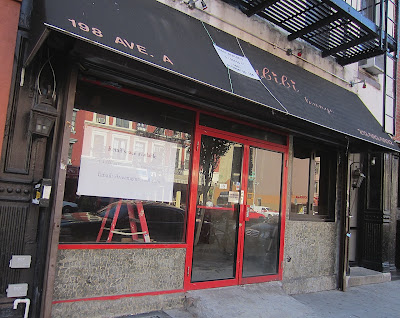 A call that should make some nightlife-fatigued neighbors of this stretch of Avenue A happy...
Posted by Grieve at 6:21 AM 4 comments:

Email ThisBlogThis!Share to TwitterShare to FacebookShare to Pinterest
Labels: Avenue A, Habibi Lounge

Neighbors of this hookah bar on Avenue A between 12th Street and 13th Street haven't seen the place open in several weeks... 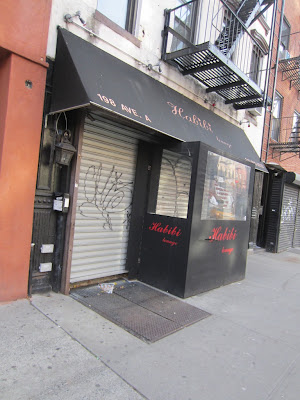 ...and trash is collecting inside the entryway... 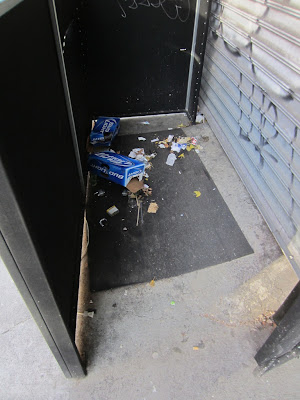 They still have an outgoing message on their answering machine... nothing to show that they have closed appears on the Habibi website...
Posted by Grieve at 6:24 AM 1 comment: