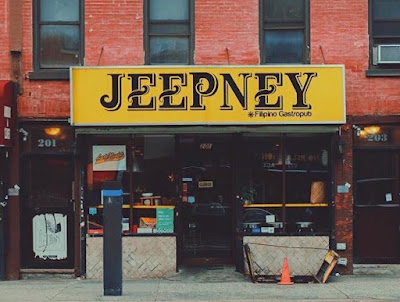 Jeepney, the 9-year-old Filipino gastropub at 201 First Ave., is closing on Sept. 25, Eater reports.
However, owner Nicole Ponseca said that this isn't the end of Jeepney — just at this location between 12th Street and 13th Street.
Per Eater:

The restaurateur hopes to partner with a restaurant group to open a more casual version of her pioneering restaurant in multiple cities, including the possibility of New York, similar to her expansion in the Wynwood neighborhood of Miami earlier this year.

Ponseca and executive chef Miguel Trinidad also operated Maharlika on First Avenue between Sixth Street and Seventh Street from 2011-2019. As Eater noted: "Both restaurants have been heralded for their takes on modern Filipino cooking, which helped introduce New York City to the Southeast Asian cuisine."
For its remaining time on First Avenue, Jeepney will be open for dinner from 5 to 11 p.m. on Fridays and Saturdays.
Image via Facebook
Posted by Grieve at 4:55 AM No comments: 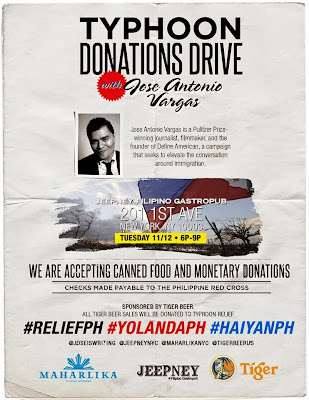 Jeepney, a self-described Filipino Gastropub, is at 201 First Ave. near East 12th Street.
Posted by Grieve at 9:53 AM 3 comments: 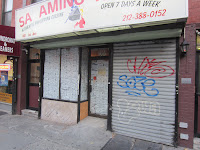 Sa Aming Nayon, the Filipino restaurant that opened here on First Avenue between 12th Street and 13th Street in June 2011, closed less than a year later this past spring...

Workers have been tooling around the space... several readers recently asked what was coming here... Time Out provided the answer several weeks ago. The place will be called Jeepney, from the people behind Maharlika down First Avenue at Seventh Street.

The young guns behind behind ... Maharlika will put a Pinoy twist on the gastropub this fall. To eat, find Southeast Asian-inflected plates, including a meat loaf with ground chorizo, duck-egg yolks and an heirloom-tomato gravy. Styled after the ubiquitous colorfully decorated WWII jeeps in the old country, called “jeepneys,” the 70-seat spot will be kitted out with hand-painted signs.