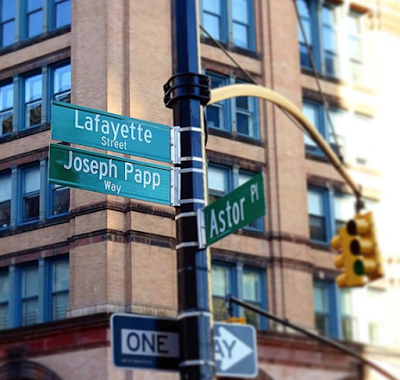 Here's more via the Village Alliance:

The co-naming honors the late founder of the Public Theater, which is celebrating the 50th anniversary of its landmark home on Lafayette Street. The sign was unveiled ... by Gail Papp, wife of the late Joe Papp, with remarks from The Public Theater Artistic Director Oskar Eustis, Commissioner of the Department of Cultural Affairs Tom Finkelpearl and District 2 City Councilwoman Rosie Mendez.

Our dear friends and neighbor, The Public Theater was founded in 1954, then known as the New York Shakespeare Festival. It opened the doors to its permanent home on Lafayette Street in October 1967 with the new musical Hair. Papp, was an East Village local and active member of the community.

Meanwhile, yesterday, officials unveiled Mary Spink Way on Avenue A and Second Street in honor of the late community activist.