A liquidation sale at La Sirena on 3rd Street 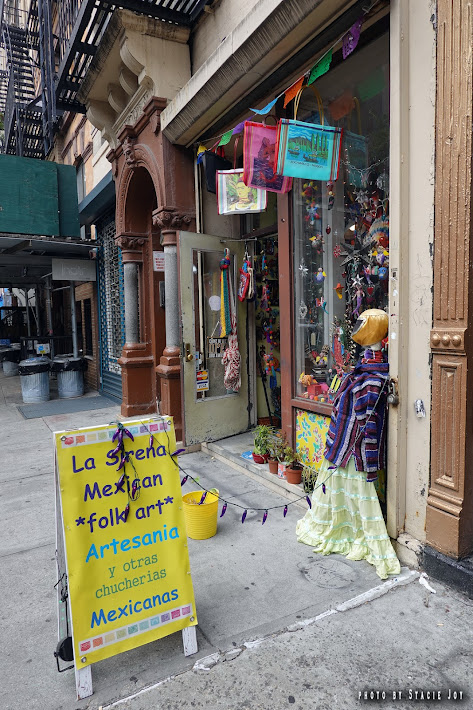 Photos by Stacie Joy
A liquidation sale continues at La Sirena, the longtime Mexican artisan shop at 27 E. Third St. between Second Avenue and the Bowery.
In an email about the in-shop-only sale, owner Dina Leor said: "Long story short, we have enough for four stores, and we want to empty. We'd rather you enjoy it than have it saved."
Here's more:

She said the liquidation runs through Aug. 31.
Asked on Instagram if she was closing the shop, she wrote: "First liquidating storage and then we'll see. I believe in miracles." 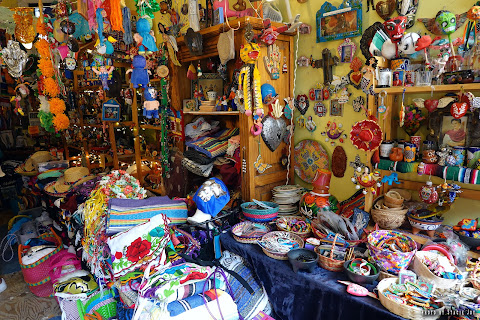 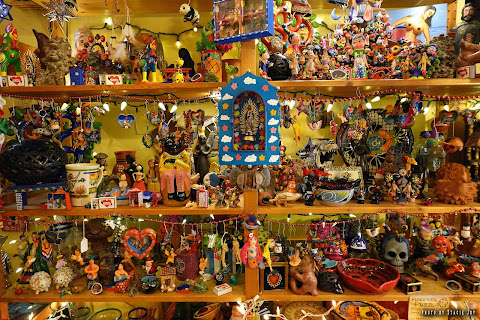 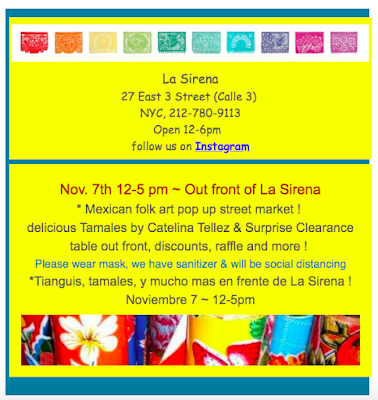 If you're out and about today... a festive afternoon is in store outside La Sirena, 27 E. Third St. between Second Avenue and the Bowery... where you'll find some sales and food ... and at 2:30, a Mexican folk dance show ...
And ICYMI: Roger Clark featured Dina Leor's shop on NY1 back on Oct. 19.
Posted by Grieve at 11:00 AM 1 comment: 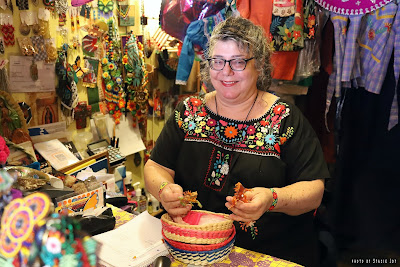 Dina Leor, owner of La Sirena, 27 E. Third St. between Second Avenue and the Bowery, is feeling emotional when I arrive to take her picture and talk to her about the challenges small businesses face during the coronavirus outbreak.

Dina recommends purchasing reusable bags for the shopping we’re doing right now — not to mention the recent plastic bag ban. Bags start at $3 (some perfect ones for little kids who may wish to have their own reusable shopping bags!) and go up to $35 for larger, oilskins versions. 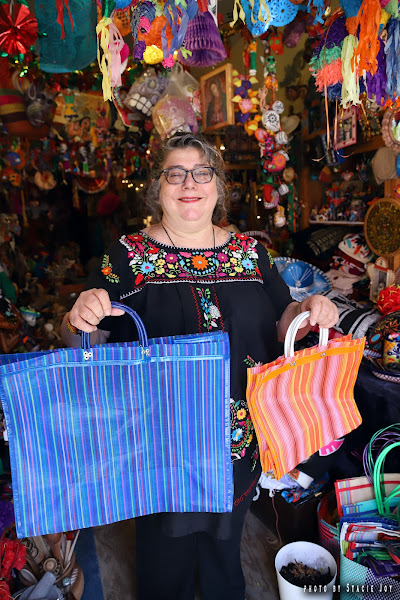 There are also $4 prayer candles, Mexican milagros (religious/folk charms for healing miracles), and colorful rosaries. During this challenging economic time, Dina is offering an East Village neighbors discount if you mention you live in the neighborhood.

You can also support the store via its online shop here. She is also taking phone order (212-780-9113). Dina hopes to remain open as long as possible. Hours are noon until 6 p.m. daily for now. 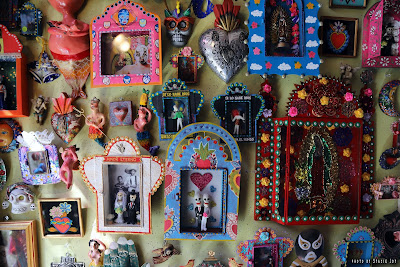 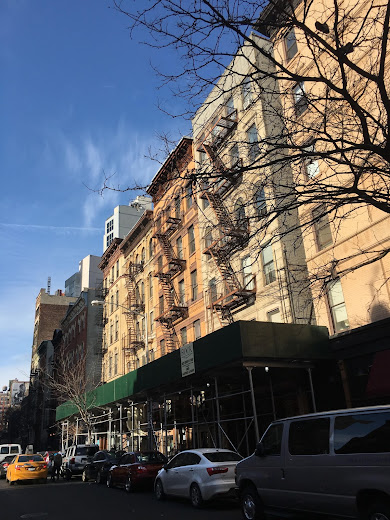 A sidewalk bridge bridge arrived yesterday outside a row of buildings on East Third Street — much to the dismay of Dina Leor.

Leor is the owner of La Sirena, the small Mexican folk-art store at 27 E. Third St. between Second Avenue and the Bowery. Business is challenging enough without a sidewalk bridge obscuring part of the block — especially two days before what is traditionally her busiest shopping weekend of the year.

"Yesterday, on the coldest day of the season — I really felt for the workers — building management had a sidewalk scaffolding put up out front with no notice to the commercial tenants," she said.

Leor called the management (the property is owned by the Cooper Square Mutual Housing Association) to find out what was happening. The response she received: "a few repairs and upkeep." She wondered why this couldn't wait until January.

And why wasn't there any notice?

"I would have been able to make a banner so people could know we are here and open on the busiest week of the year ... the week that gives us the financial boost to hopefully continue on with our evolving assemblage," said Leon, who has run La Sirena for 18 years. "I count on foot traffic. This is like the Grinch who stole La Sirena's Christmas." 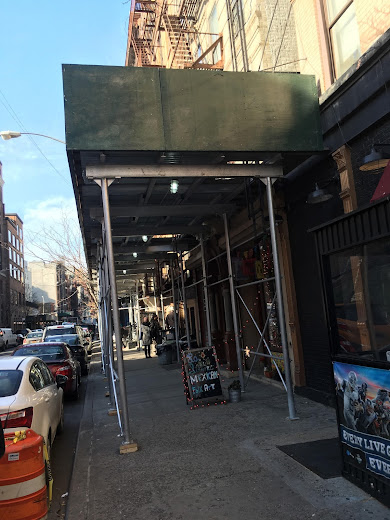 Previously on EV Grieve:
With the help of Rosie Mendez, La Sirena gets a new lease on East 3rd Street

Out and About in the East Village with Dina Leor
Posted by Grieve at 3:15 PM 11 comments:

With the help of Rosie Mendez, La Sirena gets a new lease on East 3rd Street 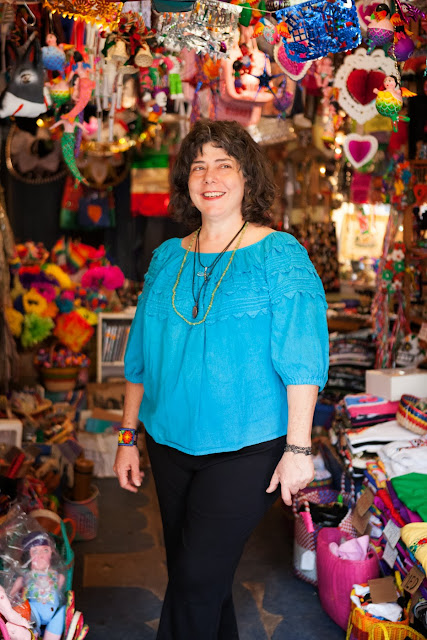 [Photo of Dina Leor from February by James Maher]

For the past three years, Dina Leor, the owner of La Sirena, the Mexican folk art shop on East Third Street, has been locked in challenging negotiations with her landlord, the Cooper Square Mutual Housing Association.

When the situation looked particularly dire about two months ago, she contacted Councilmember Rosie Mendez, who ultimately helped to mediate a new 5-year lease between the two sides.

What made her decide to fight for this space instead of moving somewhere else?

"I have been here almost 16 years and it was timing. I decided I wanted a balanced life, with time for the ongoing joy of La Sirena, my evolving assemblage of Mexican folk artists, living shrine and many other great things, family, friends — the simple adventures open time in a day can offer," Leor told us.

As for the lease negotiations, she said that she didn't understand what the landlord wanted.

"In the long negotiations the bottom line kept changing. Each person gave me a different answer," she said. "I could not agree on terms that I did not understand."

After receiving a court notice for eviction proceedings, she contacted Mendez's office. (Mendez has shopped at La Sirena.)

"Wish I had thought of her when all of this started almost three years ago, but I guess for whatever reason it happened this way," Leor said. "I didn't want to be taken to court. I have paid my rent on time every month since November 1998. Rosie Mendez mediated for me and I am so grateful to know that our Councilwoman helped save La Sirena."

And what's next for Leor and the shop at 27 E. Third St. between Second Avenue and the Bowery?

"Now I can move forward with what I love — representing, selling beautiful folk art crafted by amazing artists from many regions of Mexico," she said. "[The new lease] feels great. Monday is the start of Mexican Independence Day and La Sirena is celebrating a new chapter of independence."

Previously on EV Grieve:
Out and About in the East Village with Dina Leor
Posted by Grieve at 5:19 AM 16 comments: