Report: Another city plan in the works to address NYC's retail vacancy crisis 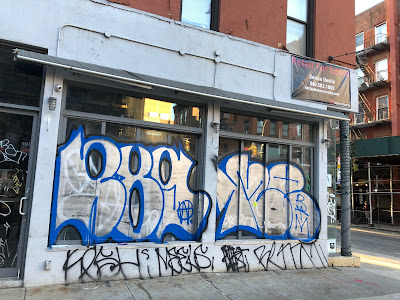 [The former Bar Virage on 2nd at 7th]

A story to watch... and a story discussed around here.

In an attempt to address the staggering number of empty storefronts across New York City, a Brooklyn City Council member [Stephen Levin] plans to introduce a landmark bill next week that would seek to regulate commercial rents.

Which brings up: Whatever happened to the Small Business Jobs Survival Act, which has been around since 1986 ... and after some high-profile support in November 2017, has languished in Council limbo for the past year...?
Posted by Grieve at 4:10 AM 6 comments: 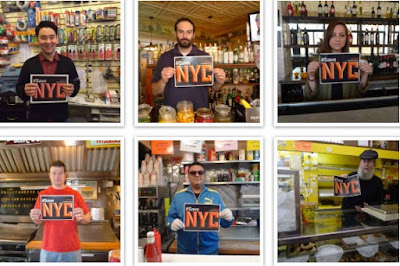 As you may have read, the Small Business Jobs Survival Act (SBJSA), which seeks to protect small businesses against massive rent hikes, had its public hearing before City Council on Monday.

Per Vanishing New York: The SBJSA gives existing commercial tenants several basic rights, including: 1. the right to renew the lease, 2. a minimum 10-year extension, and 3. equal rights to negotiate a fair rent, with third-party arbitration if an agreement between tenant and landlord cannot be reached.

In 1986, then-City Council member Ruth Messinger first introduced a version of SBJSA, though it never came to a vote. In 2009, the bill came up for discussion at the City Council committee level, but then-speaker Christine Quinn declined to bring it to a full vote, as Curbed noted.

Here's a rundown of coverage on the eight-hour hearing:

• What Can NYC Do To Stop Small Businesses From Dying Out? (Gothamist)

And Jeremiah Moss talks more about the SBJSA in this EVG podcast from the summer.
Posted by Grieve at 4:24 AM No comments:

Email ThisBlogThis!Share to TwitterShare to FacebookShare to Pinterest
Labels: SBJSA 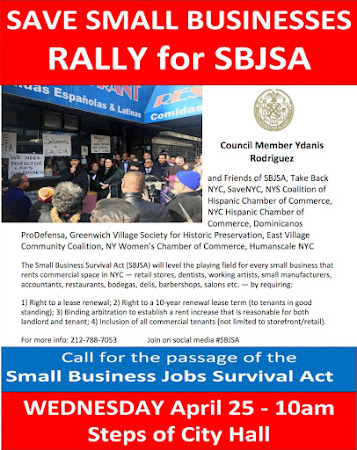 The Small Business Jobs Survival Act (SBJSA) is the best way we currently have to slow down the loss of our small businesses and the scourge of high-rent blight that is killing our streetscapes.

Recently, City Councilmember Ydanis Rodriquez reintroduced the SBJSA. Corey Johnson, the new speaker of the City Council, has pledged to give the bill a public hearing, and we hope it will go up for a vote and pass in full force.