Checking out the Vigilant Hotel: "Perfect for the bored with responsibilities of maintaining a traceable address" 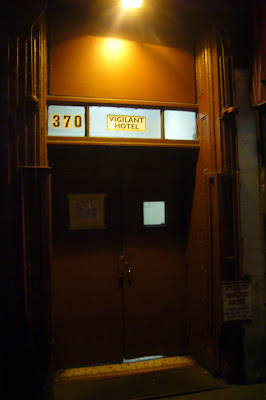 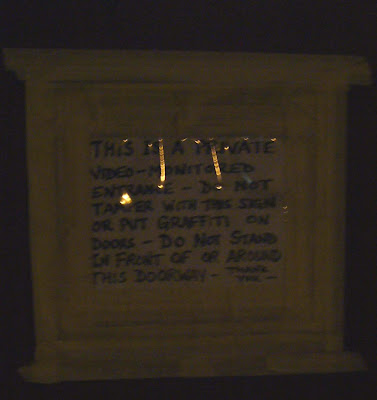 I've long been fascinated by the Vigilant Hotel at 370 Eighth Ave. between 28th Street and 29th Street. An old-fashioned flophouse continues to survive in this era of pricey real estate and swanky hotel developments? Miracle of miracles! 14to42 had this information from a 2003 post:

The Sartirano (sometimes spelled Sartirana) hotel business is even older, going back to 1888 with his first hotel at 116 Gansevoort St. in the West Village.

The name Vigilant Hotel, however, is not quite so old, and seems to date no earlier than 1916. The hotel is still here (as of August 2003) but to all appearances no longer operates as a hotel in the usual sense...

14to42 also also has links to two photos by Percy Loomis Sperr in the New York Public Library's Digital Collections. The first dated 1932 shows a side wall with "Rooms 25¢." The second dated 1938 shows a small sign over the sidewalk reading "Vigilant Hotel." 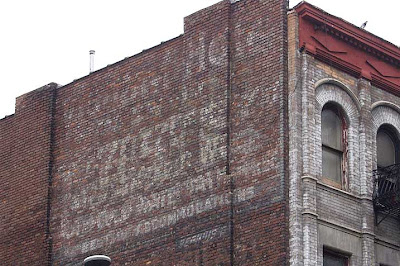 The reviews are mixed on Yahoo! Travel. Someone who has never stayed there gave it five stars while someone who did gave it one star. What was so wrong with it that it deserved that?

OK, Felix Ungar...we'll getcha a suite at The Carlyle!

Anyway, here's what the place looks like on the inside: 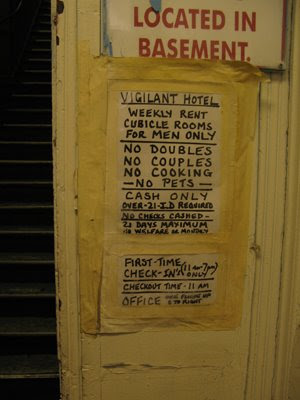 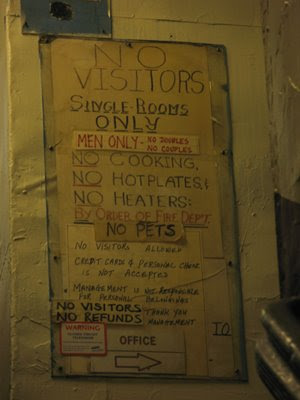 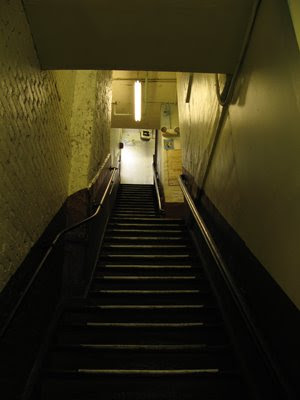 (These three photos via here.)

Finally, here's review of the hotel at Not for Tourists by Dave Crish:

A scar, even upon the pissed on pave of Chelsea's north edge. I relate, here, of history's Vigilant. Built some hundred years ago of resilient brick, at present resembling ash. Not the sort of amenitied lodge one peruses on vacation. Piped of, but, three befouled showers, a pair of sinks, and toilettes of excreta. Succinctly, an inn of cells petit rented to gents of varied feather—all poor for whatever reason, breathing the airs of next step below homelessness. $125 per seven days. No credit, no checks, no euros, cartons maybe—of Marlboros. Never gleeful, rarely tended proud asylum sans musique. Fine abode for a bit of drifting or a brief disappearance. In sum, perfect for the bored with responsibilities of maintaining a traceable address. Foam pad, gray, oft cavorted 'pon by bloodsucking mites. Not a lash of social space but narrow hallways. Sphere of little social grace a tincture schizo of few heads cracked—a few murderers, few blooming, and even fewer handsome. Maybe a master once and then. Never a fellow un-weathered. Indeed, the Vigilant Hotel. For the times when desires discordant means and the bench not an option.

Related on EV Grieve:
Elk in the City
Posted by Grieve at 7:00 AM 18 comments: