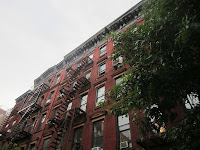 The Daily News has an update on Uta Winkler's ongoing legal fight with Kushner Cos. to clean up a black mold infestation in her Ninth Street apartment. (DNAinfo previously reported on her legal battle in December 2016.)

Winkler, a rent-stabilized tenant, said in court papers that her kitchen was destroyed several days before Thanksgiving in 2013 by construction workers renovating an unoccupied unit above her apartment.

During the past year she has been locked in a legal fight in Manhattan housing court to get [Jared] Kushner’s real estate firm, Kushner Cos., to remediate the mold.

Even though an inspector she hired detected the spores in March, Winkler said she had to go to court several times before Kushner Cos. agreed to conduct its own mold test in the fall.

It took more court dates to get Kushner to agree to pick a remediator who will actually get rid of the mold — which has been shown to cause respiratory problems and to inflame allergies.

It’s still unclear when the remediator will actually make the fix, Winkler said.

“It’s harassment to get me out,” she said. Kushner Cos. did not respond to requests for comment.

Winkler had to endure more mayhem when she came home in late 2013 to find that a construction worker carrying dirty water and debris on the floor above hers had crashed through her bedroom ceiling, landing on her bed, court document said.

The fall destroyed her bed and other furniture, but Kushner's management firm, Westminster, refused to reimburse her for the damage or even return her calls, court papers said.

Without a response, Winkler withheld her monthly rent, which reportedly prompted Kushner to sue her for the unpaid rent in 2015 in Manhattan Housing Court. DNAinfo previously reported that the company also sued tenants in two other units, include new market-rate residents, in the building for also withholding rent because of the disruptions from construction. (Those two other tenants then each filed counter-suits against Kushner.)

Winkler's "suffering with Kushner" reportedly started shortly after Kushner bought the five-building parcel on Ninth Street between First Avenue and Second Avenue in 2013.

The Kushner Cos. now own some 30-plus apartment buildings in the East Village

Tenants in several of these buildings have accused Kushner Cos. in court records of trying to drive them out through harassment, construction and dilapidated conditions.

State records also show that, in the past five years, the agency that oversees rent-stabilized and rent-controlled apartments has penalized Kushner Cos. in at least 11 instances over diminished services or poor conditions at one of its buildings in the city.

In those cases, the state Division of Housing and Community Renewal has ordered the monthly rent reduced for one or multiple rent-regulated units in the building until the problems were fixed.

Now even the lawyers Kushner worked with are taking the company to court. Several weeks ago, the News reported that Cornicello, Tendler & Baumel-Cornicello, a law firm that represented Kushner Cos. in dozens of eviction and housing court cases, is now suing Kushner for unpaid bills totaling more than $100,000.

As for Winkler: "For four years, they’re dragging me around, wasting money. I’m paying my lawyer constantly. It just makes no sense and it is so obnoxious."