As mentioned on Friday, the First-Ever Snuggie Pub Crawl took place Saturday. It included stops in the East Village. I was unable to witness, but I sent the rather reluctant Intern of EV Grieve to tail the group. He did so for roughly 20 seconds. But he did manage one photo. 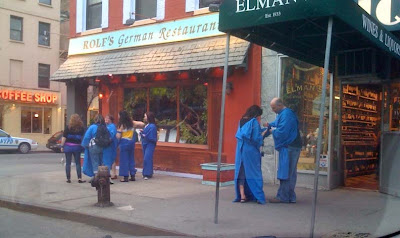 Meanwhile, lvv made a good point in the post of Friday:

lvv said...
I think the most ridiculous part of this crawl may not be the Snuggies, but the sequence of bars.

Why, after SideBar, would one go to two places a few aves east and streets south, only to return to Belmont, which is literally across the street from SideBar? Aren't bar crawls supposed to be sort of directionally sense-making? Are they trying to make people barf?

These are rhetorical questions of course. 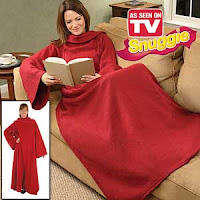 What: A pub crawl in New York, New York wearing Snuggies
You must be 21 or older to attend

BYO-Snuggie Bring your own Snuggie:
Blankets with sleeves can be purchased at a number of retail stores.