Back in May, we did an interview with Marc H. Miller, the founder and director of Ephemera Press. He had launched 98 Bowery: 1969-1989 — View From the Top Floor.

Marc recently wrote to me about a new section on the 98 Bowery site: Punk Art. As he notes at 98 Bowery:

As Bettie Ringma and I watched various musicians at CBGB successfully launched under the rubric of Punk Rock, it occurred to us that we might do the same for the visual artists who were part of the extended scene. It was partly tongue-in-cheek, partly hype, but secretly we actually believed we were presenting something new and important. The year was 1978 and the show we mounted with Alice Denney at the Washington Project for the Arts in Washington DC has gone down in history as the world's first Punk Art exhibition ... We repeated the Punk Art show twice: first as a one night, multimedia event at the School of Visual Arts in New York (November 1978) and then in a small exhibition at Art Something in Amsterdam, Holland (June 1979).

Miller has posted the long out-of-print Punk Art catalogue, which features new pictures and video. He also rewrote the introductions, adding stories connected to the exhibition, and updates on the artists.

My favorite section is on Punk Magazine. Or maybe the section on Alan Suicide and Art-Rite magazine. Or...

Here are the covers to the first three issues of Punk... 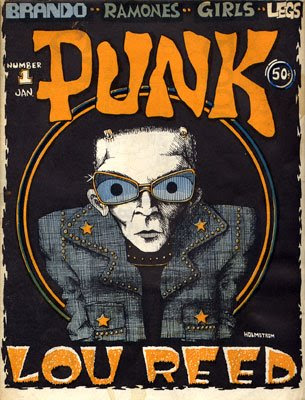 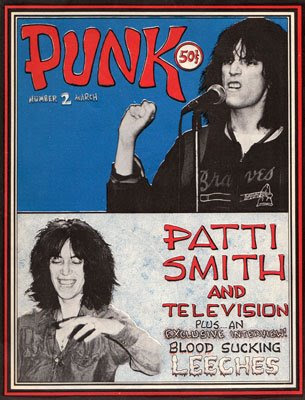 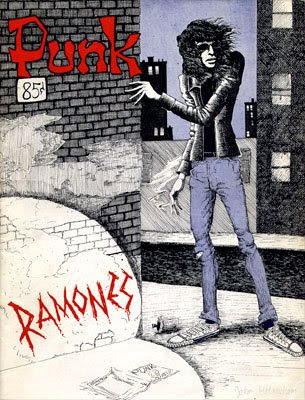 ...and an ad featuring Debbie Harry (photographed by Chris Stein) 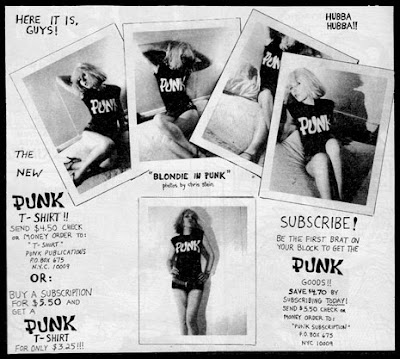 Anyway, you can go here and see it all for yourself.
Posted by Grieve at 7:00 AM

Oh dear. Now Varvatos or some other enterprising leech is going to produce replicas of that shirt -- sold for $325, not $3.25. Thanks, Grieve!

Ugh! I didn't even think about that, Bryan!

NYCD: I double your hubba hubba.

That whole piece is great - nice to see Pat Place (Contortions/Bush Tetras) included there - and I finally saw a t-shirt that I WOULD pay hundreds of $ for - that Johnny Blitz benefit t-shirt is amazing.

Outstanding! Maybe I'll repost this if I can get around to posting something this week!

Yes, Debbie was/is a wonderful woman. I wish I had something scandalous to say about her so I could make money from the tabloids. Well, not really. Anyhow, She's a fantastic woman, much cooler than anyone suspects.
In other news, I have to admit that Marc Miller actually created the idea of a "Punk Art Movement." He created the concept and then made it happen at that WPA show. It was kind of a flop, like all of punk rock in the 1970s. The weird thing was how Marc then made it come alive in the 1980s. He never gave up.
I remember doing those shows at SVA, where Keith Haring an Kenny Sharf were probably in the audience. Even if they were't, the "CBGB as art" thing that we projected was promoted by Marc as a reality. So he deserves a place in punk rock history. I haven't seen it yet.