Going for a ride with Fran Lebowitz 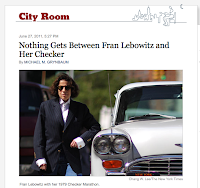 Over at the Times this evening, there's an interview with Fran Lebowitz, who owns (and drives!) a 1979 Checker Marathon, "which she keeps in an expensive garage in the East Village." Reporter Michael M. Grynbaum tagged along for a ride. An excerpt from the Q-and-A:

What about those pedestrian plazas that the mayor installed in Times Square?

Closing down the streets the way he did — you know, the lawn chairs in Times Square and that kind of stuff? It’s grotesquely suburban. O.K.? It makes New York seem like a failed Rust Belt city, where they are trying to, you know, bring people downtown to a mall where no one shops because the factory closed. It is the opposite of an urban environment.

Thanks to EV Grieve reader Mykola (Mick) Dementiuk for the link ...
Posted by Grieve at 7:58 PM

Ha! - trust Fran Lebowitz to put it so well.

Right, because tearing up your cities for the convenience of cars while displacing pedestrians is the exact opposite of what all those middle American cities do. Whatever you say. The places where the city centers are dead after working hours because everyone's driven back to their suburban homes on those wonderfully convenient multilane highways that replaced the lower class neighborhoods, and it's pointless to walk anywhere because downtown is just the space between parking garages? That's what we need more of! I'd love to live there!

(Shorter: she's talking out of her ass. Pedestrian space is what real cities have, it's the Rust Belt where they run everything for drivers.)

"New York is a city of walkers, not sitters; a city of motion, not repose. In Times Square, tourists should be looking at New York, caught up in the swarm of activity and lights and commerce and theater; instead, New Yorkers find themselves looking at the tourists, a cordoned-off display of the temporarily sedentary. "

And as long as you don't own a coal company you aren't hurting the environment. So, fire up that SUV, never mind recycling, and stop bringing that dopey cloth bag to the market 'cause it's all just a waste of time. Agreed Mr. Bensam, she is talking out of her ass.

"which she keeps in an expensive garage in the East Village."

i would kill to take a ride with Fran in her Checker.

While I personally dislike the pedestrian walkways, she needs to pull her head out of her ass. I grew up in a rust belt city, and the memorable thing is emptiness. Those places always looked like drab, dreary ghost towns with no color and no people. You know, exactly the opposite of Times Square.

I wonder how many miles to the gallon she gets... maybe 3 or 4? Sorry, but Fran has jumped the shark.

i f*cking love fran lebowitz so much. god, too bad we can't get her for mayor!

fran is a ditz with little feeling for reality...

Her comments on second hand cigarette smoke are
enough to show her idiocy...

The Times Square plaza isn't suburban; it's just unattractive. Either way, I've always supported Lebowitz's contention that you have the same chance of winning the lottery whether you play it or not.

Jeremiah I've been thinking the same thing ever since I saw that movie about her and saw her car. If I ever saw it, I would not be able to resist jumping in front of it, just to hear what she had to say. Agree or disagree, she is a real character.