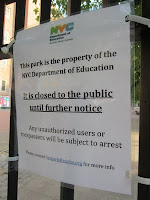 As we first reported, officials from the East Side Community High School on East 12th Street between Avenue A and First Avenue closed Open Road Park last week.

School officials held a meeting to discuss the Open Road Park's future yesterday afternoon at 4. EV Grieve reader dwg was there, and filed this report:

Mark Federman, the principal of the school, spoke to a handful residents and a group of skaters. A woman from Open Road was there, the guy who runs skateboard classes, assistant principal, custodian and a rep from Rosie Mendez's office.

Basically the park was closed because of increasing incidents of trash and debris, smoking cigarettes, marijuana — some selling of marijuana ... and skaters and others in the park before or after hours and trouble with people not respecting set school or other programmed activities.

Federman said the closing is temporary ... to revaluate the hours and increase supervision and come up with defined hours and rules for the park. He said things got a little lax and they need to improve on that.

Open Roads is going to post new signs soon with park hours, rules and regulations ... and then the park will open again. No date was given but sounded like a week or so.

Everyone got a chance to speak and voice concerns. Federman is concerned and aware and wants to keep it open, but run a little tighter program.

The Local East Village has a meeting recap here.

Why the Open Road Park is closed
Posted by Grieve at 6:42 AM