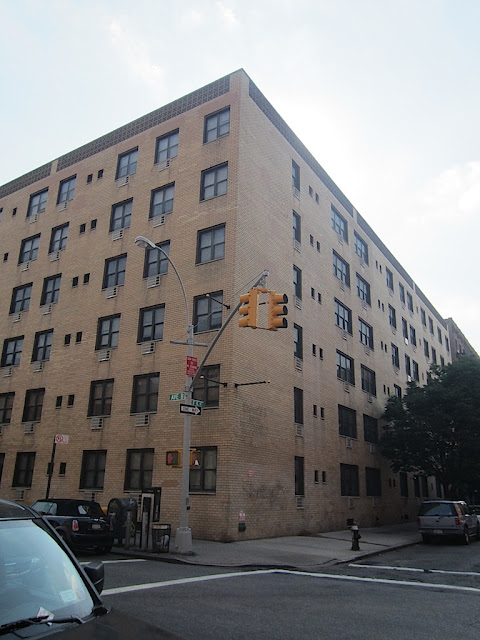 Work has started on converting the former Cabrini Nursing Center for Nursing and Rehabilitation into residential apartments. As previously reported here, Cabrini, who had been renting the space since opening in 1992 on East Fifth Street at Avenue B, turned over the building to its new owner, developer Ben Shaoul, on June 30.

A chute arrived on the scene late last week... 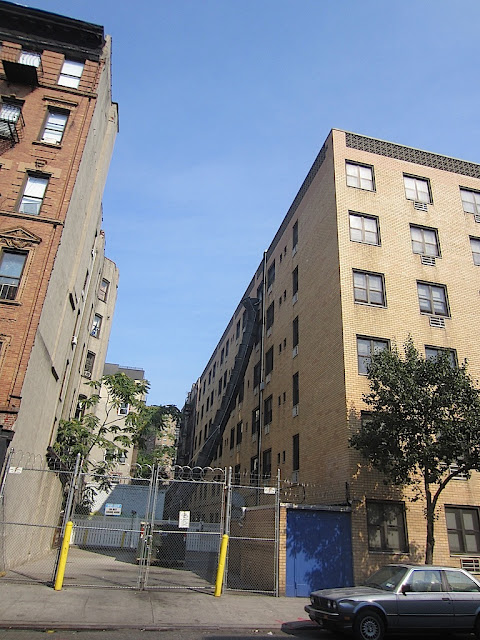 And the gut renovations were going strong yesterday... 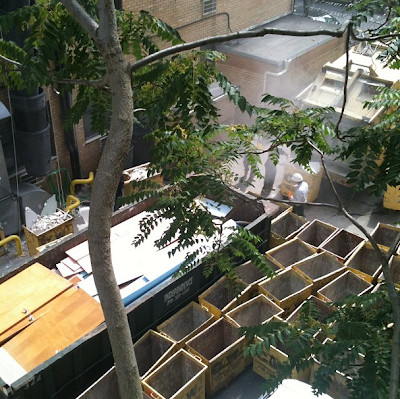 According to permits on file with the DOB, the first floor of the remodeled space will contain the lobby, six apartments and retail. Floors two through six will house 15 apartments on each floor. (We previously heard that the building would contain one-bedroom rentals.) The basement is earmarked "residential amenities."

And, despite a neighborhood rumor, there aren't any plans on file for a pool in the building.

Previously on EV Grieve:
Cabrini Center patients out by the end of today; closes for good June 30

Claim: Ben Shaoul is the new owner of Cabrini nursing home, will convert to condos

Q-and-A with Patricia Krasnausky, president and CEO of Cabrini Eldercare
Posted by Grieve at 6:50 AM

They better do this work in the most responsible way possible in FULL compliance with the law. Or their neighbor Glamma is gonna 311 and the DOB every single mo'f*ckin day. All day. Every day.

You got that Shaoul?

ps - you will rot an eternity for what your did to these fine senior citizens of the East Village - the Greatest Generation, chucked to the curb!!! Stop raping and pillaging our neighborhood you monster vulture!!!

While I'm not a fan of Ben's, the post script of comment #1 makes no sense whatsoever. If Shaoul didn't buy the building, do you think that Cabrini (read: BANKRUPT) would have not sold it otherwise to another developer? If you have issue with the building's vacature, take it up with Cabrini.

Not a Ben fan either. However, it is interesting to see that no one is blaming the family trust that owned the building and sold it from under Cabrini. Perhaps some rage about the lack of compassion for "these fine senior citizens" be directed toward that family trust. Are they less heartless because they are based in another city?

Also, as it has been reported on this website and in other local publications, Ben tried to sell the building to a for-profit operator to continue a nursing home operation at this site.

From what I understand the family trust did everything they could to try to keep this operating as a nursing home. The city did nothing to help. Only Rosie Mendez giave a sh*t. Ben Shaoul is a vulture, this man would not do anything for any reason other than sheer profit. Is that not entirely evident from his record??

There's so much death in that building, I don't know how anyone will get a single night's sleep.

But Glamma, all the family had to do was not sell it to keep it running.

From what I've understood, Cabrini was given an offer to buy, but didn't have money to buy it outright. Could the state/local government or some other financial entity have assisted with that? Maybe, I suppose, I don't know.

I have heard a thing or two about this center, and as long as no one suffers anymore, it can be whatever it wants. But it's the family trust that is to blame for what has happened to the building...