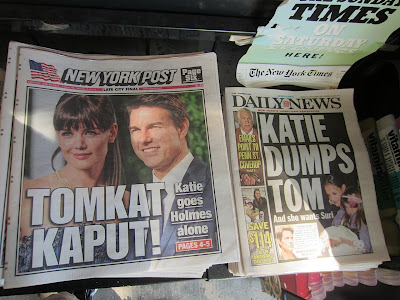 [Outside Gem Spa Saturday, where the dailies may have sold out really quickly]

East Village residents spent the weekend trying to come to terms with the shocking news that power couple Tom Cruise and Katie Holmes were calling it quits. The Hollywood A-listers were often seen mingling with residents near the home that they owned in the American Felt Building on East 13th Street near Fourth Avenue.

"First Bret Easton Ellis, now this," said one crestfallen Felt Building resident who asked not to be identified. "I feel like my whole property value just plummeted a good six figures."

Given the impending split, divorce experts said that it was unlikely that Holmes would ever set foot in the American Felt Building again as it has been a long-time property of Mr. Cruise dating back to his whirlwind romance with Mimi Rogers.

Down the street at Everyman Espresso, where Holmes was seen at least once, fans tried to come to grips with the fact that they may never have the chance to be in the same cafe as the starlet and her security guards. 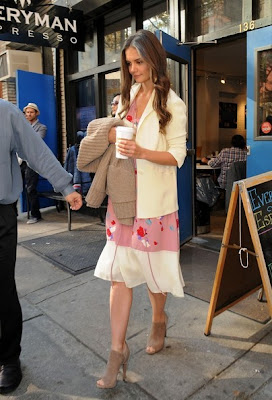 "The East Village is now officially dead," declared Spencer Brighton, a 22-year-old playwright who had been working on an off-Broadway musical adaptation of "Dawson's Creek" that he hoped to present to the former Joey Potter. "At this point I might as well just go ahead and move to Brooklyn Heights. Or wherever it is that Michelle Williams lives."

Everyman management refused to comment on rumors that the space will be renamed either Holmes Is Where the Heart Is or Katie Kafe.

However, dayshift manager David Jourgenson did say that he had been approached about showing several screenings of "Teaching Mrs. Tingle" and "Disturbing Behavior" as part of an upcoming Breakup Memorial.

Holmes was no stranger to the neighborhood. For instance, she dined at Northern Sea Food Co. on East 12th Street once.

She also starred in "Pieces of April" in 2003, a darkly comic movie set on Pitt Street on the Lower East Side. During the filming, Holmes often stayed in character as April Burns and hung out at Max Fish and the Parkside.

"She actually came back to my place on Clinton Street for an after hours," said one LES nightlife regular. "None of us had any idea who she was. We thought it was weird that she was carrying a turkey, which turned out to be a prop from the film."

The nightlife regular continued, chuckling at the memories he was recalling.

"She was really laidback and didn't freak when my nose started bleeding from the bad Coke."

Outside St. Mark's Church in-the-Bowery late Saturday night, a group of Holmes fans gathered not to mourn but celebrate. "She was the reason that I moved to the East Village," said Jane Kohl, who was gently strumming an acoustic version of Paula Cole's "I Don't Want to Wait." Others in the guitar circle nodded and fought back tears as Kohl softly uttered:

However, not every local was saddened by the news.

"She's from OHIO," chimed in a large man at another table wearing a "Revis Island" T-shirt. "Toledo no less."

Regardless of where she's from, to the fans who created a memorial outside the American Felt Building, Holmes was one of us. 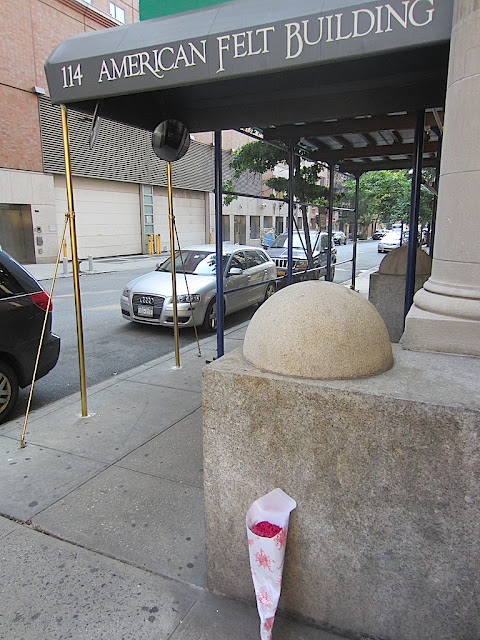 "Aside from this fairy-tale romance ending," said Jamie McCluskey, shaking his or her head and taking in the scene in front of him or her on East 13th Street, "I'm afraid I'll never see her again.

Thank you for your excellent coverage of what will most certainly shape up to be the East Village Story of the Summer. I had been relying on TMZ for updates, but I will now turn to EVGrieve.com for coverage. Will you be posting TomKat news daily or hourly? ;)

Others may say it, but EVG is truly fair and balanced. Great coverage of an important story!

Truly inspired, Grieve. The Onion should pick this up, it's hilarious.

Our long national nightmare is over. I do hope you'll break into Grieve 24-7 Team TomKat coverage for occasional Sevigny updates. What if someone changes the wallpaper?

(IN ALL SERIOUSNESS, Pieces of April was a pretty good movie.)

I think it was the W magazine photo spread that was the final straw that broke the already frail starlet's back. You can't UN-see something like that. It's horrifying, and it's images are now burned into my retinas for the rest of my days. God help anyone who had the misfortune of seeing it. There should be a support group.

I can't imagine the horror Katie witnessed day in and day out being married to THAT. THAT getting out of the shower... THAT scrambling eggs... THAT flossing his teeth. Oh, the horror....

Thanks for this article.

As the East Village turns on the days of the lives of all the children of the young and the restless, the bold and the beautiful, in the falcon crest of the guiding light of EV Grieve.

A new soap opera from Everyman management and American Felt building -- the series revolves around the lives of young adults who moved to the EV to pursue their dreams of being near or becoming like TomKat, navigating the EV in their twenties, "one fro-yo/cupcake/woooo! at a time, who hope and aspire to be the voice of their EV generation, or an EV generation.

This may be important but more importantly The Stage is closed for a well deserved vacation through this week. I'd like to take Kate there for the meatloaf.

I honestly can not fathom why you put such effort into this. Sorry.

oh man, this is hilarious..i gotta link on the fb..
WHY DID THIS HAVE TO HAPPEN?

That was fucking hilarious. My hangover feels better now, Thank you.

katie holmes seems like a nice person. she walks around brooklyn with friends and no security guards all the time.

I must admit that i find myself in the deepest depths of confusion and despair, for if a superpower like the Tom, Kate and Suri triumvirate, with the full endorsement and backing of the empirical wisdom of the church of scientology, cannot produce a sound marriage than what chance do we mere mortals have of ever connecting in a meaningful way at all? After poor Kate is relegated to Elba or Connecticut, and Tom sheds his fleshy human shell, and Tom and the half god/half mortal Suri escape in their pod this Bonfire of the Vanities to bestow their blessings on a new planet, will their only Kryptonite be old film footage? To be continued....

I'm organising a Dawson's Creek marathon. Who's in?