After 16 years, Puck Fair, the Irish pub on Lafayette just south of Houston, will close for good on March 27, Gothamist reported.

Puck Fair and the BP station next door will be demolished to make way for a 7-story boutique office building that will look like... 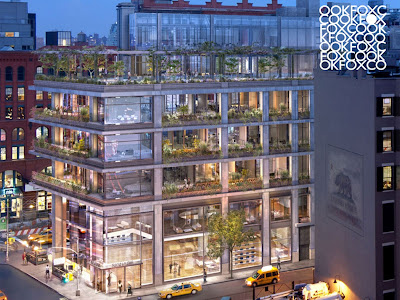 [Rendering by Cookfox via Crain's]

The farewell party at Puck Fair is on March 25. And the details via Facebook:

Well folks it's with great sorrow that I must break the news that Puck Fair must close it's doors at the end of this month. After 16 years of operation the powers that be are making way for a new development on our corner of Lafayette street.

So come join us between now and then but especially on Friday the 25th of March when we will host our farewell party with drink specials, live music and all the usual things you've grown to expect from us at Puck.

The BP station has yet to announce its closing date.

Report: Boutique office building on East Houston and Lafayette at BP site a go
Posted by Grieve at 4:00 AM

Isn't this the pub that David Bowie frequented? He's gone two months and now his neighborhood hangout will be gone also. History is erased fast in the naked city.

Once again, the SMALL BUSINESS JOBS SURVIVAL ACT would have saved this bar by preventing unfair short term leases. And still City Council is denying democracy by prohibiting a vote on this bill.

More glass that is visually out of step with the surrounding environment.

Why would they allow a vote? The Council is there to protect the interests of those who can pay for access and they do an EXCELLENT job of protecting those interests. They are there to ensure risk is generalized to the population, but the profit is specified.

Tale of two Cities bs by the Mayors Office. Meanwhile, the City Small Businesses Services is a disservice to any small business in NYC, and the local Business Improvement District does nothing.