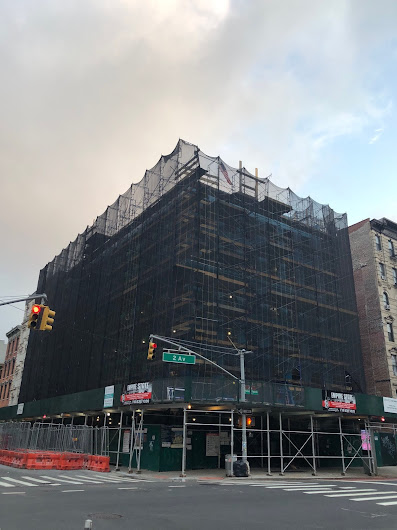 The trial is set to start today (per ABC 7) for Maria Hrynenko and two others for their role in the gas explosion on March 26, 2015, that killed two men, Nicholas Figueroa and Moises Locón, and leveled three buildings — 119, 121 and 123 Second Ave.

The trial could last as long as three months in Manhattan Supreme Court, the Daily News reported last week.

As the News reported last week, the defense is expected to argue that tampering was not the root cause of the explosion. "I think the DA is going to try and show that there were all these irregularities regarding the gas piping," said Kukic’s lawyer Marc Agnifilo. "None of that is what caused the gas to leak."

Nexus Building Development Group paid $9.15 million for the empty lots at No. 119 and No. 121 that Hrynenko owned. As the top photo shows, workers have been quickly erecting the Morris Adjmi-designed building at 119 Second Ave. (aka 45 E. Seventh St.) — that will feature 21 condo units and ground-floor retail. The new building will include a commemorative plaque that honors Figueroa and Locón.

The Times has a trial preview today:

A lawyer for Ms. Hrynenko did not respond to a request for comment.

Ms. Hrynenko did not tell detectives about the illegal gas line, prosecutors said, and she shredded nine garbage bags full of documents pertaining to her real estate business.

But legal experts and defense lawyers say that it is difficult to convince a jury that someone is guilty of manslaughter in cases where slipshod construction work has led to deaths.

Jury selection starts for defendants in 2nd Avenue gas explosion that killed 2 men
Posted by Grieve at 4:30 AM

I hope the prosecution is successful and these three defendants spend many years in prison.

Does anyone know where the trial is taking place (address, courtroom?) For those of us who might want to drop in to (silently) support the prosecution. Thanks.

They wont be convicted. Sorry.

Justice delayed is justice denied - and the defendants' lawyers are very, very good at getting delays. That said, I hope they get the book thrown at them.

Meanwhile, those two young men lost their lives b/c of the carelessness/heedlessness of others, and no courtroom outcome will bring them back.

They did something dangerous and illegal that killed people purely for profit, but the prosecution has to prove they did it knowing it was dangerous and reckless? Seriously? What a joke

For anyone interested in seeing how justice actually does or does not work, the court info is here:

The case details are available online at WebCrims:

Maria Hrynenko’s top charges include 2 counts of manslaughter and 2 counts of criminally negligent homicide, one for each death. She has 18 charges and 104 counts against her in all, mostly felonies, the rest misdemeanors just in case the jury wants to go easy on her.

You dont know what they did or didnt do. Intent matters greatly. If they were otherwise maintaining the building, renting out apts etc you cant prove intent.Thats why she has manslaughter and criminally negligent homocide charges. Did the DA overcharge due to publicity and politics? She has to be proven guilty in court. Stop the lynch mob mentality.

While I won’t handicap the odds of conviction, the notion that because the landlord put tenants in the building, she couldn’t possibly have the requisite intent to expose anyone to danger is laughable. That’s what reckless endangerment is; you know you are exposing people to dangerous risk, and you do so anyway, usually for profit. That’s why it’s criminal. Greedy assholes do greedy asshole things all the time.

@Anon. 1:38 - Seriously? I am neither a plumber nor a landlord, but even I know that when you screw with gas lines you run the risk of a serious and possibly deadly outcome. Who cares if they were "otherwise maintaining the building, renting out apts etc"? That's like saying Mussolini was great because he made the trains run on time, and Hitler was simply a misunderstood painter who brought the world the VW Bug and just wanted to give the German people some more Lebensraum. SMH.

It might be hard to prove that she knew her actions could lead to someone's death. After all, her son was involved in the repairs, and presumably she did not knowingly put his life at risk.

I'm not a Hrynenko supporter, but she lost a son. Let the punishment fit the crime.

Three mothers lost their sons. Hrynenko was responsible for two of those deaths. Yes let the punishment fit the crime.