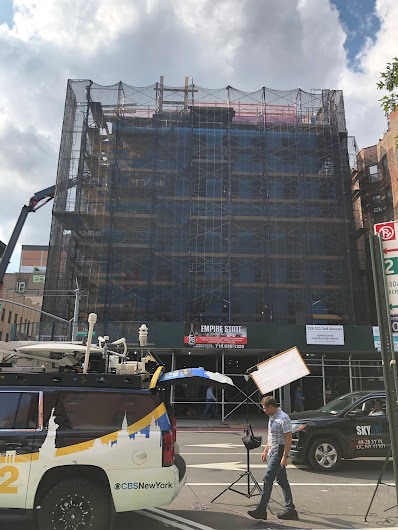 Opening statements were made during Day 1 of the trial yesterday of landlord Maria Hrynenko, contractor Dilber Kukic and unlicensed plumber Jerry Ioannidis in Manhattan Supreme Court on Centre Street.

The three have been charged with manslaughter and criminally negligent homicide for the March 2015 explosion at 121 Second Ave. that killed two men and injured nearly two dozen people. They illegally tampered with the gas line at No. 121, where the restaurant Sushi Park was the retail tenant, then failed to warn those in the building before the blast, according to the Manhattan District Attorney's office.

“There was a virtual bomb lurking beneath,” Assistant District Attorney Randolph Clarke Jr. told a jury during opening statements.

“All it took was 23 minutes to cause all this damage and destruction,” Mr. Clarke, the prosecutor, told the jury. He said the defendants’ actions were motivated by financial greed and a desire to rent the newly renovated apartments.

Lawyers for the defendants said their clients weren’t responsible for the blast.

“This is a tragic accident,” said Michael Burke, a lawyer for Ms. Hrynenko. He said his client was an inexperienced landlord who tried to do things right and hire the right people.

Marc Agnifilo, a lawyer for Mr. Kukic, said evidence suggested the fire could have started in the kitchen of Sushi Park and not in the adjacent basement. He said there wasn’t enough evidence to prove prosecutors’ theory of the case.

A lawyer for Mr. Ioannidis, Roger Blank, told the jury that Sushi Park had a history of gas issues in its kitchen.

Nixon Figueroa, the father of Nicholas Figueroa, one of two men who died that March 26, 2015, took the stand. The Post has his emotional testimony:

[He] recalled how his wife waited nearly three agonizing days after the March 26, 2015, blast to learn that the body of their 23-year-old son was recovered from the rubble.

“That’s the day I died,” said the 56-year-old, choking up. “I have a picture of my son’s face in the moment when he’s flying through the air and the anguish that he had and the pain when he knew he wasn’t coming back…it broke my heart.”

You can also read recaps at the Daily News and The Daily Mail.

Jury selection starts for defendants in 2nd Avenue gas explosion that killed 2 men
Posted by Grieve at 4:45 AM

It's been four years but it's still heartbreaking. I can't even walk on that block anymore. Justice must prevail.

Why in the fuck has this taken over four years to go to trial?

In the comments on a NYT article on the subject. one person said that not only should the landlord do time but she should also lose her property & be permanently barred from being a landlord. I agree.