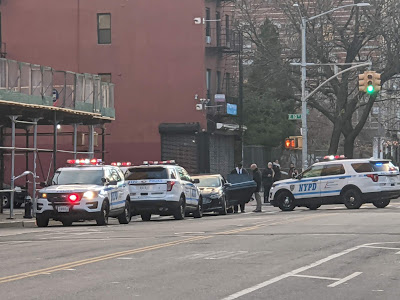 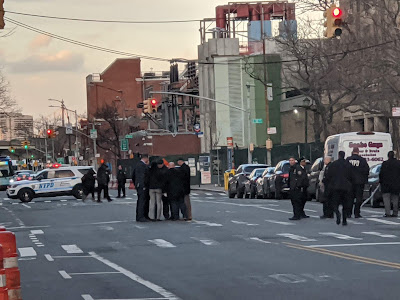 The Citizen app reports that two people were shot with a pellet gun... and that police were searching for a suspect. There isn't much more information at the moment. Will update when more details are available. (An ABC-7 news truck was spotted on the scene.)

The Post reports that one man was shot... and that police arrested one man. And from the article: "Police said the shooter was armed with either a BB gun or a low-caliber pistol."

According to the MTA, M9 and M14D buses are being rerouted ...

M9 and M14D-SBS buses are detoured because of NYPD Activity between 10 St and 12 St at Avenue C. Details at https://t.co/4PI10QaRnr

Christopher J. Ryan shared these photos from the scene tonight... there was still a large NYPD presence, suggesting that the shooting may have involved more than a pellet gun ... 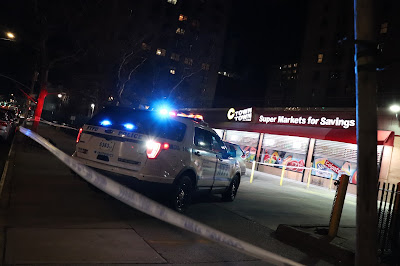 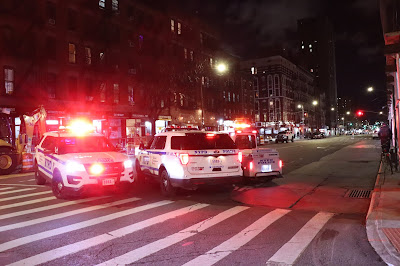 As for the timeline, the first report of the shooting came in around 3:45 p.m. ... Avenue C between 10th Street and 13th Street was on lockdown, per Ryan, until 9:38 p.m., when the NYPD removed the police tape and allowed traffic to return to the Avenue.

Citizen provided an update... the info about a lack of an arrest contradicts the Post's coverage ... 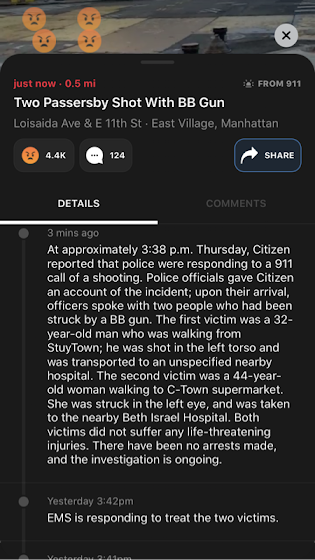 The Village Sun received more details from police sources, including that it was in face a .22 and not a pellet gun used in the shooting.

Police sources also confirmed an arrest in the case, which happened on Saturday when police cuffed Tyshawn Morris, 21, of Albany, N.Y.

No word on a motive.

Wasn't there a spate of pellet gun shootings a few years back around Ave D & 4th St? I seem to remember it turned out to be some kid shooting at people on the street from his window.

This is the national sport now by the NYPD: close an Avenue that buses are running on and do not accommodate public transportation: inconvenience thousands of people for hours just to show you’re “doing something “. Last week they closed Av A till 6PM for the shooting that took place at 3AM! How much time does it take to investigate a crime scene (many hours when most of the time you’re standing there doing nothing).

Wow the NYPD sure knows how to throw an OT pay party!

Looks like the gun was at least a .22 caliber because the gunshot to the torso sent him to the hospital.


How terrible to complain about the inconvenience.
True its an inconvenience, but its the larger picture
here that is the issue.
The Mayor is doing nothing for its citizens !
What are the cops supposed to do then ?

@Linclons Blog. You could be right. The cops changed the weapon description from a BB gun to a small caliber weapon once they got on scene. The murder on 7th street las week was with a .22, so “small caliber” is small comfort when someone is shooing It at you.

The blame should be put squarely on the individuals not on the Mayor. he is not their father. They are directly responsible for their own actions, and they don't have to worry about bail now thanks to another brilliant move by Lord Cuomo - oh, but he built a new mall at LaGuardia!

Nope, police are saying a BB gun. Some info here on second victim.

EV Grieve how truly loyal are you to the east village .we notice that you never report the long island trouble makers coming to our community terrorizing the community.. you know who they are.. are our new east village blog will rival your blog to expose them and we will not cover up from them... unlike you.

I worked at that horrible bar East Village Tavern for a few months and the someone was shooting at us with a BB or pellet gun on several occasions. This was summer/fall 2019.

@Anon. 5:41 from January 21st - Good God, honey, what have YOU been smoking? Or are you just certifiable? How the hell is Grieve supposed to know who "the long island trouble makers coming to our community terrorizing the community" are? Yeah go start your own blog, see how much work it is, realize that no one is reading it because we have this source of vital neighborhood information, and shut yourself down. And if your writing skills as evinced in your post are any hint, it won't be a long time coming.