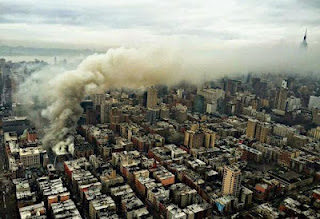 The three people a jury found guilty in the deadly Second Avenue gas explosion are expected to be sentenced tomorrow (Jan. 17) — one week later than originally reported.

They each face up to 15 years in prison.

The sentencing was originally set for Jan. 10, but was pushed back one week for unspecified reasons.

There are still civil actions making their way through the courts. Hrynenko and her companies have reportedly been hit with a handful of lawsuits.

Previously on EV Grieve:
• Details on the guilty verdicts in the 2nd Avenue gas explosion case
Posted by Grieve at 4:30 AM

Woman killed today in Queens by plywood falling off a "construction" site. They are killing us. Literally.

We still don’t know what happened to her son Michael Hrynenko, who died mysteriously not long after he was arrested on a DUI. Was it a suicide? An overdose? An accidental death? We never learned since they kept it private. And the media didn’t investigate. Meanwhile, the deaths of the two young men killed in this horrific explosion were as public as it gets. This is just another example of the kind of privilege the rich always receive. Let’s hope they don’t get the same kind privilege when they are finally sentenced.

I hope all three get the book thrown at them by the sentencing judge. They all need to spend time in jail to contemplate the error of their ways.

It makes me so angry that right now some corporate real estate development company is putting overpriced luxury rentals and condos on that very spot and benefiting from this whole tragedy. The new building should’ve been a nonprofit for the community or at least middle-class housing.