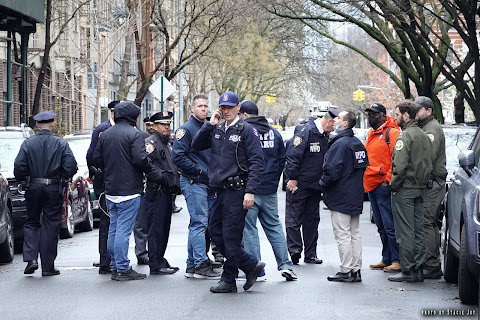 Photo from 9th Street on April 6 by Stacie Joy
Local City Councilmember Carlina Rivera is demanding an immediate end to "the dehumanizing homeless encampment sweeps" in the East Village and throughout New York City.
The demands came in a letter that Rivera sent to Mayor Adams this past Thursday... 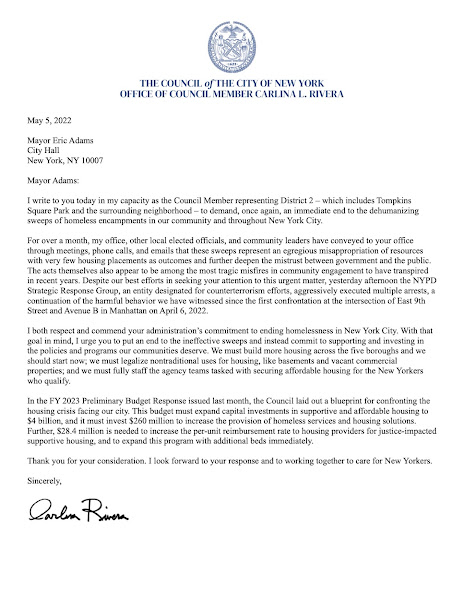 It reads in part:

For over a month, my office, other local elected officials, and community leaders have conveyed to your office through meetings, phone calls, and emails that these sweeps represent an egregious misappropriation of resources with very few housing placements as outcomes and further deepen the mistrust between government and the public. The acts themselves also appear to be among the most tragic misfires in community engagement to have transpired in recent years. Despite our best efforts in seeking your attention to this urgent matter, yesterday afternoon the NYPD Strategic Response Group, an entity designated for counterterrorism efforts, aggressively executed multiple arrests, a continuation of the harmful behavior we have witnessed since the first confrontation at the intersection of East 9th Street and Avenue B in Manhattan on April 6, 2022.
I both respect and commend your administration's commitment to ending homelessness in New York City. With that goal in mind, I urge you to put an end to the ineffective sweeps and instead commit to supporting and investing in the policies and programs our communities deserve. We must build more housing across the five boroughs and we should start now; we must legalize nontraditional uses for housing, like basements and vacant commercial properties; and we must fully staff the agency teams tasked with securing affordable housing for the New Yorkers who qualify.

A Community Board 3 committee drafted a resolution in support of the asks of the letter, which will go to the full Board for a vote on May 24.
The NYPD and other city agencies have continued with their sweeps, with at least seven on the group of several unhoused residents staying in tents on Ninth Street between Avenue B and Avenue C under the sidewalk bridge at the former P.S. 64. There was yet another one — unannounced — yesterday on Ninth Street that led to more arrests.
According to city stats cited by The New York Times, there have been more than 700 cleanups from March 18 to May 1 — many of them of the same site multiple times — and 39 people have accepted the placement into shelters.
"Our teams are working professionally and diligently every day to make sure that every New Yorker living on the street knows they have a better option while ensuring that everyone who lives in or visits our city can enjoy the clean public spaces we all deserve," Mayor Adams said in a statement last week.
And as the Times noted: "Several videos of officers roughly handling homeless people and their belongings have circulated widely on social media, complicating Mr. Adams's attempts to portray the dismantling of encampments as something being done for the good of the homeless people themselves."
Unhoused residents have said that the shelter system is not safe. Read our interviews with some of the Ninth Street residents here.
Previously on EV Grieve:
• Report: 2 arrested in latest East Village encampment sweep
• Standoff on 9th Street
• In Tompkins Square Park, speaking out against the city's sweeps of unhoused encampments
Posted by Grieve at 5:20 AM

Legalizing basements isn't going to make drug addicts and mentally ill people productive citizens. Nor is it fair to the rent paying non-homeless who live in those buildings. However, permanent camp sites on city streets can't be allowed is it will just be a magnet for more homeless and warm weather Crusties from out of town. I'm not sure what percentage of homeless can be made productive, but it seems like there will always be a never ending line of dead enders for whom there is no solution.

Carlina Rivera continues to disappoint. Not only was she one of the passionate arbiters of the East River Park Development (aka the East River Park Destruction), she now wants to upend our lives once more. Where was this opposition demonstrated in this letter conveyed before the city tore up those old trees? Or that stretch of land that was so beloved by tax payers like us whom voted for her in her first term? This very letter to cease the end of encampments is futile. I, like many of my fellow neighbors, don't wish to see them for many are drug dens and unsanitary conditions that we are exposed to. I'll leave the latter to your imagination. A lot of what I have witnessed and stepped over is gross and dangerous. I do have compassion for these people, but a majority of us work, pay taxes and bills, and don't need or want to interface with encampments. And as I have commented on this thread before, many refuse help or assistance either due to mental illness, pride, addiction, or apathy. Our city has failed us. Our city has failed them. Clearly they can and should deliver more resolve which impacts everyone in the long term. I just fail to understand where our tax dollars go to. We are the largest city in the US. We can do better than this.

Ironic, given that the only development she has so far supported has been luxury condos. I guess she has her eye on either her next City Council re-election or higher office.

I did not vote for Carlina Rivera last election, and encourage my fellow East Village residents to also consider other alternatives next opportunity.

Seriously? Stop the sweeps but no suggestions of alternatives? If you're an angry resident like me please email District2@council.nyc.gov

This is insane! Is she suggesting we just allow encampments? This will just lead to more encampments!!! What on earth?!

The thing is, the city is spending so much money on these "sweeps" it would be cheaper just to build some damn housing.

Rivera is term limited. She's running for Mayor. Or Public Advocate, which is the office to seek when a city pol gets told by the powers that be to stay in a holding pattern.

An entirely ineffectual letter heavy on performative do-gooderism. The City can't remove homeless encampments because we HAVE TO BUILD MORE PUBLIC HOUSING. Which we're getting together right now, huh. I mean, that's not a heavy lift or anything.

Or squat storefronts? WTF? Storefronts as subsidized homeless shelters? woo hoo Or market rate? That might work ... but for zero of those sleeping in tents. Basements? Market around here would be high three figures minimum with a slop sink for a bathroom. There's no such thing as "affordable housing" for the vast majority of the homeless on the streets without 100% subsidies. But hey rent me a live in storefront with a lease for 1k / month. I'll certainly sleep in the park in a sleeping bag for a month to qualify.

Classic liberal small ball "DON'T JUST DO SOMETHING. STAND THERE!"

That said, maybe some new rules about impounding street possessions could work. Tagged trash bags to a warehouse rather than immediately into the sanitation truck. But if you're on the street and the cops say move, move. You want a permanent spot, pay rent or camp somewhere that isn't the center of the city.

Society, politicians and policies failed these people. The police are called in to “fix” the problem because of all the prior listed failures, then are scapegoated by the very politicians who do nothing to address this issue. Unless you get to the root of the problem and develop a comprehensive solution, which I am not intelligent enough to identify, this cycle will keep being repeated.

There are sweeps in the east village? Could have fooled me. The intersection of 14th and 1st is a daily disaster…

Seriously. If anything, we need more sweeps.

Carlina will become the first female mayor of the city. Mark my words. Not happy about it. But I think this is what she has always aimed for.


I believe because of redistricting later this year, Councilwoman Rivera can run for one more, two year term. After that she has expressed interest in following her mentor Alexandria Ocasio-Cortez by running for the seat currently occupied by Congresswoman Nydia Velázquez in the U.S. House of Representatives.

However the big problem residents of District 2 have faced — long before Rivera arrive — was when we were redistricted in the late 1980s.

The powers-that-be sought to create what they called “a Spanish language district” in the Lower East Side. They split the largely Jewish, middle class vote by removing the firmer Jewish Merchant Houses along Grand Street and placed them in District 1. They also removed the other dense population of Jewish, middle class voters in Stuytown & Peter Copper by making it their own district.

Finally, to drive the message home, they moved 70% of the polls in our district into NYCHA or NYCHA adjacent buildings.

Not one of those council members have ever looked beyond NYCHA when it comes to running their district — and as a result we have the largely dysfunctional and embarrassment of a district that we have today. Meanwhile parts of Union Square, Kips Bay, Murray Hill & Gramercy park are still included in our district— and those residents feel they have been completely ignored by Rivera.

"those residents feel they have been completely ignored by Rivera."

Rare as it may be, some times feelings and the truth are one and the same. But, then again, I feel like all of our politicos do not run the city to serve the people who actually pay their salaries.