Another rally to return the former P.S. 64 to the community 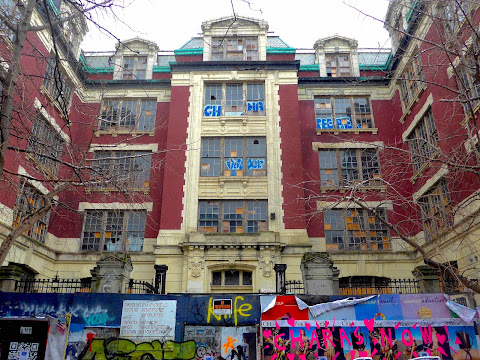 Photos by Peter Brownscombe
On Sunday afternoon, several local elected officials, community activists and residents gathered on Avenue B at Ninth Street to rally for the return of the former P.S. 64 (aka CHARAS/El Bohio) to the community ... 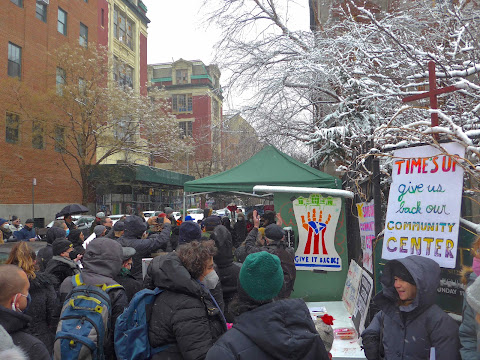 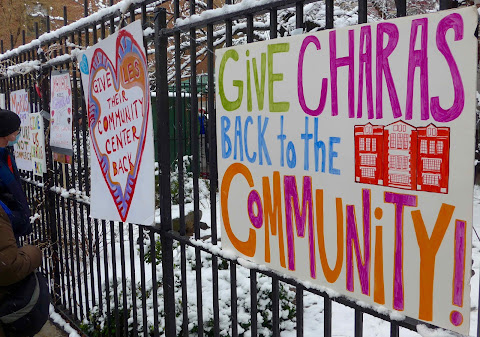 Last month, Supreme Court Justice Melissa Crane ruled that Madison Realty Capital can move forward with a foreclosure against building landlord Gregg Singer after years of delay.
When this news circulated, several sources EVG spoke with said that the report was expected. At this point, though, sources said what happens next, or what this means for the future of the building, is anyone's guess.
However, the answer is clear for the group members — nearly 100 strong — in attendance Sunday afternoon.
"CHARAS was the heart of the community, where all could gather, learn, create and celebrate," said Chino Garcia, co-founder, CHARAS/El Bohio Community Center. "We urge the city to seize this opportunity to right the wrongs of the Giuliani administration in sending CHARAS to auction and restore this once vital institution."
The building at 605 E. Ninth St. between Avenue B and Avenue C became the CHARAS/El Bohio Community Center after the school left in 1977. The group was eventually evicted in December 2001 when Singer took over as the landlord. (He bought the property from the city during an auction in 1998 for $3.15 million.)
Singer has wanted to build a dorm here.
As Gothamist reported, a rep for Singer distributed a press release at the rally stating that "if approved, the dormitory plan would inject more than $20 million into the economy of the local community. The developer blamed local politicians for halting development and creating 'a vacant eyesore in the community.'"
There has been a call to return the building for community use in years past. Given this movement some hope: then-Mayor de Blasio's statement at a Town Hall on Oct. 12, 2017, that the city would take steps to reacquire the building. According to published reports, the Mayor said he'd work to "right the wrongs of the past."
Those plans have never materialized, and it has sat empty these past 20-plus years.
It's not known where Mayor Adams may stand on the issue.
Meanwhile, other local elected officials made their feelings known...

Our treasured CHARAS/El Bohio was and continues to be a galvanizing force for good in the East Village.

Proud to show love today with friends and neighbors, and look forward to working with @NYCMayor to return this cherished space to the community, its rightful owner. pic.twitter.com/V2FrDePaPh

Looking forward to working with @NYCMayor to preserve our beloved CHARAS / El Bohio Community Center. There is no reason why a precious building should sit vacant for decades while the need to connect families to services and resources is high. pic.twitter.com/0b9nVdidiR

On this Valentine’s Day Eve we aren’t asking for flowers, or chocolate or even a spa day, we’re asking for the return of the CHARAS/El Bohio Community Center!

We’ve been fighting for 20+ years & we won’t stop until it’s once again serving the people of the Lower East Side. pic.twitter.com/9vCChszQCD

Tonight at 6:30, CB3's Land Use, Zoning, Public & Private Housing Committee will receive an update from the Charas Steering Committee. The public may attend via Zoom at this link. (This is the fourth item on the agenda.)
Posted by Grieve at 5:15 AM

"There has been a call to return the building for community use in years past." - According to the 1993 terms of sale, that was the ONLY thing the building could be used for; not as a dorm, a condo, or anything else Singer has proposed over the years. Community use. Already something that was necessary in the area pre-pandemic, but how much moreso now?

Listening to the testimonials that day made me realize what a jewel this building/center was for the community. People spoke of how this was a place where all were welcome, free classes in music, arts, etc... and probably most impressive a place for young people to be positively influenced by all of this. There was no better outreach structure in place at the time and it really was a travesty and criminal of the Mayor of that time, stole it from our community.

There was no better outreach structure in place at the time and it really was a travesty and criminal of the Mayor of that time, stole it from our community.

And unfortunately, totally unsurprising. (I was one of the people who prepared to do civil disobedience the day of the sale.)

Now a generation of kids and young adults who did not benefit from a useful arts space in a neighborhood that more than earned its place for an art-based community center, and why? Because of politics, a short-sighted mayor who did not care, and greedy real estate interests. All these politicians say over and over again how much they want to care for people and then they treat neighborhoods in these abysmal ways. It's just lip service. The RE lobby/interests always win in the end and neighborhoods and people in them suffer. I had hoped in vein that since the city took our park that someone somewhere could find a way to return this site to its former use. Heartbreaking.

They were even hosting job application and training events for teenagers from the neighborhood which nobody has even done , either then or now. I photographed one of the workshops for the NY Times and the teens were happy for the attention.

The only way to re-acquire the building is for the city to pay FMV in an open market transaction. Even if the acquisition is through eminent domain just compensation is required. So the question is whether the city believes the acquisition, surely in the 10s of millions, and the subsequent rehabilitation of the building, again surely in the 10s of millions, is warranted to reestablish a community center. Given the extreme need for affordable housing and other pressing social needs it is highly unlikely the city will commit the necessary resources. So don’t get your hopes up.

Thank you to all the elected officials and community organizers that showed up in a snow storm to prove their support to return Charas to the community. Thank you to the 100 plus neighbors that bundled up to stand united in their support in the snow. The turnout would have been even larger if the rally had been the previous day with 52 degree weather. We need Charas community center more than ever after the Boys Club on 10th and Avenue A was closed and sold to real estate interests. To combat the growth of gangs in the E.V., give the kids/teens safe places to gather with activities. Give seniors a center with wellness and art classes. Give the community a clean, free or low cost space for yoga and dance classes, author readings, art galleries for local artists, and so much more. We don't need a high-rise dorm or luxury housing tower with more population density in the East Village; we need a community center!

I’m still hoping they can turn this into something that the whole community can enjoy: a casino.

In addition to the acquisition and re-hab of the building which as noted by 1:32 pm would be a great deal of money staffing, maintenance, security and insurance would be another long term boatload of money. Without some kind corporate or private sponsorship I don't see this building reopening exclusively as a community center. Mixed use with some type of retail would seem to me to be the only viable option. It's not 1977 anymore.

Turning this building into 100% community use would make this neighborhood sparkle and shine. There is a housing crisis in the city however this building is not part of the solution, if it were renovated. The result wouldn’t be many more apartments but a few luxury apartments so the building is best out to use as a community arts space. Especially since it’s so close to the park which NYC Parks barely has the capacity to maintain. Let alone mention the destruction of our East River Park has left the area without needed community space. Not everything in Manhattan has to be a capital investment for citywide issues.

I wouldn't get my hopes up about Epstein and Rivera advocating forcefully and effectively for community use of Charas: they won't even advocate for real air quality monitoring or construction oversight at the current horror that is East River Park. Instead, construction trucks are driving along the esplanade, which is supposedly open to the public, more trees than originally planned are being cut down, air quality sucks, residents coughing, no bike lanes or effective and safe pedestrian detours.