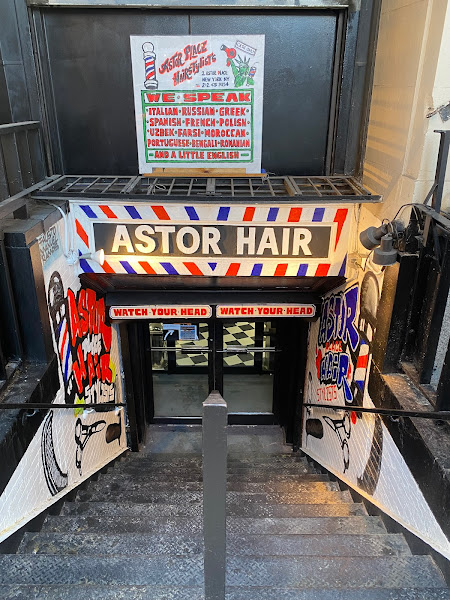 Photo yesterday by Steven
Astor Place Hairstylists was set to close in late 2020 after business plummeted by nearly 90 percent during the pandemic.
However, as announced in November 2020, a group of investors featuring financier Jonathan Trichter, former Hillary Clinton aide Howard Wolfson, pollster Jefrey Pollock and gaming mogul Jeffrey Gural, who's also the landlord at the address, put in the money to keep the shop afloat. (Gural was also said to reduce rent at the time.)
Yesterday, details about a new 10-year lease for the subterranean shop that dates to 1947 at 2 Astor Place (aka 740 Broadway) were announced.

"Astor Place Hairstylists is a New York institution," said Gural, chairman and principal of GFP Real Estate. "As a long-time client I am delighted to see that the business has not only pulled through the worst of the pandemic but is able remain in the same location they've occupied for more than 75 years. They are an important tenant, and we look forward to their continued success."

According to the release, Michael "Big Mike" Saviello, the longtime manager, is now one of the owners.
Previous co-owners John and Paul Vezza retired at the end of 2021, making it the first time since the opening that a Vezza family won't be involved with the shop.
Previously on EV Grieve:
Documentary offers a day in the life of Michael Saviello, longtime manager of the iconic Astor Place Hairstylists
Posted by Grieve at 5:00 AM

awesome!!!!love to hear some good news.

Most folks here dump all over landlords in their comments. I certainly hope the same at least give this guy some credit. Fair is fair.

Got my first buzz cut there, in the spring of '91.I walked in with shoulder-length hair and asked the guy to buzz it down to 1/8 inch. He said nothing, just started sheering.Felt great, especially as the weather warmed up.Common now, but a bad ass look back then.

I got my first ever haircut there, as a baby, almost 35 years ago. My mother kept a polaroid of John (I think) cutting my hair, with a lock of hair taped to it, on the fridge for many years after. I don't get my hair cut there anymore, but I'm really glad they're still around.

Who knew that rich, powerful people, along with landlords could combine forces to do some good in the EV!? If you listened to what the EVGrumps have to say, you'd think this story were pure fiction!

Great news! This is a true NY institution that would never be able to survive without some generosity -- try finding a haircut that cheap anywhere in the country!

@4:25pm: It's not that it's "fiction" - it's that it *ought* to happen more often, given that many owners of large buildings are well able to afford to this!

If I had hair this is where I would go

At last an EV success story! An institution saved! Long live the East Village! For today at least.

I'm really glad they continue. I have memories going back to the 1980s there.