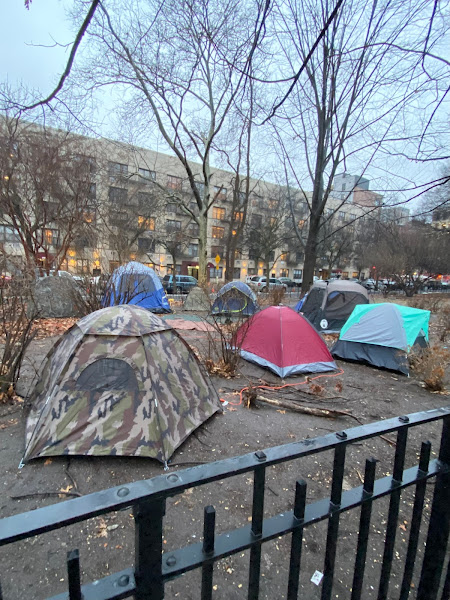 Photos by Steven
As previously mentioned, crews for "Law & Order" will be filming along Avenue A and in and around Tompkins Square Park tomorrow.
Ahead of that, a handful of tents were erected along the Park's Seventh Street entrance between Avenue A and Avenue B ... 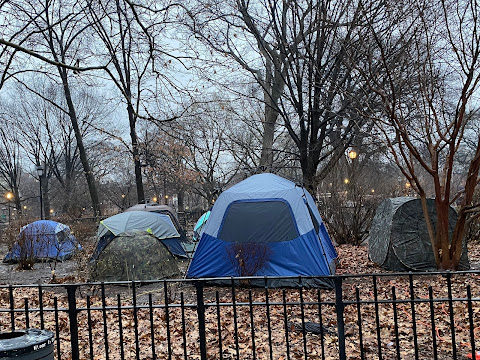 The long-running show seems to be keeping with the "ripped from the headlines" approach to the plot... late last summer, a dozen makeshift tent encampments arrived in this same general vicinity... a Department of Homeless Services-led entourage, featuring the Department of Sanitation, the Parks Enforcement Patrol and the NYPD, conducted a "clean-up" in and along Tompkins Square Park in early November.
Several unhoused people are still sleeping in tents in portions of the Park... not too far away from where the filming will take place... 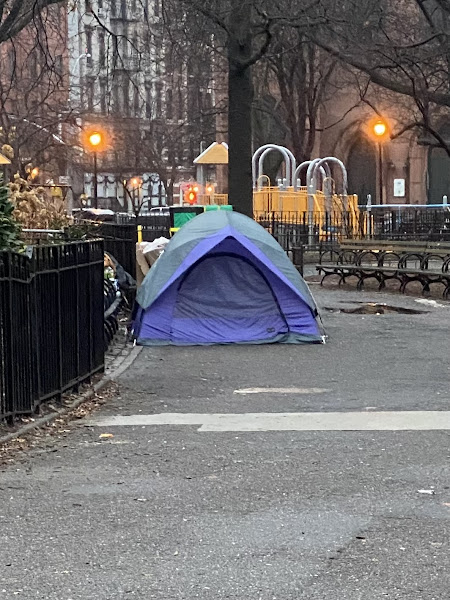 And this isn't the first time a film crew has recreated a tent city in Tompkins.
Posted by Grieve at 6:00 PM

I doubt there'll be much of a response from this neighborhood, unless they mess with the dog run. Setting up a made for TV mockery of people's hardships living in this bone chilling winter.

Here's a throwback from 11 years ago, for when Law and Order SVU did a mock occupation of Foley Square and was shut down by Occupiers from OWS. This was a few weeks after the cops destroyed the real encampment in Zuccotti/ Liberty Park.
https://youtu.be/0hEaA3zdvwM

It seems callous and exploitive. Happy to see the film crews at work in the 'hood, though I wish the subject matter were different.

Art predicting reality. it won't be long before this is a thing in our parks. The city and state needs to address homelessness, which has been amplified by the pandemic. Drug addiction, mental illness have reach new levels.

There has been a tent there for months with a power cord to a light post.
Now he just blends in.

I wish they would mess with the dog run- it stinks to high heaven - possibly higher! not to mention all the dog people running their dogs in play areas used by schools for outdoor recess activity. this is even with signs that say "no pets"!!!
guess this a whole other GRIEVE issue....

I can’t stand the folks who insist on taking their dogs into the for-humans area that clearly says “no dogs”. It boggles my mind that they value their private off-leash dog time so much that can’t use the dog run that is less than 7 seconds away